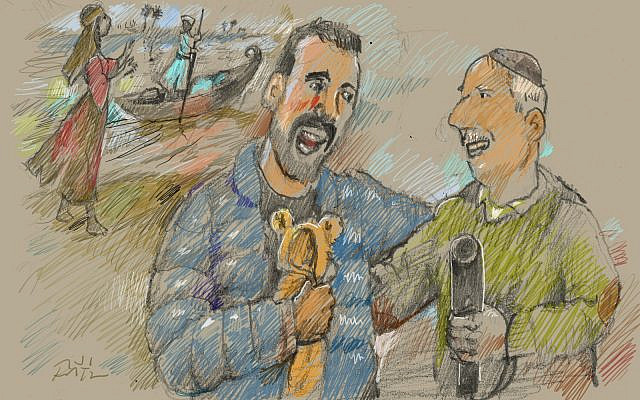 My friend Shadi went to the mall to pick up another bear onesie for his son.

(Shadi has a thing for bears.)

On his way back to the parking lot, Shadi saw Yaakov the security guard cozily ensconced next to the metal detector in a metal folding chair. Black yarmulke jauntily affixed to his sparse grey hair, unlit cigarette dangling from his fingertips, and cup of coffee on a rickety stool beside him.

According to Shadi, Yaakov was humming something in Hijaz — the Arabic scale.

“I’m bored,” Yaakov told Shadi as he passed. “Do you know any songs in Arabic?”

Shadi began to sing the first song that popped into his head — an old, obscure Iraqi love song that he remembered hearing at his grandparents’ house in the Old City, “Maihana Maihana.”

“The song is about a girl named Washla,” Shadi told me. According to the story, Washla loved a sailor named Abdullah. Abdullah had a small boat he used to carry seeds and animals for business along the Euphrates. Abdullah was respected and loved by all who knew him. “Basically,” Shadi explained to me, “Abdullah had charisma.”

Abdullah also had a gorgeous voice, and people would line up by the shores of the river to hear him singing as he’d pass in his little boat at sunset.

Washla loved Abdullah, but she never told him — she only confided in her friend, Maihana. Anyway, Abdullah disappeared one day on the river, never to be found, and Washla was heartbroken. She sat by the muddy banks of the Euphrates at sunset as Abdullah’s ship passed without him on it — the silence falling all around them without him singing from the deck — and she wept bitter tears with her friend Maihana beside her.

So Shadi sang the first line of the song, “Maihana Maihana…”

Yaakov’s eyes lit up, a smile stretched across his face, he clapped his hands like a child, and to Shadi’s amazement, he replied with the next line:

“Now the sun is going down, and my love will never return.”

Shadi and Yaakov fell into each other’s arms.

“How do you know it?” Shadi asked Yaakov in Arabic. “Where are you from?”

“This is a song from my childhood! I was born in Iraq,” he replied. “It was beautiful there when I was a child, everyone together… but now it’s a disaster. How do you know it? Are you Iraqi?”

“No,” Shadi told him. “I’m from Jerusalem, I’m Palestinian. My grandfather used to sing it when I was a little boy.”

“My grandfather, too,” Yaakov told Shadi. “Shukran, ya Ibn Baladi. Thank you, son of my homeland, for reminding me of my childhood.”

“Wait, but he knew you aren’t Iraqi,” I said when Shadi told me this story later. “Why did he call you Ibn Baladi?”

Shadi shrugged. “Homeland is bigger than a country. The feeling I shared with this guy, it was like the feeling of missing our countries — of homesickness and longing for the past.”

“Ah, the Welsh have a word for that,” I told him. “Hiraeth. It’s like homesickness and nostalgia all in one.”

“I don’t know about the Welsh,” Shadi told me. “But singing with this guy, Yaakov, I went back to in my mind to my grandfather’s house in the Old City where we listened to this music together, where I first heard this song, sitting by the old heater and dipping fennel ca’ak in steaming glasses of mint tea. And this guy, it’s like maybe he remembered the same thing from his childhood in Iraq… and we both missed a time that doesn’t exist anymore, and a place we can’t reach, maybe it never existed as perfectly and as sweetly as we remember, but in our memories it exists all the same.”

Shadi was quiet for a moment.

“These days with so many tensions between us all in Jerusalem, it was nice,” he said. “This guy may be a Jew from Iraq and I may be a Christian from Jerusalem… I am pretty sure we don’t agree on anything politically, either… But, in that moment together, united in our memories, we were both Arab.”

*Shadi is a pseudonym. But he is a real person and I write about him from time to time.

You can read more about him here:

About the Author
Sarah Tuttle-Singer, author of Jerusalem Drawn and Quartered and the New Media Editor at Times of Israel, She was raised in Venice Beach, California on Yiddish lullabies and Civil Rights anthems. She now lives in Jerusalem with her 3 kids where she climbs roofs, explores cisterns, opens secret doors and talks to strangers, and writes stories about people. Sarah also speaks before audiences left, right, and center through the Jewish Speakers Bureau, asking them to wrestle with important questions while celebrating their willingness to do so. She also loves whisky and tacos and chocolate chip cookies and old maps and foreign coins and discovering new ideas from different perspectives. Sarah is a work in progress.
Related Topics
Related Posts
Sarah Tuttle-Singer