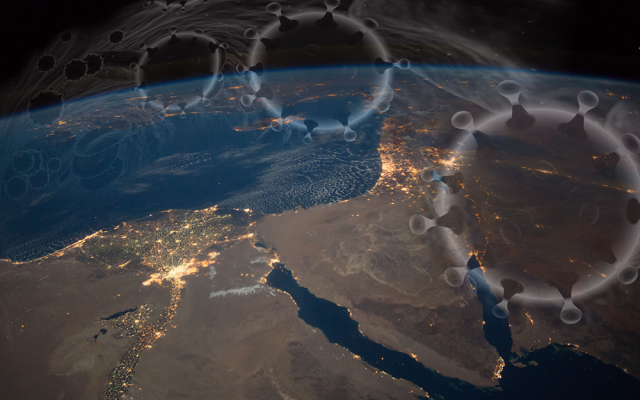 It was a bit surreal. Waking up this morning, the chirping of birds seemed unnaturally loud. The droning of bees could be heard over the noises of rush hour traffic…

Except that there was no traffic. I looked out my window toward the front gate of my community, where a traffic circle forms a daily bottleneck of commuters on their way to work. The road was empty. A single car drove by on the street below, seeming much louder than one car should be, and then the silence returned. Bees humming, birds chirping, and from a house down the street a dog barking.

Yom Kippur, I thought. It feels like Yom Kippur…

The trick of going viral

From the virus’s point of view, it’s a stroke of genius: keep your most efficient hosts healthy, happy—and utterly clueless that they’re infected—the better to spread your payload hither and yon. Hitch your wagon to those who are as yet untouched by any sense of their own mortality. Incapacitate only those who aren’t moving around as much, who are thus less helpful in spreading your misery around.

The pandemic of 1918 was different: the “Spanish” flu primarily impacted the young and the healthy, sparing the older adults, who had long ago been exposed to a similar strain. In some cities in the U.S. news of the outbreak was suppressed for fear of “spreading panic”. In Philadelphia, tens of thousands of people turned out for a huge war bond parade. Two days later, the epidemic was out of control; the death toll in Philadelphia was around 14,500 people. Worldwide, as many as 50 million people died.

Back then, the kind of advance warning, genetic sequencing, and remote sensing that we have now was unimaginable. But above all, the flow of information that we take for granted simply did not exist. Had parents in the fall of 1918 learned that a disease was spreading that would preferentially target their children, it’s not hard to imagine that the outcome might have been different. If the parents didn’t move quickly enough to isolate their households, the grandparents would have!

And now, the situation is reversed. COVID-19 is most dangerous to those over 40, and the mortality risk goes up exponentially with age, even without underlying illnesses such as high blood pressure, heart disease, etc. Now, the information is out there. Once tragedy had struck in Wuhan, the entire world was alerted as to what was coming. The virus’s genome was sequenced, infections were mapped, and death rates computed. The information was out there, and one could either act on it or not.

According to some estimates, roughly 15-20% of the population may require hospitalization, with around 5-10% requiring respiratory assistance. If everyone gets sick at the same time, many of those needing respiratory assistance will die, simply because the health system is overwhelmed. If the influx of patients can be slowed enough for the hospitals to deal with those worst off, most will survive.

Lacking a vaccine for this particular virus, the only sure way to keep the number of cases low enough to avoid overwhelming the health system is social distancing, in an attempt to “flatten the curve”—by slowing the spread enough to leave enough doctors and nurses on their feet to deal with the next wave.

But that’s easier said than done. The tragic situation in Italy right now, where doctors have been forced to decide who gets life support and who does not, should be an example to us all. Italy, like Israel, has universal healthcare; no one gets turned away. But, just as in Israel, there are only so many doctors, only so many hospital beds, and only so many respirators to go around.

In a heartfelt plea for others to learn from Italy’s plight, Italian journalist Mattia Ferraresi writes:

What has happened in Italy shows that less-than-urgent appeals to the public by the government to slightly change habits regarding social interactions aren’t enough when the terrible outcomes they are designed to prevent are not yet apparent; when they become evident, it’s generally too late to act. I and many other Italians just didn’t see the need to change our routines for a threat we could not see.

In Israel, the newest regulations require non-essential personnel to work from home, the cancellation of public events, and the curtailing of social gatherings. Malls and coffee houses are closed, as are schools and universities. People are requested to keep a distance of two meters from each other, which ironically enough, corresponds to the “dalet amot” (four cubits) of personal space defined by the Talmud.

As the example of Italy shows, these restrictions are neither easy to enforce, nor popular. They are going to weigh most heavily on the young, for whom these outlets are an essential part of their identities—the very same people who may carry the virus without even knowing it, and who may have difficulty seeing the need to stay home.

If the virus were an intelligent being, it might very well be rubbing its RNA strands together in glee and cackling: “Let’s see if you can actually do it!”

The real test of societies worldwide is simply this: Can those who are still living in the age of invincibility acquire the wisdom of mortality quickly enough to save their elders? Can children and grandchildren be as protective of their parents and grandparents as those elders would be of them?

In many Western countries this challenge is complicated by demographics: populations are aging, with too few births to sustain the economy at current levels. For other countries, social cohesion has already been weakened by the decline of family bonds.

And what of Israel? Our people’s founding “constitution” contains the command: “Honor your father and your mother”, not to mention “Rise before the aged, and honor the elderly”. How well do those values penetrate our so-called “secular” society?

I guess we’re about to find out.