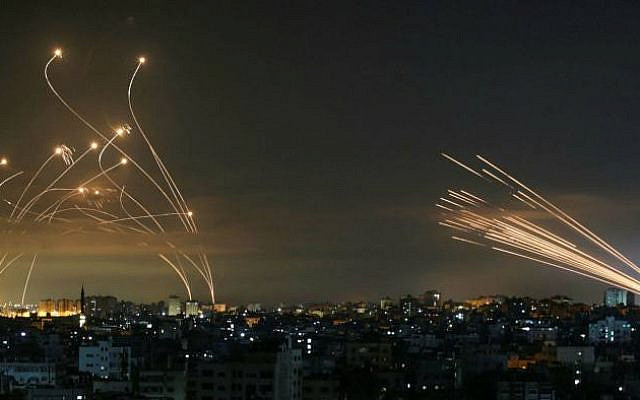 May 2021: On the right, incoming rockets fired by terrorists in Gaza. On the left, Iron Dome in action. (Anas Baba/AFP via Getty Images)

Democratic Representatives forced their House Leadership to pull $1 billion funding requested by the Biden Administration for the resupply of Iron Dome Tamir missiles. Washington is not Israel’s enemy, but the real enemies in the Middle East will be emboldened.

In the last 40 years, Administrations have introduced to Congress military aid requests for Israeli weaponry. Often, Congress even increased the funding, such as an additional $500 million a year for missile defense in 2016. That is why the Obama Administration sought to lock in the sum at $3.8 billion per year over 10 years.

The arrangement reminded me of Pharaoh’s command in the movie The Ten Commandments: “So let it be written, so let it be done.”

Recently, the U.S. Secretary of Defense requested from Congress an appropriation of $1,000,000,0000 (one billion) “which shall be for the Secretary of Defense to provide to the Government of Israel for the procurement of the Iron Dome defense system to counter short-range rocket threats… such funds shall be provided to address emergent requirements in support of Operation Guardian of the Walls.”

The House Democratic leadership tacked the Iron Dome request onto a stopgap budget continuing resolution that would raise the national debt ceiling and allow the government to continue operating through December 3, 2021. A close vote was unavoidable; Republicans were opposed to what they saw as wild spending proposals. Democratic leaders thought that adding the Iron Dome provision would appeal to Republicans. (It is not certain it would have.) But it certainly met with furious resistance from Progressive Democrats.

According to this publication’s New York correspondent, Jacob Magid, “The Squad Reps. Alexandria Ocasio-Cortez, Ilhan Omar, Ayanna Pressley, Rashida Tlaib, Jamaal Bowman and Cori Bush, along with fellow progressives Betty McCollum and Pramila Jayapal, warned House leadership that they would not have their votes if the bill proceeded with the extra $1 billion” for Israel. “This was evidently enough,” according to Magid, “to convince Pelosi and Majority Leader Steny Hoyer to advance the continuing resolution without the aid for Israel.”

The congressional partisan posturing in Washington has undermined the long, traditional bipartisan support for Israel, and that is troubling. I recall in the 1970s, AIPAC’s founder Si Kenen always choreographed the organization’s policy conferences with dinner keynote speakers featuring a prominent Republican and Democrat — such as Hubert Humphrey and Clifford Case, Jacob Javits and Henry “Scoop” Jackson, or Frank Church and Gerald Ford. The tradition continued with AIPAC until COVID canceled the conferences.

Many centrist and pro-Israel Democrats, such as Hoyer, quickly pledged this week to vote on a “stand-alone” appropriation for Israel’s Iron Dome.  “I was for that, said Hoyer. “I’m still for it, we ought to do it.”

As of this writing, President Biden and Vice President Harris have not weighed in on the political clash. The next few days should be a test for the Democratic Party’s leaders, from Biden down to Speaker Nancy Pelosi, who is responsible for the House of Representatives’ bloody mess. Will they permit a squad of anti-Israel and antisemitic radicals to set the government’s agenda?

Will President Biden and Speaker of the House Nancy Pelosi permit a squad of anti-Israel and antisemitic radicals to set the government’s agenda?” 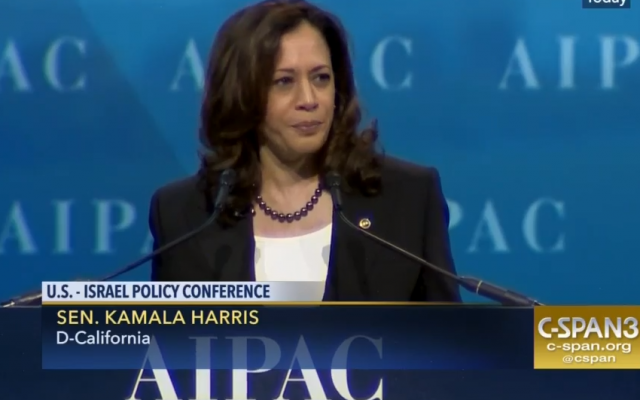 If it is any consolation, the aid for Israel’s essential defensive shield will be appropriated. But, at what cost? Some of the radicals, like Ilhan Omar, may get campaign funds for the 2022 election from her contributors like the Hamas-supporting CAIR PAC of California. However, the anti-Israel action will not win the Democrats many votes and may mobilize strong opposition at the polls. This and other political shenanigans, like the failure to condemn Omar’s antisemitic comments or the refusal to denounce BDS activity could cost the Democrats their House majority. 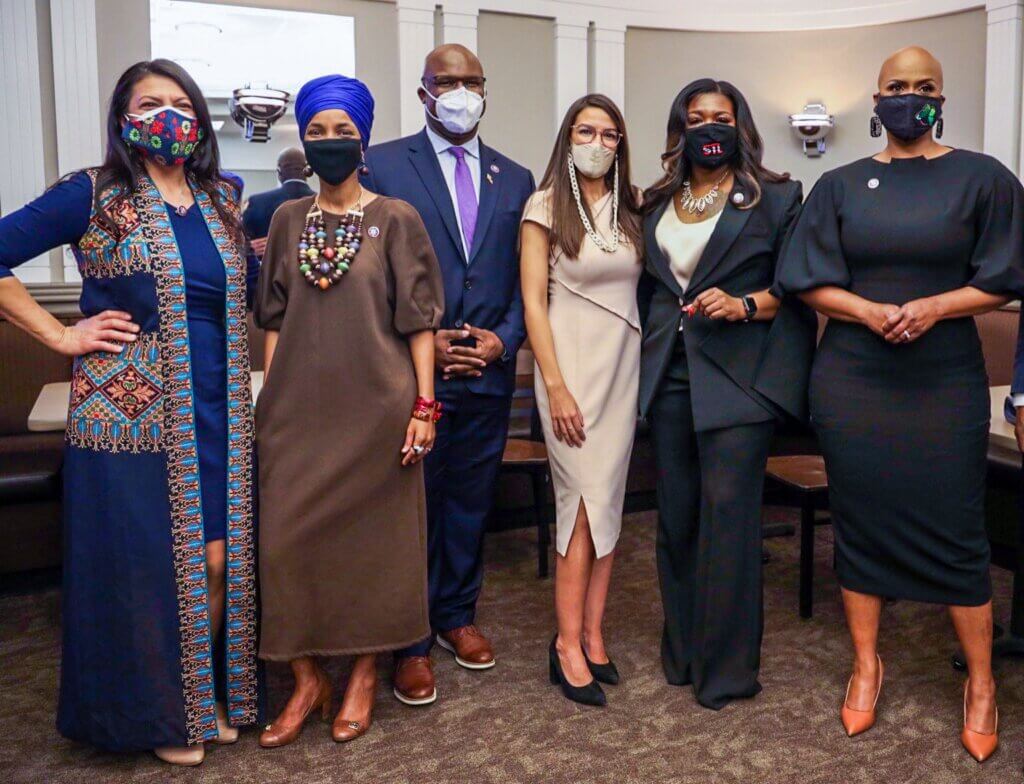 Consider the fact that the Iron Dome’s Tamir/Skyhunter missiles for Israel and the United States will be procured almost entirely through Raytheon Missiles and Defense supply chain. If Iron Dome or other Israeli systems are cut, how many of Raytheon’s 180,000 workers will be out of work? That’s on the Democratic Party.

Will the radical Left offset the opposition that will vote against the “Squad” of anti-Israel members of Congress in 2022? It is very unlikely. 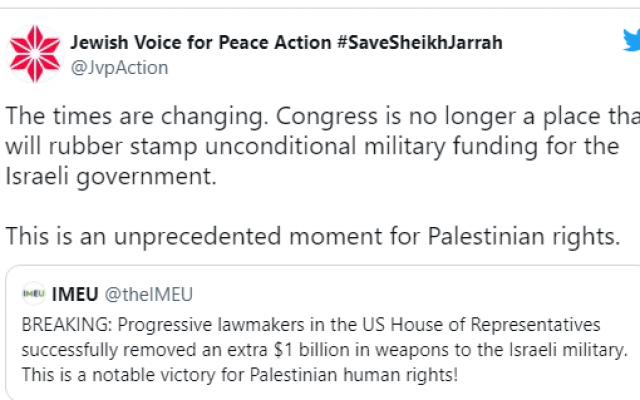 The Washington Chaos Is Not the Danger to Israel. Hamas, Hizbullah, and Iran’s Views of the Iron Dome Vote Are.

Hamas leader Yahya Sinwar and Hizbullah leader Hassan Nasrallah may now believe that Israel’s arsenal of Iron Dome Tamir missiles is limited. Will they keep firing rockets at Israeli civilians until the IDF’s supply is depleted, and Israel will be devastated?

That is clearly what the head of the Iranian Revolutionary Guards believes, especially after the U.S. debacle in Afghanistan.  Qasam Soleimani’s successor, Maj. Gen. Hossein Salami, declared on September 21, “Our enemies are in decline and on the verge of collapse, and we see them gradually fleeing and vanishing and getting out of the sights of the Iranian people.” 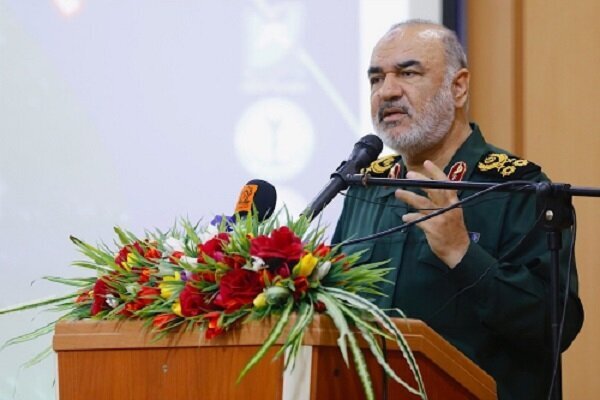 Commander-in-Chief of the Islamic Revolutionary Guard Corps (IRGC) Major General Hossein Salami: “Iran has amassed power to defeat the US hegemonic power. Tiny powers such as the Zionist regime have no place in our calculations.” (Mehr News Agency, Iran)

“When we amass power against the largest military empire in the modern area, namely the United States, other tiny powers such as the Zionist regime have no place in our calculations,” he concluded.