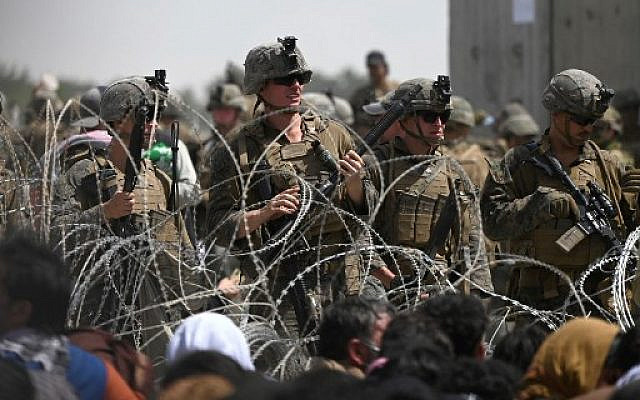 US soldiers stand guard behind barbed wire as Afghans sit on a roadside near the military part of the airport in Kabul on August 20, 2021, hoping to flee from the country after the Taliban's military takeover of Afghanistan. (Photo by Wakil KOHSAR / AFP)

The rapid collapse of the Afghan government in the course of August 2021 shocked the world, leaving shattered dreams and unanswered questions in its wake. The most burning question facing the international coalition that spent twenty years in the act of nation-building in Kabul is: Where did it all go?

The speed of the collapse may have taken coalition forces by surprise, but one thing is certain: the writing was on the wall. While coalition spokespeople painted a rosy picture of the stability of the regime they left behind – providing it with state-of-the-art training and equipment for its military and expressing confidence in its long-term sustainability – investigative reporting revealed another side to the Afghan government: a hollow kleptocracy rife with corruption, dependent on the fickle loyalties of warlords and drug cartels, unable to properly pay or supply its members and security forces, and utterly dependent on foreign aid for its survival. Confidence of the local population in the government and its leadership was non-existent. The Afghanistan left behind by coalition forces was a house of cards, awaiting only a stiff wind to knock it from its foundations.

It appears now that all hope is lost for Afghanistan. Certainly, it is unclear what further international intervention could possibly do to alleviate the dire circumstances we have imposed on Afghanistan’s 38 million residents. Even so, the international community should take note; after all, Afghanistan is not the only place they are currently involved in nation-building. Nor the only place where this endeavor is rotting from the inside out.

In 2012, 19 years after the PLO was officially recognized as the legitimate representative of the Palestinian people, much of the world voted in the UN to recognize Palestine as a sovereign state. Israel still does not acknowledge Palestine’s independence in absence of a final status agreement between the parties.

But even with international recognition, the Palestinian Authority has a long way to go to be considered anything approaching a functioning government.

Like Hamid Karzai’s Afghanistan, the Palestinian Authority functions as a kleptocracy, with public funds frequently diverted to line the pockets of its leaders. So poor is the public regard for the ruling party that it lost the last election it held to Hamas in 2006, and has canceled every election slated to be held since out of fears of losing those as well. Like Afghanistan, it frequently fails to make payments to its public servants for months on end; it fails to actually secure a significant part of the claimed territory and population of Palestine (even beyond the Green Line); and it exists entirely dependent on foreign aid, despite receiving billions of dollars in international contributions since its founding, and having the resources of an entire UN refugee agency dedicated to it exclusively.

Indeed, to those paying attention, the fall of Afghanistan only confirms Israel’s deepest suspicions regarding Palestine, and perhaps the inescapable reason the Occupation continues: the fear that the withdrawal of the IDF would lead to the immediate collapse of Palestine, and a power vacuum to be filled by extremists. This concern has been voiced openly by successive Israeli governments.

Obviously, an indefinite military occupation is unsustainable in the long term. But unlike the US in Afghanistan, Israel has a lot to lose by creating such a vacuum on its doorstep. As a perpetually endangered people living in a shallow strip of coastal land, the Jews of Israel are all too well aware of the precariousness of their position, and their potential exposure to the chaos brewing on their doorstep. No appeal to moral sensibilities will compel them to endanger their homes and loved ones, nor should they.

Following the most recent conflict with Gaza in the spring, Defense Minister Benny Gantz outlined a new strategy for strengthening the PLO and creating an international collaboration to rebuild the Gaza strip. This week, Gantz met with Abu Mazen – the first official government meeting between the parties since 2010 – to lay the groundwork for such a cooperation. The gap in time preceding this meeting is notable, and as with all previous efforts, this latest diplomatic outreach highlights the greatest challenge standing in the way of any diplomatic progress: the need to prop up the legitimacy of the Palestinian government, and for it to consolidate power over all of its claimed territory and citizens.

The picture may seem bleak, but the international community is not powerless to prevent a disaster similar to Afghanistan from recurring in Palestine. It can link its aid to Palestine on anti-corruption and transparency measures to ensure the creation of a stable, representative government, by carefully conditioning and securing the flow of aid money. Decades of wasteful spending have seen international aid flowing straight into the hands of the oligarchs, while Palestine remains an impoverished, empty shell. With proper oversight, that money, and the government it supports, can be made to work for the Palestinian people, to build a homeland that is both durable and sustainable – and a viable peace partner for Israel.

The US can also leverage its aid money to Israel by tying it to the diplomatic process, as it has done on occasion – but this will be useless for as long as Palestine remains a house of cards, since, as noted above, Israelis will never risk withdrawing troops from Palestine until the public is convinced that Palestine is ready to stand on its own two feet.

Old patterns are not doomed to repeat themselves. This can and should be the generation where we break through the impasse, by learning from past mistakes. The first step should be to change the pattern of failure and corruption in Palestine by changing the nature of foreign investments in nation-building. This is the only way to give peace in the Middle East, and the State of Palestine, a true chance to succeed; the chance that Afghanistan never had.