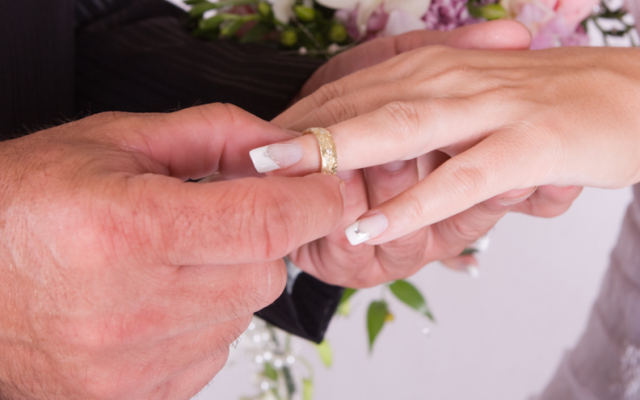 Her index finger and thumb were formed in the unmistakable, universal shape for female genitalia. Taking a small, clean white cloth, she wrapped it around her other pointer finger and inserted it in the “vagina.” She pulled it out with a little twist.

“And that’s how it’s done,” said the rebbetzin with a toothy smile. The rebbetzin, an ultra-Orthodox woman of about 60, was bedecked in any number of gold chains, rings, and bracelets — as well as a rather dashing turban.

We’d just spent the better part of an hour in her all ultra-Orthodox Jerusalem neighborhood apartment going over the Jewish laws of ritual family purity. Among rules addressing when to touch my soon-to-be-husband and when not, I was cautioned to wear dark underwear following my period, which she described as one of the ways in which the rabbis showed compassion for women.

Now she had come to the part in which a woman must perform an internal examination to make sure that she is sufficiently devoid of menstrual fluid and “clean.” Only then could she commence her seven-day waiting period before she would be able to resume sexual relations with her husband.

Ahead of my upcoming wedding, I was required by the Jerusalem rabbinate to attend the rebbetzin’s private class and receive a “petek” (little note) stating I had heard all a young Jewish woman needs to learn before becoming a blushing bride.

And blush I certainly did upon her next question. “Are you a virgin bride? There are ways I can teach you to arouse your husband on your wedding night.”

The first clue that ours would be no sterile courthouse wedding came when we opened up our “tik” (file) at the Jerusalem rabbinate. I was flagged to the side and told to go speak to the woman down the hall. A middle-aged ultra-Orthodox woman sat behind a shoddy desk in the decrepit building — literally in the hallway, as I recall.

She proceeded to ask me the date I had started my last menstruation. Shocked, I stammered out the answer. After she asked me the planned date for our wedding, she cross-checked the two with a table, clucking to herself until, “Aha!” She was satisfied I would not be ritually impure and that the wedding date could indeed be permitted.

She gave me a petek, and sent me back to the ultra-Orthodox clerk for it to be stamped and filed. (My future sisters-in-law later laughed and told me they had worked out the numbers ahead of time so as not to be refused their chosen dates.)

The night before our wedding, I was required to immerse myself in the mikveh (ritual bath). Curious about the experience, I was looking forward to it.

Bare-assed and sparkling clean, I stepped out into the mikveh chamber. There, a woman came to inspect me for wayward hairs, circling my body, before allowing me to enter the ritual waters. (Although uncomfortable, the rebbetzin had at least forewarned me about this very personal inspection.)

It was peaceful. I relished the rare calm after those hectic days of last-minute errands ahead of the huppa. I thought, maybe, just maybe, I would come back here as a married woman.

After I dressed and walked out to meet my waiting mother-in-law, a bewigged, heavily made-up mikveh lady came to greet me. “Kallah, kallah, bo’i,” she said smiling, playing on the words of the centuries-old prayer greeting the Sabbath bride.

She sat me down and in an excited near whisper, told me she always speaks with the brides that come through that Jerusalem mikveh’s door.

“The bedroom,” she told me breathlessly, clasping her chest dramatically, “is a mishkan (tabernacle), kallah. You and your husband-to-be will be performing God’s holy work. There, you will perform the mitzva of pru urvu, kallah,” the commandment to be fruitful and multiply.

Bubble burst, I received the petek intended for the rabbi the next day — and never entered a mikveh again.

This week at the Knesset, numerous women, including MKs, told their own experiences in undergoing the rabbinate-required “kallah classes.”

In a follow-up Facebook post, attorney Elad Caplan, one of the staff members of nonprofit ITIM, an organization which helps Israelis navigate religious bureaucracy, recounted the history of how this onus was put upon Israeli women.

For generations, mothers instructed their daughters themselves in family purity laws, he wrote. The institutionalization of this education began — innocently enough — when, in 1930s Mandatory Palestine, a grassroots group of rebbetzins began instructing youth who had immigrated without their families.

By 1938, Caplan wrote, the National Center for Family Purity in Israel was founded and received widespread support from the chief rabbis. The organization’s connections and influence grew among the Rabbinate and local councils as it pressed for the building of more ritual baths — and pre-marriage classes.

Slowly, after the foundation of the State of Israel, these two requests evolved into the women-only  “kallah classes” and pre-wedding mikveh petek. Both were unofficial requirements well before they formally became a prerequisite for marriage in 2004.

And that’s how I got to sit with the rebbetzin’s freshly wiped hand vagina — and gain a basic knowledge of family purity laws.

Some 15 years later, my one true regret is I didn’t have the presence of mind to get her sex tips, too.