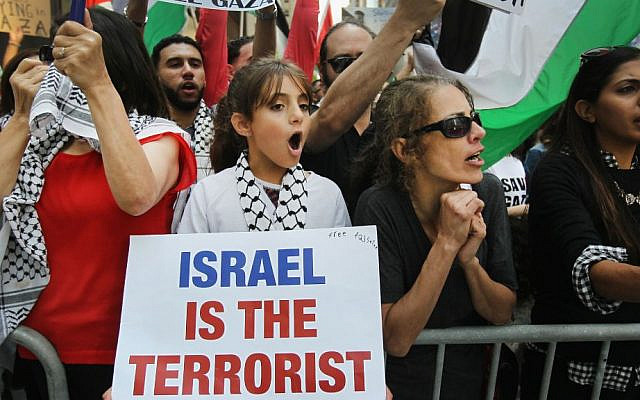 In reacting and speaking out about the tragic violence endured by Israelis and Palestinians in recent weeks, I’ve noticed a disturbing pattern; the adoption, by some political figures on America’s progressive left, of language and frameworks of questionable validity that have, previously, been acceptable only in radical fringe parts of our discourse. Given trends over the past decade, this is not entirely surprising to those who’ve been in ongoing dialogue with these individuals. However, as the Overton Window of left rhetoric in America is shifting, in part due to an increasingly fractured partisanship in American politics, along with a disruption of bipartisanship in the U.S.-Israel relationship, it must be cause for concern.

Allow me to speak clearly in articulating how the current trends in left political analysis and rhetoric are so ill-suited to understanding and grappling with the Israeli-Arab conflict and the Israeli-Palestinian conflict within. Simply put, the American left has embraced moral maps that, while they may provide helpful frameworks for understanding some of America’s foundational and ongoing issues, warp understanding and discourse when applied to other parts of the world.

To use an obvious and current example: The current and ongoing genocide of the Uyghur Muslim people by the government of China is reprehensible. It hasn’t drawn nearly the level of condemnation and approbation in the US as it deserves; our universities continue to partner with the People’s Republic of China, companies still have ties there, we purchase the products of slave labor. But this is a crime that cannot be understood through the lens of racism in American society.

To shift to the Israeli-Palestinian conflict and the rhetoric applied to it by the Western left:

Before systemic racism was the foundational sin of the American project, anti-Judaism was the original sin of Western Civilization. In the civilization from which America is birthed, Jews are the original “other.” We were tortured and slaughtered, demonized and blood libeled, ghettoed and expelled; this went on for nearly two millennia before the consequential and “final” solution of the genocide of the Holocaust.

When the left applies the prism of White Supremacy vs. BIPOC to this conflict and places Jews on the side of the white caste, this assignment is rooted in the limited reality of our unique American experience. This belies the historic treatment of Jews in America and our enduring reality in much of Western civilization.

The Israeli-Palestinian conflict is between two peoples in their shared homeland. The language of colonialism, applied here, is an erasure of Jewish history, the latest erasure in a two-millennia-long effort.

When the left applies the concept of unity among People of Color in order to stand in solidarity with Palestinians and against Jews, it confuses the Jewish experience in America with the reality of Jewishness in the Middle East. If they have never traveled to the region or been in relationship with Israelis, they will only know Jews as we are in America.

While many American Jews are Jews of Color, the vast majority are descendants of those who came to this country fleeing persecution in the European diaspora. After two millennia of rape, a few hundred years of post-enlightenment integration and intermarriage, and this unique American caste system that allowed them into the category of whiteness, it is understandable why the uncurious American would categorize Jews as white.

The reality is that the majority of Israel’s Jews are not “white” as that term is understood in the West, i.e. having European ancestry and the privileged status taken by Europeans in the regions they have conquered.  The majority of Israel’s Jews have always lived in the Middle East and North Africa, among the Arab, Turkish, Persians, Ethiopian and other populations of the region.

None of the above minimizes or should allow us to ignore the reality and the suffering of the Palestinian people who endure profound hardship. We must all dedicate ourselves to affirming their human dignity and their national aspirations for a state of their own. We also cannot ignore that there are real issues of racism and inequality within Israel, which have been on ugly display in recent weeks, that Israelis need to address.

At the end of the day, when all is said and done, this is a painful and enduring conflict between two indigenous peoples struggling to share one homeland. They do not map onto American and Western narratives of racism, colonialism and whiteness.

Regardless of our politics, we must agree that these two peoples desperately need to achieve a peaceful coexistence. For those who care about human dignity, about peace, and about truth, there is a role for us to play in supporting those who actually live here and are working to build a better future for both people.

The Israeli-Palestinian conflict is not, however, a stage for playing out an American problem with an American discourse. These people deserve better than to be penned in by our narrow approaches to the problems of our world. We, and our politicians, need to do better.