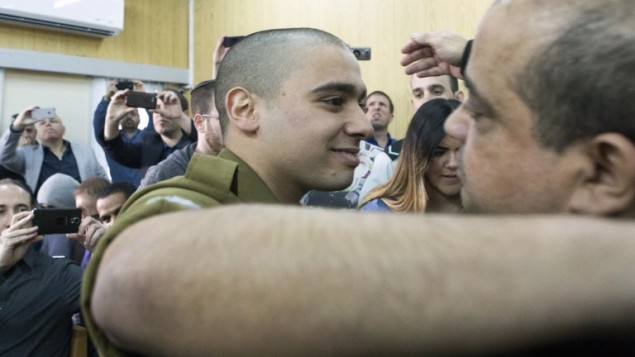 There are strong reasons to view the sentencing of Elor Azaria, the soldier convicted of killing an unarmed Palestinian in Hebron almost a year ago, as an epic failure for Israeli democracy (or if not, at least – yet again – for its international image).

In spite of that, I believe the fact that the soldier was ultimately convicted of manslaughter – and that the army managed to withstand the relentless pressure of a powerful public mob trying to sway the outcome of the trial – is a positive testament to Israel’s relative and growing maturity as a state. This is particularly true given the fact that , in international terms, it is still in its infancy.

At the least, the trial will be remembered in Israel for decades to come as one of the country’s first, serious moments of self-reflection.

For Israelis, the trial represented a brutal trashing out of the historically fraught dynamic of prosecuting the epitome of ‘one of our own‘ in the corridors of the country’s highest martial court.

Considering the additional loaded context of the ‘victim’ of this self-prosecution being a sergeant in the army  – the paternalistic institution that, to an extent, commands unquestionable adulation from the general public, and to which the country owes its very survival – and the civil war atmosphere that erupted during the trial seems almost inevitable.

The trial of Azaria

A quick recap for those unfamiliar with the incident that brought Elor Azaria to public attention.

Azaria was captured on amateur video shooting Abed al-Fattah al-Shari, a Palestinian resident of the city, eleven minutes after he had been non-fatally shot by other soldiers responding to a stabbing attack that he had perpetrated.

For this criminal act (which, for many, seems to toe a very thin line between manslaughter, extra-judicial military execution, and outright murder) Azaria was this week sentenced to 18 months in prison – which is often, incidentally, the same jail time handed down to Palestinians caught throwing rocks at Israelis.

Besides, for many observers, the punishment transparently not fitting the gravity of the crime, there are other aspects of the trial and its ongoing aftermath that don’t cast Israel in a particularly positive light and conjured the feeling of a ‘show trial’ followed by a slap on the wrist punishment in the minds of many.

To name a few:

Why, after his conviction, was Azaria allowed to remain in the army at all (part of the military court’s sentencing was demoting Azaria’s rank from Sergeant to Private)?

In stark contrast to the atmosphere when Palestinians face Israeli military tribunals, why did the gallery, in which a gloating Azaria was allowed to sit surrounded by the cheering presence of his family and supporters during both sentencing and hearing, better resemble the partisan atmosphere of a football stand than a courtroom?

And on what grounds are Israel’s prime minister, and many right-wing members of parliament, now calling for the convicted soldier’s pardon?

The trial of maturity

Despite the shocking nature and conclusion of Azaria’s trial for many, I believe that the legal battle waged between the army prosecutor and he and his supporters has proven to be a landmark trial of another variety for Israeli society.

Its outcome, although far from fair or desirable, represents proof of Israel’s growing maturity as a young nation navigating the complicated dynamics of self-responsibility and extends the concept that nobody in society – even that quintessential patriot, the serving conscript – is beyond the reach of the law to new reaches.

An interesting facet of the Azaria trial is that it is far from the first time in the country’s 69 year history that a member of its army has gone on trial for murder or manslaughter.

The divisiveness it engendered among his “supporters” and those, on the other hand, calling for him to be allowed stand trial, however, was entirely unprecedented in its vigor and viciousness.

Besides ending in the conviction of a soldier for manslaughter, the trial also baldly exposed a diametric rift within Israeli society.

On the one hand, legions have emerged (disconcertingly including the prime minister) of those who are prepared to allow their sense of empathy with their fellow citizen – especially those defending the country – to overcome any measure of justice, logic, or ethical concern they may have of the fact that an appropriate form of punishment is necessary to deter humans from unnecessarily killing one another, whatever the context that happens within.

In their worldview, Israel’s battle with the Palestinians is a zero sum moral race to the bottom in which Israel and its army needn’t hold itself to any higher standard than that of a terrorist lunging at an enemy target with a kitchen knife.

For them, the concept of a soldier being forced to stand trial is mutinous, no matter how egregiously that soldier violates the country’s own military law. If through some miscarriage of justice that soldier is somehow convicted of a military crime, an executive pardon must, on principle, be tendered irrespective of any objective reasoning to justify its granting.

On the other, the army, beginning with Azaria’s commander, Tom Na’aman (who confronted the soldier almost immediately after the incident) adopted a swift and resolute stance since the beginning of the case that Azaria must stand trial for his actions just as a civilian would under comparable circumstances.

In defending the trial’s continuance, the political establishment has also resisted enormous public pressure – including planned concert rallies from celebrity singers and a mass protest on Tel Aviv’s Rabin Square – to avoid forcing its outcome to be dictated by sheer populism.

Chief of Staff Gadi Eisenkot and Defense Minister Avigdor Lieberman urged restraint from the young soldier’s vocal supporters and helped cement the message that Israel is a country ruled by law and not by the sentiment of a lynch mob.

The court’s judgment may have been handed down, but the test of Israel’s maturity goes on.

Even after Azaria’s conviction (which, the soldier’s family have said he will probably not appeal), calls from ministers continue to mount for Azaria’s pardon.

Some have cited security concerns, arguing that the precedent could create reluctance on the part of soldiers to engage with enemy combatants; others have framed the need to pardon Azaria in purely emotive reasoning. Given Netanyahu’s avowed support for the measure, there is a real chance that Israel’s President may accede to the request.

Pardoning Azaria after his questionably lenient sentence would almost certainly unravel whatever progress Israel has made as a nation in traversing the public debates that have shaped around his emotionally fraught trial.

It would also cement another message to the world that Israel’s judiciary is nothing better than a series of kangaroo courts prepared to whitewash the actions of its citizens or military when it suits them to do so.

Such a verdict in the trial of Israel’s handling of the Azaria issue would be a disappointing conclusion.