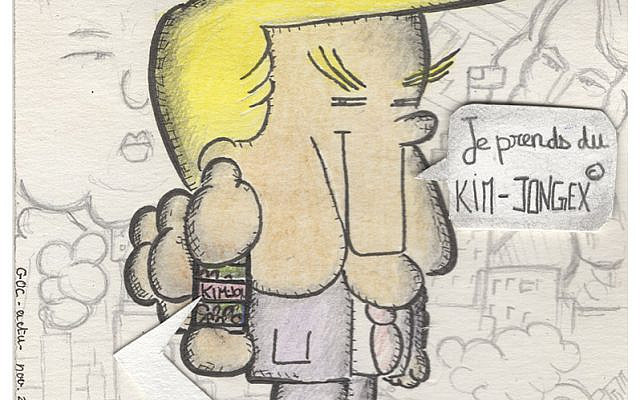 For a long time, together with many of my friends and members of my family, I have been wondering how any morally sensitive Jew could have support Donald Trump for president of the United States of America. And now, in light of his clear and vocal incitement to insurrection and sedition leading up to the mob attack on the Capitol in Washington DC on January 6th and on that very day, this question has come into sharper focus and I do not understand how any ethically conscious Jew in America or Israel could support this dangerous, delusional and destructive man.

One of my rabbinic colleagues and friends, Rabbi Jeff Salkin, of West Palm Beach, Florida, raised similar questions in his piercing and poignant post for Religion News Service a few days ago. He reflected about Trump’s support of the alt-right Proud Boys and other anti-Semitic groups. He wondered about whether Jewish Trumpies cared more about Trump’s moving the American Embassy to Jerusalem than they cared about the attack on the Capital in Washington. He asked whether Jews who voted for and support Trump and saw his latest attacks on American democracy and his persistent lies thought at all about what happened in Germany in the 1930’s even once. And finally, he raised the all important question of silence and complicity:

Did you ask yourself: Is this what my support of this man has finally wrought? All this time — for the past four years and beyond: Did you say nothing? Did you ever read that little slice of Talmudic teaching: Silence implies consent?  If, all this time, you were silent, did you really mean for your silence to be consent?

First of all, I would like to say, as a Jew who lives in Israel (and is also still a citizen of the USA), that Trump’s policies have not been helpful to Israel, contrary to popular opinion. They may have been helpful to PM Netanyahu and his right-wing government, but they have not been helpful to the people of Israel. On the contrary, his support of right-wing extremism in Israel—like his support of extremism in America– has been destructive and deleterious. His policies, including the move of the Embassy to Jerusalem, completely buried the peace process with the Palestinians and supported creeping annexation of the West Bank and the denial of all Palestinian human rights.

Similarly, with the help of the now deceased Sheldon Adelson, he supported fake news in Israel through the free distribution of a right-wing tabloid newspaper, Yisrael Hayom, which fanned the flames of hatred and incitement against Palestinians in the territories as well as Palestinian Arabs within Israel. Moreover, he helped to promote what is now called Bibi-ism, which is the Israeli mutation of Trumpism, a movement that attacks our democracy in Israel constantly by defaming our judicial system as well as the press and the center-left political parties and their voters, through constant political spin and vicious attacks in the press and on social media.

Secondly, it is now completely clear for the whole world to see, that #45 has been very bad for America. Not only has he not made America great again, he has made it much worse! He has turned America into a very dangerous and anti-democratic play, a country where armed fascistic mobs are set to attack federal institutions in all 50 states next week, according to reports by the FBI.

On top of all this, he has acted immorally throughout his time as president (and before this) in manifold ways, the most egregious of which has been what Tom Friedman of the New York Times has called “The Big Lie”, i.e., the falsehood that this election was rigged and that it was stolen from him. He has repeated this lie thousands of times during the last few months, such that millions of deceived Americans—many of them very violent—have come to actually believe this nonsense (although fortunately the courts did not accept it). His insanity and incitement to rebellion reached its culmination in his speeches to the mob on the morning of January 6th in Washington DC.

Thirdly, following Rabbi Salkin, I wonder whether Jewish Trumpies (about 30% of American Jews and a shocking 70% of Israeli Jews!) have now asked themselves, is this what my support of this man has finally wrought?  Throughout the terrible mishandling of the coronavirus pandemic during the past year, under the administration of the evil, criminal and unhinged non-leadership of #45, every American and every American Jew should have been shocked to their depths of their souls at the lack of action and the total lack of understanding or compassion for the preventable deaths due to the lack of leadership. This should have been enough. But it wasn’t. It took the insurrection of January 6th to wake everyone up!

Or did it? Are there still human beings, with a moral compass, in America or in Israel, who could support this delusional and dangerous man? Are there still Jews who can rationalize their support for a man who has proven his fascist tendencies over and over again, and did so again yesterday in Texas. It is inconceivable to me that any Jew who has any understanding of Jewish ethics could still support such a person. I just don’t get it.

The current disgraced and disgruntled president of the United States has proven by his words and deeds during the last 4 years and certainly during the last year, and even more definitively during the last week, that he is a deeply unethical and anti-democratic human being, not to mention insane and detached from reality, as many of his former advisers have told us in the media. No morally concerned American, and certainly no ethically attuned Jewish human being, should be able to support such a man for president or any other elective office now or in the future.

In the Talmudic tractate known as Ethics of the Fathers, we learn that Rabbi Hanina taught us: Pray for the welfare of the government. In our synagogues every Shabbat, we pray for the welfare of the government, whether we are in Israel or in America. But prayer is not enough. Now is the time for ethical action. It is the time to root out the possibility that such a person as #45 could ever be elected as president (or anything else) in the USA.