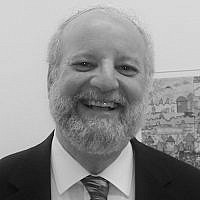 The Blogs
Jeremiah Unterman
Apply for a Blog
Please note that the posts on The Blogs are contributed by third parties. The opinions, facts and any media content in them are presented solely by the authors, and neither The Times of Israel nor its partners assume any responsibility for them. Please contact us in case of abuse. In case of abuse,
Report this post.

The Times of Israel recently published an interview with Luxembourg’s Foreign Minister Jean Asselborn in which he is quoted as saying that Israel’s contemplated application of sovereignty rights to parts of the West Bank is “an annexation [that] violates the seventh of the Ten Commandments: Thou shalt not steal. An annexation of parts of the West Bank would be just that: stealing.” Whether a person is for or against annexation, this statement is outrageous, especially considering the source.

How dare you, Mr. Asselborn! You, your people, your banks, your government have stolen everything from your Jewish citizens that you could get your hands on! With the exception of 36 survivors, the entire Jewish population of approximately 4,000 souls was murdered in the Holocaust. All their real property, possessions, and bank accounts have been STOLEN by the people, banks, and government of Luxembourg. And less you think that Luxembourg may be too poor to pay compensation to Jews, know that its GDP is an astounding $114,000 per capita – by far the wealthiest country per capita in Europe! In fact, Luxembourg has passed a law which restricts eligibility for compensation to the vast majority of Jews who lived there before the Holocaust. The Times of Israel even published an article on April 22, 2019, about Luxembourg’s continual theft of Jewish property. It’s extremely sad that Raphael Ahren, the interviewer of Mr. Asselborn in the TOI, did not challenge Mr. Asselborn on his country’s immoral behavior.

One of the terrible ironies of Mr. Asselborn’s statement is that it was the religious civilization of Luxembourg’s victims – Judaism – which promulgated to the world the very ethics that he and his country has violated for over 70 years.

When you, Mr. Asselborn, are one of the most important leaders of a gang of thieves which comprise an entire country, how dare you accuse the only country in the world that represents your victims of contemplating theft! For shame! Either make restitution, or crawl back into the hole from which you came!

About the Author
Jeremiah Unterman is the Academic Editor of the new series, the Koren Tanakh of the Land of Israel, and a Resident Scholar at the Herzl Institute. He has been a Professor of Bible at Yeshiva University and elsewhere and is the author of Justice for All: How the Jewish Bible Revolutionized Ethics, published in 2017 by the Jewish Publication Society.
Related Topics
Related Posts
Comments