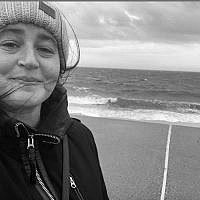 The Blogs
Naomi Matlow
Apply for a Blog
Please note that the posts on The Blogs are contributed by third parties. The opinions, facts and any media content in them are presented solely by the authors, and neither The Times of Israel nor its partners assume any responsibility for them. Please contact us in case of abuse. In case of abuse,
Report this post.

The concept of “bearing witness” to suffering is all too familiar to the Jewish community, especially during times of Holocaust remembrance and more specifically, Yom HaShoah. I am currently a graduate student of Mindfulness Studies at Lesley University and my deep dive into Buddhist philosophy over the last year has helped illuminate the concept of what it means to bear witness to suffering and how it is a necessary step to healing the world.

In his book entitled Bearing Witness, Zen teacher and author Bernie Glassman writes, “Out of the process of bearing witness the right action of making peace, of healing, arises.” It was the inclination to bear witness to the suffering of the over one million murdered at Auschwitz-Birkenau that lead Glassman to lead a pilgrimage for diverse religious figures and peacemakers to this corner of horror in 1996, which he discusses in this book. His intention, which was then shared among the group of 150 peacemakers, was to “be face-to-face with both the horror — and the healing — of Auschwitz.” “How could there be healing at Auschwitz?”, I asked myself. Then I read on.

During the two-mile walk from the “living” labor quarters of Auschwitz to the death camp of Birkenau, the group chanted the names of the murdered victims in a walking meditation. I was privileged to walk this same path, this same path that over one million innocent victims of the Nazis, the majority Jewish, walked to their deaths, in the spring of 2015 on the Young Adult March of the Living. I was also on a pilgrimage of sorts, not with Zen practitioners but with fellow Jews, mostly young adults. We too came to bear witness to the lost histories of our shared ancestors. No one could escape the eeriness of the fact that had we been born a short 50 years earlier, we would not have been so lucky to walk out of those gates.

Glassman was encouraged by his old friend, Rabbi Zalman Schachter-Shalomi, to keep his, and the intention of the group, in mind throughout their experience. Reflecting back on my own experience at Auschwitz-Birkenau, it was very easy to let anger, sadness, confusion, and shock cloud my intentions for being there. Glassman writes:

It is difficult to understand the unthinkable, but bearing witness to the suffering of others happens before conscious understanding. It is opening a window to awakening without fully knowing why. I did not think of my own experience at Auschwitz as an opportunity to help bring those innocent, suffering souls to rest. I wish I had. I felt compelled to walk that hallowed ground so I could more deeply embody the torch I was carrying as a Jewish person. A Jewish person who by some twist of fate was born in Canada in 1989 and whose ancestors headed west from Poland, Belarus, and Russia in the 1920s and 30s knowing their future as Jews there was bleak, but to their horror became so much bleaker than anyone could have envisioned. Had they stayed, I would not be here. Those lost souls are intertwined with my own, not only because I am Jewish but because I am human. I hope my retreat there helped bring their souls to rest and brought healing to them, like Glassman’s retreat did. I had only previously thought of what my experience at Auschwitz-Birkenau had taught and instilled within me, not what my presence could have done for the victims. Now I know and believe that bearing witness is a two-way exchange of awakening and healing, even for the no longer living.

About the Author
Naomi Matlow is a freelance writer and mindfulness student based in Toronto, Canada. Most recently, she was the associate content editor at Unsettled, the global community for those who embrace the unknown and value meaningful human connection. She is currently a graduate student at Lesley University in Cambridge, MA in Mindfulness Studies, and is very passionate about helping young people bring more ease and compassion into their lives through mindfulness education.
Related Topics
Related Posts
Comments