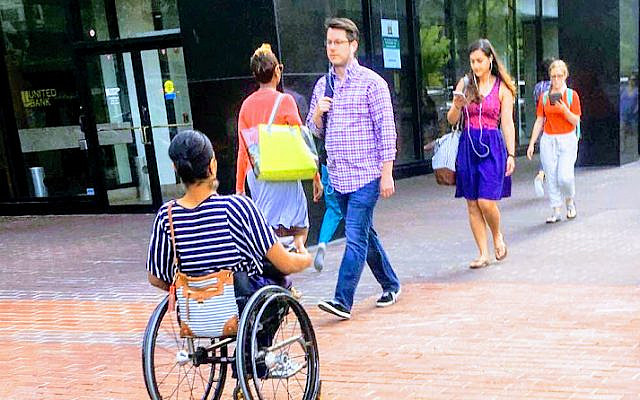 There are so many ways that people find their way back to Hashem. Today, I met one man with a tragic yet fascinating story about he returned to Yiddishkeit. From him, I learned that G-d is found not just on Mount Sinai in the fire, cloud, and sound of the shofar at the giving of Torah, but also through one’s interactions in everyday life.

At Chabad today celebrating Shavuot, there was a nice man in a wheelchair, and unfortunately, he was missing a leg. During services, we exchanged pleasantries. Afterwards, at Kiddush, I tried to help him by making him a dairy plate of goodies (bagels, lox, smear, etc.).  Then we sat down with him to schmooze a little.

At one point, he told me him also grew up in the Bronx like me. I recognized the street even after all these years.  After a while, I felt comfortable asking him about his story, and how he had come to lose his leg. This is the story he told me:

He was raised in a reform household. He had his bar mitzvah, was called to the Torah, said the blessing, and then “that was it” for many decades in terms of his association with Judaism. For many years, he said, “I was a non-believer in G-d.” Then one day his whole life changed.

He has an anxiety condition, and suffers panic attacks. One day, he was on the road, and started to experience some symptoms for which he is prescribed Xanax. He took a pill, but then instead of pulling over, he continued driving. Regretfully, he ended up in a collision with another car. He said, “Five days later, I awoke in the hospital, and they told me what happened.” His body had been crushed in the accident and he lost his leg. Moreover, the driver of the other vehicle was killed!

This disabled man was then charged with DUI and spent the next 8 1/2 years in prison. But the Rabbi of the prison helped him to find G-d in all this suffering and slowly he returned to his Jewish roots. Now, for the Jewish holiday of Shavuot, commemorating the giving of the Torah to all the Jewish people, he was in synagogue, holding his prayer book and listening to the receiving of the Ten Commandments with the rest of the congregants.

All I could really do was say how sorry I was for what happened to him and all his suffering. He said to me, “Don’t be sorry. I know now that it was all for a reason—all for the good!” And again, he explained that from these tragic events, for which he told me that he takes responsibility, he was able to find his way back to Hashem. Sometimes, as he said, we need a slap to reorient us to what’s real and important in life. And now he is a believer in G-d again. And he mentioned gratefully, the Rabbi from prison who helped him see the bigger picture of what happened and perhaps why it all did.

Life is definitely not always easy, and there is plenty of challenges and even G-d forbid tragedy that people must deal with, but if we can see through the pain, suffering, and even loss, then perhaps,we can come out on the other side and find some meaning and some good that can come from it. This is certainly easier said then done, but if this man who’s body was crushed, leg lost, and who spent so many years in prison could find the good and his way back to Hashem, then there is hope for all of us who can learn, grow, and turn our lives around as well. G-d is there in the darkness and in the light, and we have to find Him and believe.