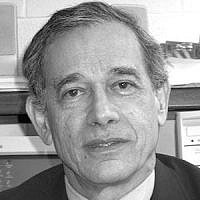 The Blogs
Alvin H. Rosenfeld
Apply for a Blog
Advertisement
Please note that the posts on The Blogs are contributed by third parties. The opinions, facts and any media content in them are presented solely by the authors, and neither The Times of Israel nor its partners assume any responsibility for them. Please contact us in case of abuse. In case of abuse,
Report this post.

The books we are moved to read and, even more, the books we feel compelled to write tell lots about who we are and what matters most to us.

In my case, what first drew me was wordless — a childhood fascination with some family photographs — and only later took on verbal form. Pictured in these photos were relatives of my mother whom I never knew and never would know. They remained behind in the small towns of Podolia where my parents were born and from which they later left for a new and better life in America. The handsome people pictured in these photos were not so fortunate: their letters from Russia stopped coming with the onset of World War II, and they were never heard from again.

As a boy, I knew nothing about their fate in Europe. Their intelligent faces and dignified bearing beguiled me, and I wanted to learn as much as I could about them. Most of all, I wanted to know when we might see them in America, but whenever I asked my parents that question, I never received an answer. Whatever was hidden behind that mysterious silence puzzled me and introduced a heaviness into my young life that has remained to this day. In ways I could not have foreseen, the indecipherable presence-and-absence of these Russian relatives was to shape my reading and writing for decades to come.

My first love was poetry. And so, not surprisingly, my first published book, done while still in graduate school, focused on a poet: an edited collection of original essays I commissioned on the British visionary poet William Blake. That work was followed by a Ph.D dissertation on two major American poets–Ralph Waldo Emerson and Walt Whitman — and then by a volume collecting and introducing the published and unpublished poetry of the American writer John Wheelwright. But during the same time that I was teaching and writing about modern poetry, I chanced upon two books that were to significantly redirect the focus of my intellectual interests and scholarly life.

Both books appeared in French and were published in English translation in 1960 and 1961. The first, a slim memoir by a writer I had not heard of before — Elie Wiesel — was called Night. The second, by André Schwarz-Bart, an author whose name was also new to me, was a novel called The Last of the Just. A graduate student at the time, I had begun to do some independent research on the catastrophe visited upon European Jewry during the Nazi period, but nothing I had previously encountered spoke to me the way these two books did. The experiences of personal suffering and communal devastation they recounted were shattering. Primo Levi, himself an Auschwitz survivor, described the impact of this massive human destruction in a single memorable phrase: he called it, succinctly and unforgettably, “the demolition of a man.” Reflecting philosophically on the broadest ramifications of this intense human levelling, Elie Wiesel concluded, mournfully, that “at Auschwitz not only man died but also the idea of man.” Events of this magnitude are rare, but if Wiesel was right, the iniquity revealed in the Nazi camps was so enormous — Levi called it the “greatest crime in the history of humanity” — as to require a radical rethinking of human definition itself.

A foundational shift of such dimensions is not easily grasped, and it is doubtful that I saw anything like the full range of its consequences in my first encounter with these books. All I knew was that they seized me by the throat with almost every page I read. That grip has not loosened to this day. In ways I never consciously sought and could not have imagined, my early connection to this literature revealed to me, then and there, the work I was meant to do as a scholar, teacher, and writer.

In those years—now more than half a century ago, few scholars looked upon books like Wiesel’s and Schwarz-Bart’s as signaling the emergence of an important and coherent literary corpus, today widely known as Holocaust literature. There were at the time virtually no courses on this literature at American or European universities and little scholarly or critical work that engaged it in a systematic and comprehensive way. When, in the early 1970s, I sought to introduce such a course at my own university, my proposal was initially met with skepticism by some of my faculty colleagues. The course’s raison d’être was somehow considered suspect; and some argued it just didn’t “belong” in a literature department. Once this resistance was overcome and the course instituted, however, it drew lots of student interest, and I have taught it just about every year ever since.

I also began to write seriously about Holocaust literature. In 1978, together with Irving Greenberg, I published one of the first books on Elie Wiesel, Confronting the Holocaust: The Impact of Elie Wiesel (Indiana University Press, 1978). Two years later, I brought out A Double Dying: Reflections on Holocaust Literature (IUP, 1980), one of the earliest scholarly attempts to clarify the thematic and formal characteristics of this growing body of writings. Other books and articles have followed, including Imagining Hitler (IUP, 1985), Thinking about the Holocaust after Half-a Century (IUP, 1997), and The End of the Holocaust (IUP, 2011).

Much of this work seeks to illuminate literature’s role in the shaping of Holocaust memory, as well as to explain a growing resistance to such memory within certain areas of academic and popular culture. Towards the end of their careers, some of our most important writers, among them, Primo Levi, Elie Wiesel, Jean Améry, and Imre Kertész, have registered a strong sense of despondency and futility regarding readers’ interest in the wrenching experiences they have recounted in their writings.

As they saw it, Holocaust memory, whose vitality and longevity they hoped to consolidate through their life’s work, was rapidly attenuating. They have also decried the many ways in which such memory has been variously misused for ends that have little if anything to do with the history of the Nazi crimes against the Jews. The End of the Holocaust gives voice to their concerns and argues that they need to be taken seriously, especially in a post-Holocaust age that is witnessing the widespread return of antisemitism, one of the major causes of the disaster to which they bore witness. As Imre Kertész disturbingly puts it: “The anti-Semite of our age no longer loathes Jews; he wants Auschwitz.”

If there is even a remote chance that Kertész’s understanding of the after-life of Auschwitz is correct, then one of the obligations of Holocaust scholars is surely to help others come to know what he and so many writers like him went through. Feeling such an obligation myself, I long ago left the study of Romantic poetry to others and have focused the major part of my scholarly work over the past five decades to expanding and disseminating knowledge of Holocaust literature and, more recently, of contemporary antisemitism. My last book, Resurgent Antisemitism: Global Perspectives (2014), an edited volume of original essays, addresses these concerns. My next book, Deciphering the New Antisemitism, forthcoming in the fall, does so as well.

As my early discovery of Wiesel and Schwarz-Bart convinced me, and as my subsequent readings in the works of countless other Holocaust authors have confirmed, we owe a debt to the dead, the least of which is that they not be forgotten. We also owe a debt to the living — at the very least, to alert them to those who look at Auschwitz today as inspiration rather than admonition. Such a view of the Nazi genocide, regarding it as a model to be emulated and not a warning to be heeded, is infinitely gloomy, but, for some, it seems to hold true, as Primo Levi foresaw in the conclusion of his last book: “Many signs lead us to think of a genealogy of today’s violence that branches out precisely from the violence that was dominant in Hitler’s Germany,” he wrote. And then, distilling all he had learned over 40 years of reflection on Auschwitz: “It happened, therefore it can happen again: this is the core of what we have to say.”

To pass on Levi’s hard-won wisdom, and the wisdom of Wiesel, Kertész, Améry, and many others like them, is to serve as a witness for the witnesses, not a career I ever consciously chose to follow but one that evidently chose me. I plan to keep at it for as long as I can.

About the Author
Alvin H. Rosenfeld is a Professor of English and Jewish Studies at Indiana University.
Related Topics
Related Posts
Comments