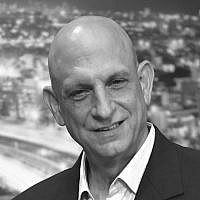 The Blogs
Aharon Aharon
Apply for a Blog
Please note that the posts on The Blogs are contributed by third parties. The opinions, facts and any media content in them are presented solely by the authors, and neither The Times of Israel nor its partners assume any responsibility for them. Please contact us in case of abuse. In case of abuse,
Report this post.

Renowned worldwide for its technological prowess in fields like cybersecurity, artificial intelligence, IT, and smart mobility, Israel is also continuing to gain recognition for its invaluable contributions to the worlds of biotechnology and the life sciences – technologies which help improve healthcare and quality of life for millions worldwide.

Israeli life science companies raised nearly $7 billion on NASDAQ over the past decade. In the past five years alone, there were more than $4 billion worth of acquisitions of Israeli companies in the field. Seeking to capitalize on local expertise, innovation and knowhow, multinational giants including Pfizer, Takeda, Merck, Amgen, Philips, GE, Boston Scientific, and Johnson & Johnson have flocked to Israel to establish corporate R&D centers as well as startup incubators.

What lies at the heart of this success story?

Israel’s leadership in the life sciences is underpinned by academic excellence, robust R&D programs and premier medical centers. Prestigious academic institutions including the Weizmann Institute of Science, Hebrew University of Jerusalem, Technion-Israel Institute of Technology, Tel Aviv University and the Ben Gurion University of the Negev, have been at the forefront of biotech R&D for decades.

At 4.3 percent of GDP, Israel’s civilian R&D expenditures are the largest in the OECD.

Multidisciplinary collaboration, one of Israel’s strengths, is also a key to the country’s success in this burgeoning field. Leveraging the strengths of the Start-Up Nation’s world-class Information and Communications Technology (ICT) sector, Israel has seamlessly integrated its life sciences into its innovation ecosystem to develop a state-of-the-art digital healthcare infrastructure and make medicine more efficient, personalized, and effective.

Ninety eight percent of Israel’s population has detailed electronic medical records, helping Israel stay on the leading edge of the digital transformation of healthcare. It’s no coincidence, then, that Israel’s healthcare system consistently ranks among the best in the world. Not only is Israel’s digital-forward approach a boon to patient care and outcomes, it is also accelerating the development of some of the most promising biotech innovations.

In March, the government approved a $275 Million plan to create a national digital health program with an eye towards delivering more personalized and preventive care. The initiative helps position Israel for global leadership in data-driven healthcare– a field that’s slated to grow significantly as artificial intelligence and machine learning technologies are increasingly deployed in medicine.

The thousands of attendees representing some 70+ countries at the BIO International Convention in Boston from June 4-7 will have the opportunity to be exposed to Israel’s unique biotech hub and to see firsthand how some of Israel’s most innovative biotech and life sciences companies are putting Israeli ingenuity to work to tackle medicine’s greatest challenges and deliver lifesaving treatments. The 9 companies in the Israeli delegation at the convention represent a cross-section of organizations whose work has helped vault Israel to the front of the pack in leading the biotech and life sciences sector.

Working at the cutting edge of cancer research and treatment, Nucleix utilizes bioinformatics and biochemical tools to develop noninvasive diagnostic tests, while publicly-traded VBL Therapeutics is focused on the discovery and development of products to attack cancer, through gene therapy, targeting an anti-inflammatory platform.

No less promising are the Israeli neuroscience companies attending the Bio Conference. Hailed as a technology pioneer by the World Economic Forum, ElMindA applies data analytics and machine learning to discover patterns in brain activity. Its solution carries promise as a diagnostic and monitoring tool for diseases like Alzheimer’s. Mitoconix develops disease-modifying therapeutics for neurodegenerative diseases including Alzheimer’s, Huntington’s, and Parkinson’s. The treatments have shown efficacy in animal models, and the company aims to initiate a human study soon.

While Israel has been developing its biotech sector for decades, the Innovation Nation is just getting started. Boasting a culture of technological ingenuity and a strong public-sector commitment to continued investment and incentives for innovation, Israel is poised to only strengthen its biotech leadership in the coming years. This includes initiatives from my organization, the Israel Innovation Authority, whose commitment to the life sciences industry includes several new programs such as the Track 35 initiative, which is incentivizing major pharmaceutical companies to establish R&D centers in Israel. Venture capitalists, industry thought leaders and multinational corporations are taking notice – but the real beneficiaries will be the millions of people whose lives are changed by Israel’s life sciences revolution that enables the development of next generation treatments.

About the Author
Aharon Aharon is the CEO of the Israel Innovation Authority, an independent public entity that operates for the benefit of the Israeli innovation ecosystem and Israeli economy as a whole. Its role is to nurture and develop Israeli innovation resources, while creating and strengthening the infrastructure and framework needed to support the entire knowledge industry. Prior to his role at the Authority, Aharon served as the VP of Hardware Technologies and General Manager of Apple Israel. His previous roles were Co-founder, CEO, and chairman of Camero, a startup developing through-the-wall micro-power radars, active Chairman of the Board at Discretix, a startup providing solutions for data security, CEO of Seabridge, a wholly owned subsidiary of Siemens and COO of Zoran. Prior to that, he held a number of senior management positions at the IBM Research Division. Aharon holds a B.Sc and M.Sc in Computer Engineering and Electrical Engineering respectively from the Technion, where he lectured for more than 15 years.
Related Topics
Related Posts
Comments