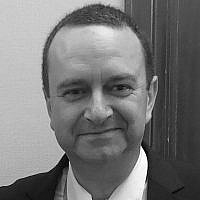 The Blogs
Mordechai Duvdevani
Apply for a Blog
Please note that the posts on The Blogs are contributed by third parties. The opinions, facts and any media content in them are presented solely by the authors, and neither The Times of Israel nor its partners assume any responsibility for them. Please contact us in case of abuse. In case of abuse,
Report this post.

Israel’s scientific community is making one of its latest breakthroughs in a field of medicine that rarely receives public attention: urology.

This technology pushes the boundaries for urology care in terms of procedure outcomes, efficiency, and economics.

What exactly is behind the development of this technology, and how does it work?

Urolithiasis (kidney stones disease) is a very common disease with high occurrence and recurrence rates — about 1 in 10 people suffers from kidney stones, with men in their 30s to 50s facing three times the risk of women the same age. The history of urolithiasis treatment dates back to the dawn of civilization; cutting for stones in the bladder is one of the oldest elective surgical procedures ever recorded.

Until the beginning of the 1980s, stones in the urinary system were treated mainly by open surgical procedures. These surgeries were performed for kidney, ureteral, and bladder stones. But most of the groundbreaking advancements in this field occurred in the middle of the 1970s through the end of 1980s, including the invention of endourology, while percutaneous nephrolithotomy (PCNL), ureteroscopy (URS), and extracorporeal shockwave lithotripsy (ESWL) replaced open surgeries in stone treatments.

The achievements during the following decades were also impressive, constituting mainly of improvements in intracorporeal lithotripters and the arrival of holmium laser technology. After the dawn of the new millennium, leaders in the field recognized a fast decline in the use of ESWL, an increase in URS, and stabilization in performing PCNL procedures. But it seemed that the technology had essentially reached its full potential.

However, more recently, the evolution of high-power laser machines proved to be a game-changer that ignited additional advancements in endourology. Initially released in 2017, the MOSES platform is a pulse-delivery technology that improves energy transmission, resulting in more efficient lithotripsy treatments compared to the regular laser pulse.

With MOSES technology, the laser pulse is modulated into two consecutive parts. The first part separates the water by creating a small vapor bubble, and then the remaining energy is transmitted through the vapor bubble towards the target. This optimized energy delivery allows surgeons to have much more control, and the procedure is faster and more effective at eliminating stones. Furthermore, stone fragments are less likely to scatter during treatment, thereby reducing the risk of fragments moving into distant areas of the kidney.

Today, with Israel garnering international headlines as the global leader in vaccinating its population against COVID-19, MOSES 2.0 has also played a role in Israel’s fight against the virus.

MOSES 2.0 leads to 20 percent shorter procedure times for urology treatment, at times resulting in same-day discharge from the hospital. As intensive care unit (ICU) capacity was overloaded much of the past year due to COVID-19 cases, same-day discharge for urology procedures served to ease hospitals’ overload during the pandemic by freeing up inpatient beds for emergency patients. MOSES 2.0 provides much faster and more efficient operations, with minimally invasive surgery and no catheter required. While MOSES 2.0 patients can be discharged from the hospital on the same day, a short stay is required for other forms of urology treatments. Amid an unprecedented public health crisis such as COVID-19, this laser technology has had an influence on keeping beds at Hadassah Ein-Kerem Hospital available to those who critically need them. On an annual basis, Hadassah treats approximately 1,000 patients suffering from urolithiasis.

Moving forward, MOSES technology promises to continue improving the effectiveness and efficiency of urology care in Israel and worldwide.

About the Author
Prof. Mordechai Duvdevani is Director of Endourology and Lithotripsy at Hadassah Ein-Kerem Hospital and Secretary-General of the Israeli Urological Association.
Related Topics
Related Posts
Comments
Advertisement