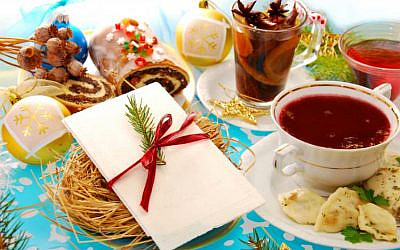 Believe it or not, Passover seder and Polish Christmas Eve dinner (known as Wigilia) have a lot in common. Unleavened bread, horseradish, storytelling, singing, just to name a few. Something that I’ll always prepare if I attend a Wigilia for example is home-made pickled herring because nothing tastes more like Polish Christmas to me than some cold herring pickled in olive oil and I will take the teasing for it from my friends who aren’t familiar with the tradition. There’s also a set order of how the dinner progresses and each dish holds symbolic meaning. Let’s play a little game: I’ll list out the series of events and let’s see how many parallels you can find between Wigilia and a Shabbat dinner or seder.

First, in order to start the meal, the youngest person in the household needs to spot at least one star (my father said that you needed to see three stars, but I think that’s the Jewish version of this tradition taken from calculating the end of Shabbat, fast days, and holidays). Once the child notifies the rest of the group that the star had been spotted, all lights, music, and electronics are turned off throughout the house. Don’t even think about trying to sneak your phone on you because one of the Polish grandmas will publicly shame you for disrespecting Wigilia. Then, the “owner of the house” lights the white candle at the center of the table and under candle light reads the New Testament Christmas story as everyone else stands at attention. One of the only times you are encouraged to keep your shoes on, rather than taking them off immediately after entering a Polish home, is for Wigilia…lucky me in my heels. Anyway, after the reading, the unleavened bread is passed out and everyone goes around to each person giving them a blessing for the upcoming year. As seen on a bunch of different Polish meme pages around Christmas, this tradition can be hard sometimes if you don’t know the person or worse if you’re not their biggest fan. Either way you still have to give them a positive blessing.

When you finish wishing them a good year, no matter how easy or difficult it was, you break off a piece of the unleavened bread they’re holding and eat it. Then, they will do the same: give you a blessing and then break off a piece of the unleavened bread in your hand. Once everyone finishes giving each other their blessings, you sit down at the table to start with some red beet soup, otherwise known as barszcz or borscht. Then, the cold dishes make an appearance, don’t make the mistake of thinking that you’ll have some warm pierogi to help you stomach some of the fish since warm and cold courses are kept separate. You’ll be kindly reminded that you have to try every single dish at the table to have good luck for the upcoming year. If you ask me, I think it’s a way to make sure that the people who prepared the food don’t feel offended, especially since gefilte fish is on the table whether you genuinely like it or not. It’s honestly funny to me that in Polish gefilte fish is known as “Jewish-style carp” and in Israel people refer to it as “Polish-style fish” because no one wants to claim its…I’ll be nice, uniqueness. After the conclusion of the meal, it’s time to sing some classic Polish carols known as kolędy. Unfortunately, Jingle Bell Rock won’t make an appearance, but a song about how baby Jesus is crying in the cold will!

Growing up, my father would tell me every year that Christmas Eve was one of the only nights when Jews and Poles could share a meal together. Why might you ask? Becaaaaauuuuse, as he would say, it’s kosher! From the red beet soup to the cod, you can also find these dishes in a stereotypical Ashkenazi Jewish cookbook. Also, no meat can be served or eaten on the day of Christmas Eve, (I looked forward to my lox and bagel lunch every year as a child) so you don’t have to worry about whether the meat was slaughtered according to kosher laws. My father would also tell me that, according to tradition, Hasidic communities don’t study Torah on Christmas Eve, even up until the present day. As a child, based on the story my father told of this grandiose knockoff Thanksgiving story of Christians and Jews in Poland sharing a meal together, I saw this as the epitome of coexistence. And sure on Christmas Eve, as it’s known in Yiddish “nittel nacht”, Hasidim don’t go out to study in yeshivot, but instead stay at home.

Nonetheless, unlike my child-like awe of how both communities could sit together in harmony and eat a kosher meal on Christmas Eve, Medieval Christian tradition propagated the belief that the “Jews killed Jesus” and that they continue to reject him by living according to the Torah. Therefore, the existence of the Jewish community in general “mocked” the Christian faith due to their perseverance in the face of pogroms and blatant persecution. Historical sources document how Jewish communities throughout Central and Eastern Europe chose to abstain from Torah study, the only other day of the year that this applies is Tisha B’Av, for fear of the surrounding Christian population seeing them in the streets or in Jewish study spaces and violently attacking them for not celebrating the Messiah’s birth. Interestingly enough, depending on whether or not the local Christian population celebrated Christmas on December 25th or January 7th, Hasidim would remain in their houses the night before the observed holiday in their region. Certainly, with the Medieval legacy of perceiving Jews as “Jesus killers” and perpetuating blood libels, the genuine fear of violence due to anti-Jewish hatred must have prevailed as the leading reason behind this pause in engaging in Torah study.

As time passed and large cities became secular centers of innovation, I can imagine that the opportunity for a shared meal between some Polish Christians and their Jewish neighbors existed in twentieth-century Warsaw. Considering that some Poles chose to hide Jews during the Nazi occupation of Poland, I’m sure that the occasional Jewish friend was invited to a Wigilia. Sure, this might sound optimistic and I don’t have any hard evidence to prove that this actually happened, but the potential is certainly there. After nearly 1,000 years of living in close proximity to each other, I don’t think we should be surprised that a Polish Christmas meal has many similarities with a variety of Jewish traditions and is in fact kosher. Wesołych Świat, Merry Christmas, Tzoom qal, and Shabbat Shalom!