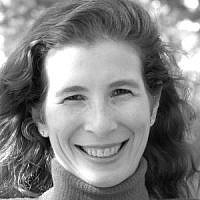 The Blogs
Alina Adams
Apply for a Blog
Advertisement
Please note that the posts on The Blogs are contributed by third parties. The opinions, facts and any media content in them are presented solely by the authors, and neither The Times of Israel nor its partners assume any responsibility for them. Please contact us in case of abuse. In case of abuse,
Report this post.

KVELLER VIA JTA — “So, considering the two constituencies, what time do you think this event will REALLY start?” my smart-ass 15-year-old asked as he, my husband, our two younger kids and I were walking to a dinner celebrating 25 years of the Upper West Side temple my daughter attends for day school and an African-American Harlem church working together on various civil rights issues.

When I didn’t reply, he followed with, “You know, Jewish Standard Time … Colored People Time …”

“We got it,” my husband interrupted. “We just obviously didn’t feel it was worth commenting on.”

To be honest, my husband wasn’t too thrilled to be heading there, either. It was Friday night. He’s a middle-school math and physics teacher. It had been a long week and he was exhausted. The only reason he was going was because I had phrased it as a fact, not a question. And the reason I had done that was because I wanted to make it clear to the kids that their attendance wasn’t optional.

Here’s the deal: I’m Jewish. My husband is African-American. Our kids identify as both. Except when it comes to community events, the scale tips much further into the Jewish column. We welcome Shabbat on Friday nights. We celebrate the Jewish holidays. (We’d recently hosted a seder led by my second-grader.) We read books sent to us by the nice people at PJ Library. We talk about how Israel is portrayed on the news and the Jewish subtext of movies. 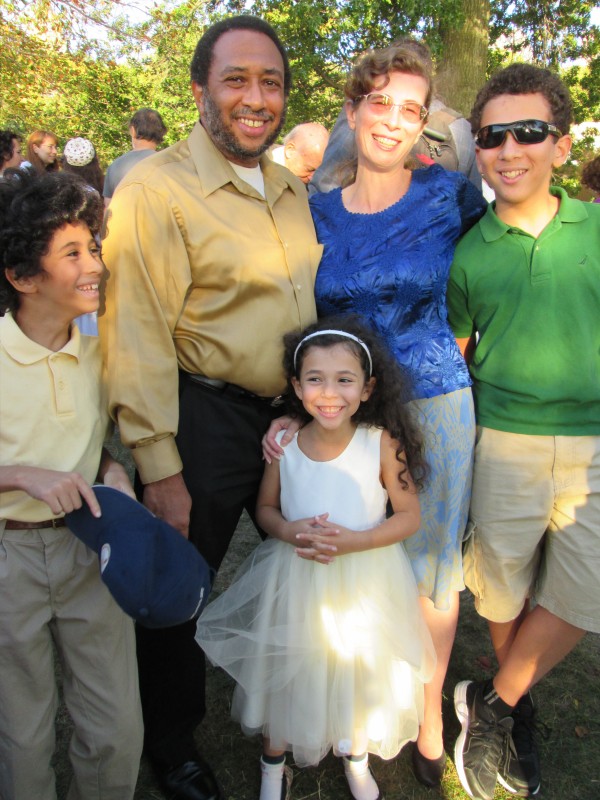 We also talk about the history of African-Americans. We discuss current events, especially recently the epidemic levels of police shootings with no repercussions. But there is more to being black than persecution. (The same thing goes for being Jewish. At the event, a handout listed all the things blacks and Jews have in common, and the bulk of it was who was killed where, when and in what numbers. Really? Is that it? How about beautiful brown eyes? Can we think of something even a little bit more positive?)

Unfortunately, when it comes to participating in the African-American community, I feel I – and by extension, we as a family – have been lacking. So much of the culture is church-based, and while my kids have been to a few gatherings at their paternal grandparents’ house of worship, it’s not a regular thing. We don’t celebrate Kwanzaa because my husband and I have philosophical issues with it. We try to buy what children’s books we can that feature African-American protagonists (“The Stories Julian Tells” series is awesome, by the way), and watch diverse movies and TV shows (though, for the record, both my husband and oldest son enjoyed the Asian-American immigrant comedy “Fresh Off the Boat” more than “Black-ish”).

There are those who wonder why I’m the one in charge of my children’s African-American upbringing rather than a more obvious person like, say, my husband. But he subscribes to the comedian Chris Rock’s philosophy, “If Johnny can’t read, that’s Mama’s fault. If Johnny can’t read because the electric bill hasn’t been paid, that’s Daddy’s fault.”

Oh, and there’s one more thing: I care more about it than he does. I suspect it comes from my Jewish background and all that “Thou shalt teach them diligently unto thy children, and shalt talk of them when thou sittest in thine house, and when thou walkest by the way, and when thou liest down, and when thou risest up” stuff.

To my husband, your culture is just your culture. You don’t have to do anything special to pass it on; it’s perennially there, available for the absorbing by osmosis.

Uh-uh. Not in my multicultural home, thank you very much. In my home we work for everything.

So when the opportunity came up to attend this dinner, nobody was given a choice in the matter; off we all went. And it was lovely. (Though, to give my oldest son credit, it did start 40 minutes past the listed time; stereotypes are stereotypes for a reason.) There were speeches from rabbis and preachers about how these two groups worked together to fight for voting rights, set up homeless shelters and tend to AIDS patients. The Rev. Martin Luther King Jr.’s “I Have a Dream” speech was read out loud, and we sang “Let My People Go” and “We Shall Overcome.” (As an added bonus, my daughter managed not to spill grape juice on the white lace dress she insisted on wearing.)

How much did my kids actually absorb? I don’t really know. But learning isn’t a one-shot deal. It’s a gradual process, layer upon layer of repetition until something finally sticks. Not unlike finishing reading the Torah … before starting it all over again.

And at the end of the evening, my husband said, “That was nice. Thank you for dragging me to something I thought I didn’t want to go to.”

Kveller is a thriving community of women and parents who convene online to share, celebrate and commiserate their experiences of raising kids through a Jewish lens. Visit Kveller.com.

About the Author
Alina Adams is the mother of three school-age kids who in her copious free time is turning her back list of traditionally published romance and mystery books into enhanced e-books, as well as collaborating with other authors to do the same.
Related Topics
Related Posts
Comments