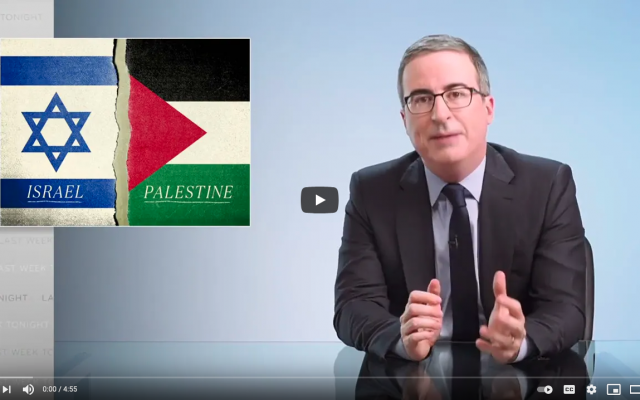 There is no way to know how the protests will end within the Palestinian Authority, but we can reasonably expect Hamas will work to strengthen its position by attacking Israel. The last round of violence against Israel was launched when Hamas sought to protest the PA’s cancellation of planned elections. This next round of violence will be Hamas’ attempt to put the final nail in the PA. From a policy standpoint, we are unprepared.

Our challenge in Gaza has never been military

The IDF will be prepared, but Israel’s challenge in Gaza has never been military. Despite the tragedies caused by Hamas’ attacks, Israel’s ability to defend itself is not in question. We’ve proven we can hit Hamas and largely avoid civilian casualties despite Hamas’ human shields. Yet every confrontation with Hamas has shortened our policy window as more of the world holds Israel, not Hamas, responsible for the violence.

“If you are in a fight where the other person cannot beat you, how hard should you retaliate when they try to hurt you?” asked Trevor Noah, on the popular Daily Show – a show with more impact on the future of US politics than many would like to admit. “Many will tell you Israel has a right to defend itself, to safety and security, but are silent on whether Palestinians have those rights too,” tweeted US Representative Ilhan Omar, a member of the thought leadership of the American Democractic Party. “There is no doubt that Hamas committed war crimes in shelling Israeli civilians,” writes Nicholas Kristof in the New York Times “But most scholars believe (with not quite the same certainty) that Israel also committed war crimes with its attacks on Gaza that were far more lethal to civilians than attacks by Hamas.”

These influential public voices are only a small sample of the growing sense among elites that Israel lost its justice, that Israeli civilians somehow deserve the occasional blood-letting. Whether these opinions are right or wrong is irrelevant. They are effective at changing international policy towards Israel.

We cannot wait until Hamas’ attacks to address this policy threat. We need to develop new policy initiatives to address the threat of Hamas.

We cannot wait until Hamas’ attacks to address this policy threat. We need to develop new policy initiatives to address the threat of Hamas. These initiatives should focus on the four target audiences critical to Israel’s security: first, Israel’s own public; second, the Jewish diaspora; third, global influencers; fourth, international policy makers.

Israel’s domestic public needs far more than the slogan “the fate of Sderot is the fate of Tel Aviv.” These slogans do not address the challenges communities in-range of Hamas short-range mortars and rockets face: the terror of running to bomb shelters while Israel responds to the attacks. Israel needs to publicly accelerate investment in civilian shelter infrastructure and enact a standing plan for temporary shelter when southern communities are attacked.  Israel’s leadership needs to send a clear message that it will not leave the residents of the South without sanctuary, both to strengthen their resilience and to make clear to the people of Gaza that the State of Israel always puts its citizens first.

The Jewish Diaspora, on the other hand, needs to understand the human story from both Israel and Gaza. We need to communicate less facts and figures and more deep human interest stories. These should focus on Israeli service providers who put their fellow citizens first under fire and on the Palestinians driven out of Gaza by Hamas’ brutal theocratic tyranny. The ongoing mistake of Hasbara training has been that we thought we could ‘explain’ to someone why their position is wrong. When well-meaning Jews in the Diaspora try to explain to their anti-Israel friends why Israel is not murdering Gazan babies they get decimated by largely untrue propaganda sob stories. It is absolutely true that Gazans suffer from each confrontation with Israel; they suffer as much if not more under the brutal tyranny of Hamas. We need to give the Jewish Diaspora the stories to explain how both Israeli and Palestinian citizens are victims of this same supremacy.

Global influencers (TV hosts, though leaders) require more than moment-by-moment reports on how Israel is careful to avoid civilian casualties. They also need to understand how Israel is sacrifices to avoid violence while Hamas sacrifices Palestinians. This requires Israel to stop its ‘the landlord has gone crazy,’ strategy and instead focus on a cool headed, parametric response.

Hamas launches airborne IEDs? Israel documents the damage, waits 48 hours, and then at a time of its choosing responds with a pre-declared response. For example, each airborne IED leads to one strike on Hamas. Each rocket, five. This not only addresses the question of proportionality, it also breaks the ‘Israeli attacks Gaza …after Gazans send protest rockets’ newscycle. Nothing is more ominous than a ticking clock, no time more dangerous for Hamas in Gaza if the people of Gaza have hard evidence that because of Hamas’ actions hundreds of bombs will start dropping two days from now.

Hamas launches airborne IEDs? Israel documents the damage, waits 48 hours, and then at a time of its choosing responds with a pre-declared response. For example, each airborne IED leads to one strike on Hamas. Each rocket, five.

Israel needs to better prepare the global community of policy makers by consulting with them, openly, about how they would respond to the Hamas threat. Israel should openly dialogue with the leaders of the US, China, Russia, India, UK, France, UAE, and Morocco, putting them on the spot to ask for their recommendations for responding to Hamas attacks. Israel should host wargames. Doing so will create a framework for future international conversations about how nations should respond to violence against their citizens, and will enable Israel to better understand its policy window for response.

And don’t forget the people of Gaza

The hidden fifth demographic is the people of Gaza. We should work hard to decentralize power and infrastructure in Gaza to limit Hamas’ ability to use imported resources into weapons. For example, instead of importing concrete we should send prefab houses. Instead of cash grants we should use digital currencies, ensuring every Gazan has digital banking independent from Hamas. Instead of importing petrol that can be used for airborne IEDs we should be providing solar and wind infrastructure that can set up resilient microgrids. Israel has to be creative about its engagement with Gaza to create opportunity for the Palestinian people to gain their independence from Hamas. DeBld, DeFi, DeEn: a decentralized Gaza will be a peaceful Gaza.

DeBld, DeFi, DeEn: a decentralized Gaza will be a peaceful Gaza.

What we do between the wars will determine the outcome of future wars. And there will be wars. We are now blessed with an opportunity to have a new government who can break from the policies of the past and plan for a better future. Now is the time to put in place the policy infrastructure to ensure Israeli and Diaspora resilience, maximize damage to Hamas, and prepare the international community for Israel’s inevitable response to Hamas violence.