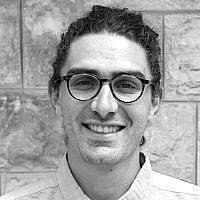 The Blogs
Zak Witus
Apply for a Blog
Advertisement
Please note that the posts on The Blogs are contributed by third parties. The opinions, facts and any media content in them are presented solely by the authors, and neither The Times of Israel nor its partners assume any responsibility for them. Please contact us in case of abuse. In case of abuse,
Report this post.

International law is the minimum standard of justice that the countries of the world have agreed to abide by. It is by nature a compromise—a set of fundamental principles that both enemies and friends say that they will respect. Although a rogue state or two sometimes refuses to consent to an internationally ratified agreement, international law represents the global consensus on a host of issues, from prohibitions against torture to statutes governing the rights of migrant workers.

Two countries to which I have a special bond routinely violate international law—the United States and the State of Israel. My home country, the United States, happens to be the most destructive rogue state since World War II. The United States not only runs afoul of international treaties to which it is a signatory, it remains the sole holdout on the most universally accepted treaty in the history of the world: the International Convention on the Rights of the Child. Israel has ratified this treaty, but as the B’Tselem human rights organization described in its latest report, Israel “regularly and systematically” violates the rights of Palestinian minors in its military court system.

Convention on the Rights of the Child

The Convention on the Rights of the Child establishes certain basic tenets as the cornerstone of all juvenile justice systems. Among these are the principles of serving the best interests of the child, exercising arrest and detention only as a last resort in the absence of any other option, and opting for rehabilitation over legal proceedings. To its credit, Israel has incorporated these guidelines within its domestic law. Furthermore, Israel officially acknowledges that minors should be entitled to special protections and that a juvenile justice system should function according to different rules than those that apply to adult proceedings. And yet we find that reality is diametrically opposed to the principles that Israel has accepted in theory.

Most people would agree that, as a general rule, giving parents as much involvement in their child’s criminal case as possible serves the child’s best interest. Again, in theoretical recognition of this truism, Israel’s recent so-called reforms to its military court system in the Occupied Territories aim, among other things to provide parents with a “central role” in their child’s proceedings. In practice, however, this has meant little more than allowing parents to be present in the courtroom and usually informing parents when the military plans to interrogate their child. Israel denies parents the right to be present during their child’s interrogation, and these interrogations often include threats, yelling, verbal abuse, and sometimes physical violence.

Contrary to legal principle which dates back to the Magna Carta of 1215, the Israeli military courts presume that Palestinian minors are guilty until proven innocent. This reversal is most clearly manifested in the courts’ policy of detention, whereby as a rule minors are kept in custody from the moment they are arrested until the completion of their prison sentence. With the interrogation completed and the charges filed, around 70 percent of indicted Palestinian children are then held in remand until the completion of their legal proceedings. It’s from this position of de facto imprisonment that nearly 100 percent of accused Palestinians cop a plea, recalling for American audiences the coercive plea bargaining endemic to our own domestic criminal justice system.

At this point, knowing nothing else, one might be forgiven for thinking that Israel arrests, detains, interrogates, and prosecutes only the most hardened juvenile delinquents—the Palestinian equivalent of the African-American youth that Hillary Clinton once called “superpredators.” But as it turns out, the most common charge against Palestinian minors is stone throwing. And it’s worth keeping in mind the age demographics of the children whom Israel prosecutes: In 2014 and 2015, 28 percent of the indictments that the military filed were against minors between the ages of 12 and 15, amounting to nearly 300 cases. These kids wouldn’t be old enough to drive a car in the United States, but Israel does consider them mature enough to serve time military prison.

A Façade of Legality

Based on hundreds of affidavits collected from Palestinian minors between 2012 and 2018, and building off previous reports on the abuse of minors’ rights in the military justice system from UNICEF, Defense for Children International — Palestine, and several UN committees, the B’Tselem report comes to a few conclusions. First, the abusive and coercive practices inherent to the juvenile justice system “deny minors any real opportunity to defend themselves against allegations.” Second, the reforms to the system, about which Israel has boasted in recent years, “affect nothing more than form” while the military “continues to ignore the basic tenets that are the cornerstone of juvenile justice systems under both international law as well as in many countries around the world, including Israel.” Third, B’Tselem reminds us that “military courts are not, nor can they ever be, neutral arbiters” and constitute a central apparatus of the occupation. Lastly, the military court system in general and the juvenile justice system in particular constitute no more than a “facade of legality” to conceal Israel’s violent abuses of Palestinian human rights, seeking ultimately to legitimize the occupation in the eyes of those remaining folks who still don’t see (or don’t wish to see) the iniquity.

This article belongs to the Palestine-Israel Journal.

About the Author
Zak Witus is a writer, whose work has appeared in The Forward, +972 Magazine, and Truthout. He is also community organizer with IfNotNow, a movement seeking to end Jewish-American support for Israeli apartheid. Zak earned a master's degree in Middle Eastern Studies from the University of Chicago (2020).
Related Topics
Related Posts
Zak Witus
Comments