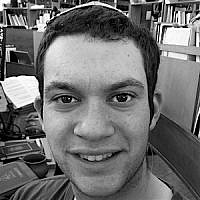 The Blogs
Tzvi Lev
Apply for a Blog
Advertisement
Please note that the posts on The Blogs are contributed by third parties. The opinions, facts and any media content in them are presented solely by the authors, and neither The Times of Israel nor its partners assume any responsibility for them. Please contact us in case of abuse. In case of abuse,
Report this post.

When I was a young teenager growing up in New York, Israel announced the Gaza disengagement. As a Modern Orthodox Jew, I couldn’t believe that the State of Israel would forcibly expel the thousands of Jews from their homes.

My family and friends demonstrated, wrote letters to Israel’s consul general and took out full page ads in Israeli newspapers, to little effect. That August in 2005, we watched in tears as entire families were forced out of their homes.

Despite the feeling of betrayel, it never crossed our minds to boycott Israel nor its government. We accepted it, and I, in addition to many of my friends, moved to Israel and served in the IDF, where we reside today.

With the latest Kotel controversy raging, what rankles many Israelis is the arrogant entitlement expressed by segments of American Jewry. Despite not living here, serving in the army or paying taxes, they expect that their Jewish birth merits them equal say in the inner workings of Israeli society.

It is understandable that members of the Reform and Conservative Jewry would like government recognition at the Kotel. What is not understandable is the flood of vitriol the Israeli government’s decision has unleashed. Wealthy Jewish Americans have been bombarding the Jewish Agency with threats, darkly warning of boycotts should Israel not succumb to its wishes.

These are the same Jews who constantly proclaim that Israel’s Democratic values are more important than its standing as a Jewish state. Funny- basic democracy means that the people living here have the final say, and any way you look at it, Reform Judaism does not exist in Israel.

Not only that, but the ‘natives’ don’t care about Reform Jewry. While American Jewry reacted hysterically to this whole saga, the Israeli media barely even covered it. Yediot Achronot first covered the story on page 9 the day after it broke.

It’s a known fact that the Reform Jewry does not follow Jewish law. What would transpire should the Reform demand that the Rabbanut accept pork as kosher in order to comport with the views held by the majority of diaspora Jewry? Would rejecting this demand also be considered “a slap in the face to world Jewry?”

Two woman once came to King Solomon, both claiming to be the rightful mother of a baby. King Solomon suggested cutting the baby in half with a sword to keep both sides happy. After one of the horrified woman swore to forgo her maternity rights in an effort to spare the child, King Solomon decreed her the rightful mother. Only one who was willing give up her ownership for the greater good could rightfully claim a connect, he said.

It’s a point the Reform Jews might want to take to heart as they declare total warfare on the state they claim to cherish.

About the Author
Tzvi Lev is is the Chief Marketing Officer of OlehPay. Originally from New York, he made Aliyah at age 20 and served in the Kfir Brigade.
Related Topics
Related Posts
Comments