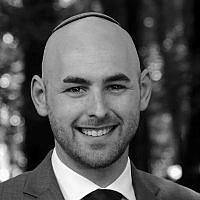 The Blogs
John Minster
Apply for a Blog
Advertisement
Please note that the posts on The Blogs are contributed by third parties. The opinions, facts and any media content in them are presented solely by the authors, and neither The Times of Israel nor its partners assume any responsibility for them. Please contact us in case of abuse. In case of abuse,
Report this post. 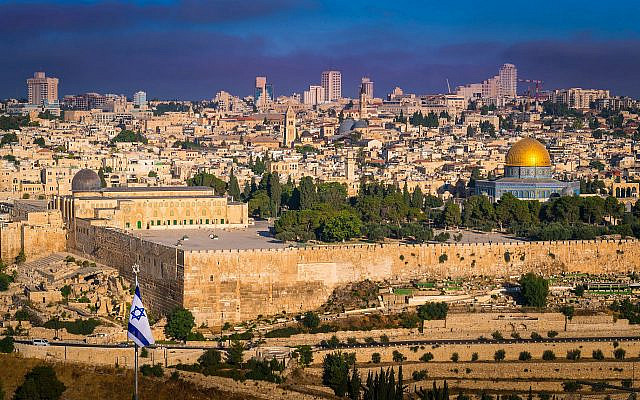 The Temple Mount, featuring the Dome of the Rock and the al-Aqsa mosque, in front of an Israeli flag (Image via Shutterstock).

Last Tuesday, a Jewish fast day mourning the events that culminated in the destruction of the First Temple, the provocative Israeli politician and new public security minister Itamar Ben Gvir perused the site where that temple once stood. Accompanied closely by security and wearing a bulletproof vest, Ben Gvir ascended the Temple Mount, the holiest site in all of Judaism, in the manner that Jews are permitted to, walked around its periphery without saying a prayer, then left.

Condemnations for this seemingly benign event have rolled in quickly. The United Nations Security Council convened an emergency session; the U.A.E. delayed Israeli Prime Minister Benjamin Netanyahu’s visit to Abu Dhabi; the U.S. State Department spokesman called it “unacceptable,” as did Turkey’s foreign minister; Saudi Arabia, Jordan, and Egypt all raised their own concerns, while the U.K. and France each issued statements reaffirming their commitment to the status quo on the Temple Mount.

One must acknowledge the context of these reactions. Correctly or not, there’s wide concern that Israel’s new government will, among other things, depart from the status quo on the Temple Mount, and Ben Gvir is the face of that concern.

The so-called status quo has been in place since the end of the Six-Day War. After conquering the Temple Mount from Jordan, Israel, in a decision made by then defense minister Moshe Dayan, gave control of it to a Jordanian administrative body with hopes that the defeated Arabs would be mollified. They weren’t, and Jews still pay the price for that decision. Today, Muslims enjoy ample rights to enter the site and worship, whereas Jews can visit only during very specific time slots in specific areas, while being closely monitored by police who ensure that they don’t pray.

Now, as Netanyahu’s office correctly noted, Ben Gvir’s visit didn’t breach the status quo. The controversial Otzma Yehudit leader has ascended the Temple Mount many times before, as have other Israeli ministers. No law, regulation, or traditional practice was violated. Nevertheless, the world has vigorously denounced what he did.

Was Ben-Gvir’s decision wise? Was it prudent? Probably not. The Temple Mount has long been one of the Middle East’s most contentious areas, and more than one open conflict between Israel and the Palestinians has begun because of events there. But that is a separate discussion. The simple fact is that the international community is assailing Israel for allowing Ben Gvir to do something he’s supposed to be allowed to do, in the manner he’s allowed to do it, that he has done before many times, and that many other Jews do every year. If this is how the world reacts to a prominent Jew visiting Judaism’s holiest site under the strictest terms, regardless of who he may be, what prospect is there for it ultimately acknowledging the legitimate Jewish religious rights to the Temple Mount?

Make no mistake: on its face, the Temple Mount status quo is absurd. If one were to ask most Jewish Israelis about whether Jews should be allowed to visit and pray on the Temple Mount, they would say yes. If one were to ask a disinterested observer the same question, he too would say yes. The only long term solution, as every reasonable person knows whether they’re willing to say it publicly or not, is equal visitation and prayer rights for everyone—Muslims, Christians, and Jews alike.

That doesn’t mean the status quo should change now, or soon, and it doesn’t mean Ben Gvir is the one to bring that change about (he’s not). It does, however, mean that global meltdowns about this issue are unwarranted and counterproductive.

Ben Gvir knows that most Israelis think this way. By going to the Temple Mount, he wants the world to react like this. It puts him in the public eye and indicates, as he tried to show in his campaign, that he alone is willing to speak unspoken truths and confront underlying tensions with Palestinians and Israeli-Arabs that other Israeli politicians would prefer to ignore.

By reacting the way they have to his visit, the United States, the UAE, and other countries are playing right into his hands. This entire charade allows Ben Gvir to set himself up as the great defender of Jewish rights on the Temple Mount, a position that he greatly values. Even if they (with good reason) find him execrable, most Jewish Israelis are sympathetic to his insistence on Jewish rights there. Creating a phantom international crisis out of a visit that did not violate the status quo only makes Israelis more likely to support him and others like him who can use the ridiculous situation on the Temple Mount to their political advantage.

If, by contrast, world leaders had listened to Palestinian complaints and left it at that, Ben Gvir’s public image, appeal, and justification for his politics wouldn’t have gained. Indeed, he likely would have been ignored, which is the last thing he wants.

One final note: it would be reasonable to assume that, at least on the Americans’ part, the condemnation of Ben Gvir was simply a piece of showmanship for the Palestinians and the parts of the Arab world still dedicated to their cause. The Biden administration likely still wants to demonstrate that the United States remains an impartial arbiter between Israel and the Palestinians. One can debate the wisdom of that goal. The bigger concern is, at what cost? The Palestinians aren’t really appeased by this approach—it only incentivizes them to continue supporting terrorism and avoiding serious negotiations—and seeing the White House condemn a visit like Ben Gvir’s can only make Israelis more disillusioned by their longtime ally. The Americans are backsliding into their unfortunate habit of making conflict in the Middle East more likely, not less, and now empowering politicians they detest in the process.

About the Author
John Minster is an Associate Director of Ideas at Tikvah, where he works on editorial, marketing, and administrative projects across Tikvah's publications, including Mosaic and MeirSoloveichik.com. He grew up in Traverse City, MI and spent time in Chicago and Washington D.C., before making aliyah in the summer of 2022. He lives in Jerusalem with his wife and daughter.
Related Topics
Related Posts
John Minster