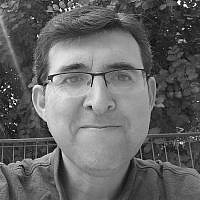 The Blogs
Dov Rabinowitz
Apply for a Blog
Advertisement
Please note that the posts on The Blogs are contributed by third parties. The opinions, facts and any media content in them are presented solely by the authors, and neither The Times of Israel nor its partners assume any responsibility for them. Please contact us in case of abuse. In case of abuse,
Report this post.

It is possible to save thousands of lives, quickly end the corona outbreak, and end the current lock-down. The best way to do this — possibly the only way — is shocking:

More specifically: infect and quarantine as many people as possible, who are very low-risk — especially 18- to 40-year-olds with no pre-existing medical issues. These people would acquire immunity, and be able to go back to work, and regular life. They could also volunteer with the elderly, work in hospitals, even visit their grandparents, all while presenting no risk.

Most importantly, this would immediately lower the transmission rate in the general population, to the point that the outbreak would end, and further outbreaks would become vanishingly unlikely. At that point, it would be difficult for a high-vulnerability person to contract the coronavirus, no matter whom they were with and what they did.

In other words, it would save countless lives.

Because this proposal runs counter to almost everything that current policies dictate, it is probably best to explain by clearing up certain misunderstandings — about epidemiology, the coronavirus, and this proposal itself.

But that was the flaw — you cannot seclude and protect a group when the strategy is indefinite and uncontrolled. One clear demonstration of this is that in England, many older and otherwise high-risk individuals are getting sick long after the strategy started, proving that they were still being infected when they were supposedly secluded.

What Israel is currently attempting is near the other end of the spectrum — to completely extinguish the fire, with no “burn.” That sounds good, but is questionably tenable in the immediate-term, and more importantly, nearly impossible to maintain.

In other words, the British method relies on almost everyone who is not vulnerable (and almost no one else) getting infected, at a manageable rate, before the restrictions on, and protection of, high-risk individuals collapse. The Israeli method, meanwhile, is nearly a mirror image — it relies on quickly achieving “no burn,” and requires that there be not one single undetected case existing in the entire country(!) when the restrictions are lifted — which must be within a manageable period of time.

Even now, with severe restrictions, the virus is still spreading at a rate higher than R=1, meaning that, on average, more than one new person is infected by each person previously infected. And if it seems like society is having trouble lowering that rate now (not just “lowering the rate of growth”), consider this: by definition, the longer you are successful with a “no-burn” policy, the more difficult it becomes.

But that is not even the worst of it. A “no-burn” policy that is successful in the short term merely prevents enough low-vulnerability people from acquiring immunity. In other words, it turns the entire country into an epidemiological time-bomb.

2. Wouldn’t this temporarily raise the burden on the healthcare system? And would it lower mortality for all groups, or save some old people only by risking the lives of young healthy people?

The answer to that is obvious — and it leads to a somewhat less obvious, but no less crucial, corollary: the biggest risk to a healthy 20-year-old is NOT that s/he will be infected. It is that a large number of 70-plus-year-olds will be infected.

That’s because, even if healthy 20-year-olds get a relatively bad case, the odds are still overwhelmingly in their favor — as long as they can get decent health care. Even if a huge number of 20-year-old friends are infected simultaneously, they are not close to overwhelming the system.

But if that same number of 70-plus-year-olds are infected, they will require the use of thousands of times as many ICU beds and ventilators. The system will be overwhelmed. And that is when everyone, including the rare seriously ill 20-year-old, is actually at risk!

This proposal lowers both the short- and long-term burden on the healthcare system, and saves lives in both low- and high-risk groups.

3. What about flattening the curve?

According to many epidemiologists, it is inevitable that about 70% of the population will be infected. The real questions are of identity and timing.

In other words, we already know how many people will be infected. So every low-risk person infected means fewer high-risk people infected. And every person who knows exactly when they get infected, and who seriously quarantines, thereby improves the situation in two ways: they not only avoid infecting vulnerable people, they also create a safer situation for every point in time going forward, because there is less opportunity for rapid spread of the virus.

The dangerous part of the curve is dangerous for a reason. It is not because of all the minor cases. And it is certainly not because of all the asymptomatic cases. It is because that is the time when healthcare resources for critical cases are pushed to their limit, or beyond. This plan replaces many thousands of critical cases with an equal number of minor and asymptomatic cases.

4. Do we really want to live in a society, in which the government forces people to get corona?

There are really two answers to this question.

The first considers whether it is right to force certain people to put their life at a small but real risk, in order to save many, many others. There are serious legal, moral and ethical issues inherent here.

But wait — this is literally the job description of the army.

So, from that perspective, it seems obviously logical to enforce mandatory participation.

The other option is to accomplish this on a volunteer basis.

Why would a person volunteer to contract a disease? Well, there are some practical, and even “selfish,” reasons. After their volunteer stint is over, they will be able to lead a completely normal life — including work, social life, extended family, recreation, sports, etc.

Based on the current social climate — which seems to be characterized by a healthy civic responsibility and desire to help others, mixed with a growing annoyance with the restrictions and their ensuing economic distress — an excess of volunteers seems possible. (Preference would be given to parents with a child at risk — one remaining with the child while the other volunteers, then switching — thereby eliminating the greatest danger to the child’s life.) And there would almost certainly be complaints from at least some people who were excluded from volunteering because of age and health background requirements. In other words, a volunteer option would likely be robust, possibly enough to do the trick.

And there’s a lot we don’t know. Current techniques and strategies are unable to track the progress of the virus in real time. Hopefully, high-vulnerability populations have not had as much exposure as is feared — but this is also not known. And until we have reliable data regarding such questions as what percentage of the population has already acquired immunity, we’re essentially “flying blind.” Maybe we’re miles away from herd immunity. Or maybe we’re a lot closer than we think. The same is true for a vaccine — we keep hearing 18 months minimum, but maybe there will be a breakthrough.

Here’s the epidemiological, mathematical, undeniable bottom line: as long as as it is true that there is a highly significant difference in risk levels to different identifiable segments of society, and as long as some high-risk people are still becoming infected, this plan saves lives.

It’s not too late.