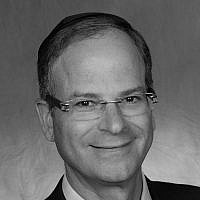 The Blogs
Allan Jacob
Apply for a Blog
Please note that the posts on The Blogs are contributed by third parties. The opinions, facts and any media content in them are presented solely by the authors, and neither The Times of Israel nor its partners assume any responsibility for them. Please contact us in case of abuse. In case of abuse,
Report this post.

We are deluged with so many different COVID19 numbers. Epidemiologists care about one set of numbers, public health administrators another set, and hospitals and healthcare providers a different set of numbers. The politicians try to put this together in a way that helps the public without risking their political careers. Government bureaucrats give us data that is both politically correct and heavily flavored with CYA. But if you’re just a simple citizen, like me, the only question you have is “what are my chances of crossing paths with a person spreading the virus?” Let’s call that the Exposure Number. Give us the Exposure Number and each person can decide if they want to take that chance.

We already know so much. We know that many people spread the virus without being sick. We know that most people who get sick do fine after a few days, but some stay sick a bit longer. Some get really sick and have to go to the hospital. A few of those people end up on ventilators and sadly some pass. We know who is at high risk for a bad outcome and who isn’t. We also know that many of the cases are in nursing homes. We are smart enough to digest this information and realize that there are always a few exceptions to every rule. Once in a while a young healthy person has a bad outcome and a very old person recovers. The newsworthiness of these exceptions proves the rule.

Before I show you how easy it is to calculate the Exposure Number, or the chance of crossing paths with a random person spreading the virus, ask yourself what you’ll do with this number. That’s the hard question. Have you ever gauged your level of risk aversion? Probably not. Is 1 in a 100 rare enough? How about 1 in 500 or 1 in 1000? Do you only feel safe at 1 in 10,000? Most people don’t think statistically and have never even asked themselves that question. You know somebody will get killed on the road today but you don’t do that analysis. You just assume it won’t be you and get in the car. One needs context to answer a risk question. But let’s start by calculating the Exposure Number. What are the chances you will cross paths with someone carrying the virus? To answer this question, we only need 2 numbers:

We also need to make a few assumptions.

For example, if 100 new people tested positive today and every day for the last 10 days, and it takes 10 days to stop spreading virus, there will be 1000 people walking around today spreading virus. Divide that by the number of people in the group being tested and that tells you your chance of crossing paths with a viral spreader.

Now comes the hard part. Can you tolerate 1 spreader in 303 or 482 random people? To help answer that question, let’s bring in some facts. The CDC claims that simply walking by or very briefly standing in the vicinity of a positive patient isn’t even a low risk exposure. It’s possible you’ll get it from a positive person in that situation, but only remotely probable so we don’t count it. That’s what statistical thinking is about. Even a low risk exposure requires a few minutes of close contact, such as sitting within a few feet of a spreader for a few minutes. Moreover, the virus isn’t evenly distributed in the community. Just like 24% of the positives are in nursing homes, many of the other positives are likely to live in high density areas, such as housing projects or crowded neighborhoods, or gather in crowds for cultural reasons. Population density is a major factor in spread. So, if you and your frequent contacts don’t live in high density areas and haven’t been crowding together, your odds got a whole lot better. Outdoor activities in sunlight make transmission even less likely. Even if you spend some time with a spreader, there is only about a 1 in 6 chance you’ll get it, based on the findings on the cruise ship and aircraft carrier. Even if you get it, you might have no symptoms or only mild symptoms. Yes, some young healthy people do die but those are rare enough that it makes the news. Sort of like “man bites dog” news stories. Nonetheless, the elderly and people with underlying medical conditions should be more careful.

Ask yourself how many random people a day do you spend time with and how much time do you spend with them? If you are meeting and greeting dozens of new people every day, your likelihood of running into a random spreader is much greater than if your circle is more limited. Each person will have to decide the Exposure Number at which they feel safe and determine how close they are to reaching that number.

My recommendation is that in areas where the hospital systems haven’t been overwhelmed, which is in most of world, the authorities should give us the Exposure Number and let us make our own decisions. Each person, in the context of their age, needs, lifestyle and health status can decide if he wants to go out or stay indoors, if and where they want to wear a mask, and to whom they will allow themselves to be exposed. Making an assessment based on the Exposure Number, in conjunction with hand washing as needed, social distancing from random people we don’t know to be low risk and the application of some common sense will allow many of us to get back to some semblance of normal life sooner than later.

About the Author
Allan I. Jacob, MD is a Board Certified Internist and Nephrologist with more than 40 years experience in both clinical and administrative medicine. He currently serves as Chief Medical Officer of Physicians Dialysis, a medium size US dialysis provider.
Related Topics
Related Posts
Comments