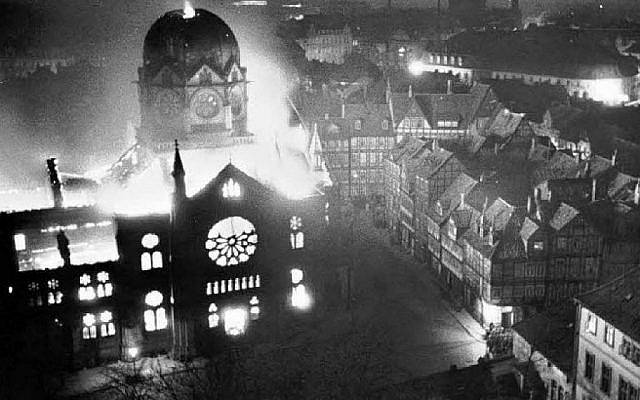 As we approach the 84th anniversary of Kristallnacht, the events in Nazi Germany have made headlines over and over again. Comparisons of MAGA Republicans to fascists, comments that if the elections go a certain way, we are on the road that Germany took in the ’30s, remarks about Jews and poisonous power that sound a lot like some of those out of the mouth of Joseph Goebbels.

Clearly invoking the Nazis to heighten one’s condemnation of policies, like abortion or gun control, is offensive, and completely ignores the level of evil that Nazism represented. Kristallnacht reminds us that even before the Final Solution was organized, the Nazi demonization of the Jews was heading in a direction unseen before in the sorry history of antisemitism.

The devastation of that night became a climax in a five-year period of Nazi rule treating the Jew as a poisonous object, turning state organs, including security forces, against German Jews stripped of their citizenship and their dignity. All of this was a result of continuous propaganda campaign against the Jews influencing the willingness of the German public either to participate in the attacks of Kristallnacht or stand by while Jews and synagogues were assaulted.

Less clear are other elements of the Nazi period that may be a more appropriate subject of comparison. One example of this is Russia’s unprovoked invasion of Ukraine in the context of Vladimir Putin’s repeated statements over the years that the greatest tragedy of the 20th century was the breakup of the Soviet empire. In understanding how urgent it is that the international community does not allow Putin to succeed, invoking German expansionism in the 1930s and the West’s appeasement, all of which led to World War II, is not necessarily a bad thing. While there are many differences between now and then, it is not inherently offensive to cite those historical events if done with care and scholarship. In some arguments, such context could be helpful in painting a fuller picture of historical consequences.

Less helpful are the polarized and lazy statements which suggest that if certain parties or movements gain power we are automatically heading toward a Nazi state. There are ways to make a point about how dangerous certain extremist views and politics may be without plunging immediately into the Nazi analogy. Such an argument is farfetched, considering the huge difference in the shaky democracy that was the Weimar Republic with the strength, depth and institutionalized elements that exist within a diverse American democracy.

At the same time, it is important to study how Germany devolved so quickly from a democratic state to one that became a totalitarian one that used democratic processes to gain absolute power. There is much to be learned about the legal breakdown, the cultural and media takeover, the propagandizing of a population all in a short period of time. Indeed, ADL and the US Holocaust Museum have jointly presented such programs for American law enforcement and intelligence agencies for several years.

This year’s anniversary of Kristallnacht should lead to a recommitment to educate students about what that night signified, how important it is to stand up against all forms of hate before they reach inflection points like Kristallnacht and eventually genocide. Added to this, we must commit and work to strengthen our democratic institutions and values.

The goal of all this is to learn from history without going down a problematic road in suggesting that America may be heading there. There is a fine balance needed to avoid invoking offensive comparisons that are inaccurate and deliberately polarizing, and simultaneously recognize that any democracy, no matter how strong, should never take its democratic values and institutions for granted.

In this respect, there is still much to be learned from the history as not to repeat it.