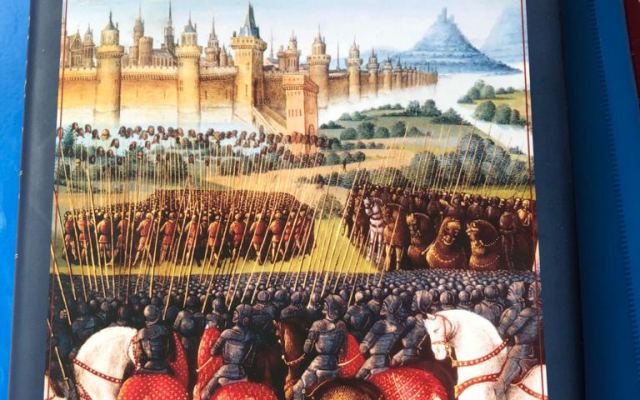 Jacket art: Siege of Antioch in Turkey during the 1st Crusade in 1098. Manuscript/Photo: Bridgeman Images

This book, with its sixty pages of notes, twenty pages of bibliography, lavish illustrations and extensive index, is a thoroughly-researched study of events that took place between the late eleventh and mid-fourteenth centuries during which crusades were launched from Europe to the Levant. The author does not deal with the crusades chronologically, although he provides a list of dates and events at the beginning of the book. Rather, the book proceeds according to specific subjects in chapters devoted to them, such as Justification, Propaganda, Recruitment, Finance, Logistics, etc.

Furthermore, the level of detail in the book concerns every aspect of the broad topics covered. Thus, in the chapter on Logistics, we read how the boats that took the armies across the Mediterranean were constructed, and how they were adapted for the transportation of horses – an essential component of every fighting force at the time. Thus, as well as separate stalls in the ship’s hold, every stall contained a cloth cradle within which each horse would be strapped during the voyage, to prevent it from falling as the ship rolled.

I must admit that my knowledge of the various crusades was rather sketchy before I read this book. Now I know that the First Crusade, which succeeded in capturing Jerusalem from its Turkish rulers lasted from 1096 to 1099, was the result of preaching and instigation by the Pope and other clergy. This process culminated in the Council of Clermont, which proclaimed the Crusade, and set the wheels in motion for its execution, with the eventual establishment of crusader rule in the Levant. The Fifth and essentially final Crusade, which lasted from 1217 to 1221, ended in Muslim victory and the failure of the crusaders to recapture Jerusalem.

Where I live, just outside Jerusalem, there is a hilltop called Kastel with the remains of a Crusader castle, which in turn was built on top of a former Roman stronghold. In fact, throughout modern Israel (as well as Lebanon, Jordan and Syria) there are remains of crusader castles and other edifices. I have been toured the impressive halls once inhabited by the Templars which have been excavated in Acre, the last crusader stronghold before their defeat by Saladin’s successors in 1291. I have also visited the site of the battle of Hattin (Hittin in Hebrew) in Galilee, where Saladin routed the crusader forces in 1187, marking the beginning of the end of the crusader Kingdom of Jerusalem.

Organising a crusade involved a great deal of planning, such as prior knowledge of the geography of the various regions, the vagaries of possible land and sea routes, the need to find food and equipment for the troops, the nature of the indigenous populations of the countries on the route, and the necessity of negotiating treaties with the rulers of those regions. Prior to each successive crusade (there were five main ones, as well as several minor ones) various members of the clergy would embark on preaching tours throughout Europe to rally support among the local populace and set in process the arrarngements for amassing men, weapons and materiel for the promulgation of what was seen as a holy war to rescue the places sacred to Christians from the hands of infidels (i.e., Muslims).

Fired up by a combination of religious fervor, the promise of salvation and remission of sins, as well as the possibility of material gain, many thousands of the inhabitants of the countries of Europe gathered together to make their way to the ports or other points of departure for the Levant. The rulers of each country, supported by the local aristocracy, were also instrumental in the crusades, providing physical, financial and moral support for the venture. Taxation was an important element in the funding of each crusade, and in many instances the various monarchs used the opportunity to impose additional taxes on the local population, including the Jewish communities (whose property was often expropriated). The massive forces mustered sometimes attacked local populations, and this was especially so with regard to Jewish communities along the Rhineland (Worms, Wormaisa, Mainz), where large numbers of Jews were massacred.

The crusades were not limited to fighting against the Turks or whoever controlled the Holy Land. In 1208 what was known as the Albigensian Crusade was initated by the Pope against the Cathars in the Languedoc region of southern France who adhered to a different version of Christianity than the Catholicism of Western Europe. This resulted in the deaths of many thousands of the local population. Between 1239 and 1268 periodical ‘crusades’ were launched against the Hohenstaufen rulers of Germany and Sicily by rival German dukes. The various Popes were actively involved in the crusades, and usually also instigated them.

The overall picture one gets is that war was a way of life for all or most of Europe, which was on a war footing for a large part of the Middle Ages (and certainly beyond that, too). This can perhaps even be traced back to 1066, when William, Duke of Normandy, massed forces, crossed the channel and invaded England. War seems to have been a way of life for large segments of the population, so that its promulgation, organization and implementation, as well as its sanction by the religious authorities, constituted an integral part of daily life, affecting every stratum of society. This was what determined the fates of millions of inhabitants of Europe for many centuries, even until quite recently.

One can only hope that the age of wars in Europe has now come to an end.