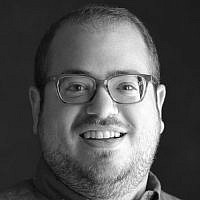 The Blogs
Eric M. Leiderman
Apply for a Blog
Please note that the posts on The Blogs are contributed by third parties. The opinions, facts and any media content in them are presented solely by the authors, and neither The Times of Israel nor its partners assume any responsibility for them. Please contact us in case of abuse. In case of abuse,
Report this post.

For an untold number of years people have been fighting about why Conservative Judaism is dying, and how to stop hemorrhaging members to other movements and denominations. Yet the answer is actually quite simple, and not so surprisingly the one we refuse to entertain, it is to live within a walkable distance of our synagogues.

This is the first in a series of essays on Conservative Judaism, and the direction in which the Conservative Movement seems to be heading. While many view Conservative Judaism as a centrist alternative to the series of rightward shifts within Orthodoxy and the progressive force of Reform Judaism this will not be the position here. Let us push past the symptoms and maladies of today (we will come back to them in later essays) to find the root cause of the dissolution of the traditional Jewish community.

We have an edifice-complex. Instead of yearning for the days of yesteryear, when our large buildings were full and never-enough-parking was an issue, why not focus on today’s core constituency: people who actually want to join our communities?

For almost a half century the Conservative Movement built large buildings to be filled by their swelling numbers. Numbers that on a weekly basis may never have actually been quite as high as we would like to nostalgically remember. Alas we mourn when synagogues close their doors, whether in merger or for good. But why? We know from census data that The Jews have not disappeared. We have simply moved.

There may be any number of methods to solving the riddle of geography and shifting populations. But perhaps with little to no surprise our movement’s leadership continues to choose the pessimistic approach. It seems to me, at the ripe old age of 25, that to be considered an adult one must believe that the sky is constantly falling. Synagogue lay leadership yearn for a time when the pews were filled, and new “best practices” ideas are being developed or recycled on how to attract people to fill those pews. But again I ask why?

There are three major components at work here which simply do not fit together. The first is the synagogue. The second is the people. And the third is that the Conservative Movement has been wildly successful when it comes to teen programs and summer camping; to use the technical term: experiential education, learning by living.

For a high schooler to hold a position of responsibility within United Synagogue Youth (USY) they must maintain a basic level of Shabbat observance. It is expected at USY programs held on Shabbat that a basic level of Shabbat observance is kept in communal spaces. For those of elementary, middle school, high school, through college age and older who participate in Camp Ramah programs, again, there is an expectation that traditional Shabbat observance is kept. How have we failed so miserably to translate this basic Jewish tenant, codified by the Fourth Commandment, into our synagogue communities?

We could blame suburbanization and upward social mobility afforded by the latter half of the twentieth century. But we would be wrong. Our brothers and sisters in the Modern Orthodox world are in the exact same position when it comes to suburbanization and upward social mobility, and yet they have not only maintained but have grown the number of upper middle class traditional Shabbat observant communities.

Every problem Conservative Judaism faces today can be solved when we decide to dismantle our gestalt of the edifice-complex. Creating neighborhood synagogues which foster sustainable, close knit, multigenerational communities. Even if people use the parking lot on Shabbat, the synagogue experience becomes one of social interaction instead of a chore because it is required for enrollment in the religious school. While it may seem quaint for post-services lunch plans to made, or spontaneous playdates to happen, living close to your neighborhood synagogue is the singular commonality of all sustainable Shabbat observant communities.

Unfortunately, it seems ever more apparent that for such a paradigm shift to occur we would require a concerted effort from the leadership within our movement, particularly from the synagogue umbrella organization. Leadership which continues to refuse taking any tradition oriented position lest we alienate the ever more disassociated masses.

Future essays will discuss the Conservative Movement’s shift towards a more progressive and less traditional identity, particularly looking to answer: why are significant numbers of Ramahniks and USYers joining Orthodox synagogues?

About the Author
Eric Leiderman is a Deputy Member to the Zionist General Council, Founder & Creative Head at MASORTI X, President & Co-Founder of MASORTI On Campus, and a board member of MERCAZ USA. Eric grew up in the New York Metropolitan Area, and has spent significant time in several North American Jewish communities as well as in Israel. He currently resides in Chicago, Illinois with his fiancé.
Related Topics
Related Posts
Comments