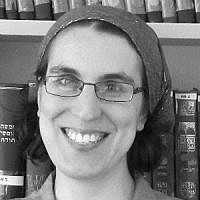 The Blogs
Miriam Gedwiser
Apply for a Blog
Please note that the posts on The Blogs are contributed by third parties. The opinions, facts and any media content in them are presented solely by the authors, and neither The Times of Israel nor its partners assume any responsibility for them. Please contact us in case of abuse. In case of abuse,
Report this post. 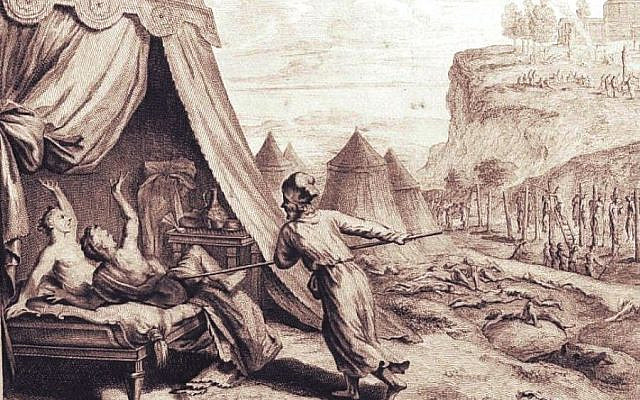 Zimri and Cozbi are slain by Phinehas (Mortier's Bible), 1700. (Wikipedia)

The story of Pinchas at the end of Parashat Balak can raise uncomfortable questions about God’s wrath, vigilantism, the rule of law, and so much more. So it always feels fitting that, due to the breakup of the parshiyot, we get to revisit all these questions the next week when we read Pinchas’ eponymous parshah, which begins with the epilogue to his story:

What is berit shalom? Why is shalom, peace, the reward (or consequence?) for Pinchas’s vigilantism?

Several medieval commentators suggest a very concrete connection: having killed Zimri and Kozbi, both of whom were prominent public figures, Pinchas risked becoming the victim of a revenge killing. Berit Shalom protects him from such a fate. (See Ibn Ezra, Hizkuni, Bekhor Shor, among others)

Others suggest a more conceptual connection. Ralbag, for example, explains that “just as he (Pinchas) made peace between Israel and God, exalted, so he will partake in chasing peace (redifat ha-shalom).” Pinchas’s vigilante killing brought “peace” because it appeased a wrathful God, stopping the plague that God had sent in response to the Israelite’s sins at Baal Peor (Num. 25:7-10), and perhaps also to their leadership’s ineffectual response (Num. 25:6).

In his comment, Ralbag invokes the famous description of Aaron, the father of all priests, as ohev shalom ve-rodef shalom, a lover of peace and a pursuer of peace (Avot 1:12). But when we talk about Aaron the peacemaker, we don’t usually think of Pinchas’s brand of peace-by-skewering-sinners! Aaron, rather, is described as a peacemaker in the more conventional sense of the word, resolving interpersonal disputes through kindness, cajoling, and perhaps some half-truths. In an oft-cited example, Aaron would tell each member of a feuding pair that the other wishes to forgive him. What does it mean for Pinchas to be assimilated into this Aaronic, priestly legacy on the basis of an extreme act of violence?

Rabbi Samson Raphael Hirsch responds to this seeming contrast by reaffirming the importance of Pinchas’s violent intensity. He argues that God gave the “covenant of peace” specifically to Pinchas, whom superficial thinkers might consider a “disturber of the peace,” in order to show that true peace does not mean avoiding violence in all situations. Going along with evil, or with God’s enemies, for the sake of “peace,” i.e., absence of conflict, is wrong. By interrupting the Israelites’ slide away from God, Pinchas “restored the foundation for true peace,” that is, of life in keeping with God’s will.

Despite the forcefulness of R. Hirsch’s reading, it is still at odds with the traditional understanding of “peace” in the priestly context. On Sanhedrin 6b, for example, the Talmud sets out a dichotomy between the lawgiver Moses, whose catchphrase is “let the judgment pierce the mountain,” and Aaron, “a lover of peace and a pursuer of peace,” who “would apply peace between one person and the other.” In context, the Talmud is discussing judicial compromise (pesharah). The text identifies Moses with the opinion that judicially-sanctioned compromise is blasphemous (because the strictly legal outcome should always be enforced), and Aaron with the opinion that compromise is a positive outcome (because it generates more harmony between the parties). If we had to place Pinchas, the literal piercer of humans, on one side of this dichotomy, I would imagine it would be with Moses and the judgment that pierces mountains rather than with Aharon and the compromises that preserve peace.

Pinchas, then, is something of a liminal figure. His “peace” is not quite like that of other priests, and he also partakes of the stricter elements associated not with priests but with the law. From a different angle, R. Ovadia Seforno argues that the berit shalom of Pinchas signifies an ability to overcome death (drawing on rabbinic literature that finds Pinchas operating during the time of the Judges and even after, as Elijah the prophet). Death is an expression of lack and finitude which, in turn, according to Seforno, derive from “the opposition of opposites.” Pinchas’s “peace” allows seemingly opposing tendencies to coexist.

Netziv, R. Naftali Tzvi Yehuda Berlin, brings the idea of balance out more concretely. According to Netziv, Pinchas receives the covenant of peace because he removed God’s anger. But this is not simple measure for measure. Rather, the covenant of peace is a forward-looking gift that takes into account both the benefits and the downsides of Pinchas’s actions. “The nature of the deed that Pinchas did, killing a person by his hand, would tend to leave in his heart a mighty feeling even afterwards.” Pinchas’s zealotry may have been proper for the extraordinary circumstances in which he applied it, but he is in danger of sliding into zealotry too easily, perhaps without the requisite extenuating circumstances. God’s covenant of peace rewards Pinchas, whose motives were pure, with the ability to return to equanimity.

Netziv’s story is not simply one of an extraordinary breakthrough of violence quickly restored to a peaceful balance, however. The balance is tenuous, and neither side is always correct. Netziv cites a midrash that places Pinchas with the Israelite leadership in the period of the Judges, and blames him (and them) for failing to exert more zealotry to stop the many excesses of that anarchic period. God guarded Pinchas against too much zealotry, but Pichas failed to maintain the balance and ended up with too little.

It’s not that Pinchas has to find a middle path, behaving as a moderate between two extremes at all times. Rather, he has to maintain the capacity to act with both extremes, and the attunement to know which is called for when.

Pinchas, according to midrash, lives for centuries before disappearing to heaven (but not dying) as Elijah. The Mishnah in Eduyot (8:6) records the opinion of the sages that Elijah, the herald of the Messiah, will not come to declare what is pure or impure, or to rule on matters of priestly status, but rather “to make peace in the world.” Throughout the centuries, Pinchas has to carefully maintain both his potential for uncompromising, piercing zealotry and his capacity for harmonious compromise. Perhaps the messianic vision of the mishnah, however, is that in a perfected world, uncompromising zealotry becomes unnecessary.

About the Author
Miriam Gedwiser teaches at the Drisha Institute for Jewish Education in New York City, where she lives with her spouse and three children.
Related Topics
Related Posts
Comments
Advertisement