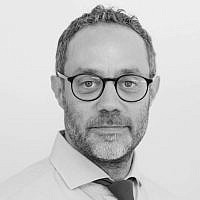 The Blogs
Tomer Warsha
Apply for a Blog
Advertisement
Please note that the posts on The Blogs are contributed by third parties. The opinions, facts and any media content in them are presented solely by the authors, and neither The Times of Israel nor its partners assume any responsibility for them. Please contact us in case of abuse. In case of abuse,
Report this post. 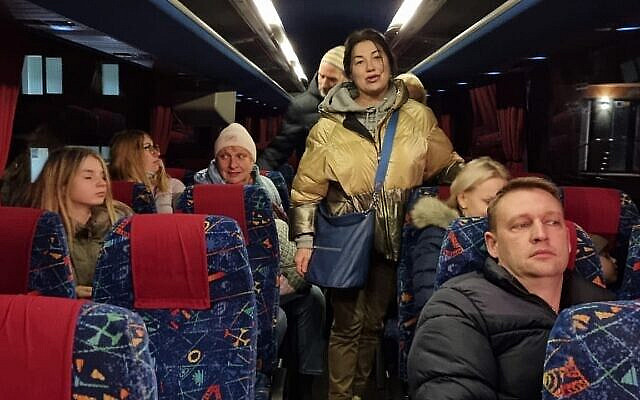 A group of Ukrainians travel to Poland before immigrating to Israel, on February 26, 2022. (Jewish Agency)

The war in Ukraine is already generating an influx of refugees fleeing the crisis and seeking asylum. Naturally, these will first flee on foot to Poland, Moldova, Romania, Slovakia, and Hungary, and from there may spread throughout Europe.

It is likely that some of them will seek to come to Israel, to their families who live here. The question is, how will the State of Israel treat them?

In recent years, when the situation in Ukraine was still normal and relatively safe, Ukrainians poured into Israel to work here. They took advantage of the visa exemption, the relative ease of entry at Ben Gurion Airport, the loopholes in international refugee law to get here on tourist visas – and while they were here applied for asylum, usually without justification.

In the framework of the asylum application process, they were granted visas that allowed them to work undisturbed. The industry has evolved, personnel companies have sprung up like mushrooms after rain, and the state – with considerable delay and slow response – has established procedures that allowed for a quick rejection of Ukrainian asylum applications.

Today, as fate would have it, the citizens of Ukraine face a real crisis that gives them legitimate protection rights under international law.

Former Ukrainian citizens who live in Israel lawfully by virtue of relationships with Israelis or by virtue of having come on aliyah, and who are anxious about the fate of their loved ones who remain in Ukraine – elderly parents or brothers and sisters, and even children left behind – are now naturally eager for their families to come to Israel and be by their side in a safe country away from the inferno, if only until the crisis passes.

Here the Israelis can take care of their loved ones and avoid the excruciating anxiety for their safety.

Israeli immigration laws allow the country to extend visas for those entering from Ukraine as tourists for up to two consecutive years, even without being recorded as asylum seekers, but equally allows border control at Ben Gurion Airport to refuse entry for Ukrainians, on account of “suspicion of illegal settling.”

This vague phrase does not apply – and should not apply – when a person lands at Ben Gurion Airport and seeks asylum as international law allows him. In this case, seeking asylum is not an attempt to settle illegally, it is a plea for political help.

But the crisis in Ukraine has implications for other areas related to immigration to Israel. The romance between citizens of Israel and those of Ukraine has never been stronger, and many couples of Israelis and Ukrainians (mainly Ukrainian women) seek to live their marital lives in Israel. The Population and Immigration Authority conditions the opening of the procedure on the submission of verified certificates of origin from Ukraine and sometimes even in a legitimacy interview of the foreign spouse conducted at the Israeli consulate in Kiev.  But, at this time, there is certainly no ability to obtain such documents or make a consular interview appointment.

The practical significance of the current war is, at best, a prolonged delay in the process and denial of a work visa that would enable the spouse to conduct a normal routine of living. At worst, it will lead to the full closing of the relationship file, meaning the couple will have to begin a long legal challenge. Here, too, the population authority has the power – and it is appropriate – to waive the presentation of the certificates at this time, as it is done when the spouse is an asylum seeker.

Prime Minister Bennett announced that Israel would favor providing any humanitarian aid needed for Ukraine. It is a moral imperative that the state extend a hand to every person in crisis, but first of all, it must issue two clear guidelines: the first, to delay the deportation of Ukrainians living in Israel without status until the situation clears up; the second step is to make it easier for the loved ones of Israeli citizens, in such a way that will allow partners and relatives of Israelis to reach Israel without bureaucratic delays.

About the Author
Tomer Warsha is a prominent lawyer, specializing in human rights for the past 20 years. He is founder and director of Israel's leading Immigration & Citizenship law firm – "Tomer Warsha – Law Firm" (also recognized by Dun's 100 ranking of 2021). Over the years, Tomer Warsha has successfully led many fundamental constitutional cases and is responsible for important laws and precedents. Warsha also regularly gives lectures at universities and frequently appears on television.
Related Topics
Related Posts
Comments