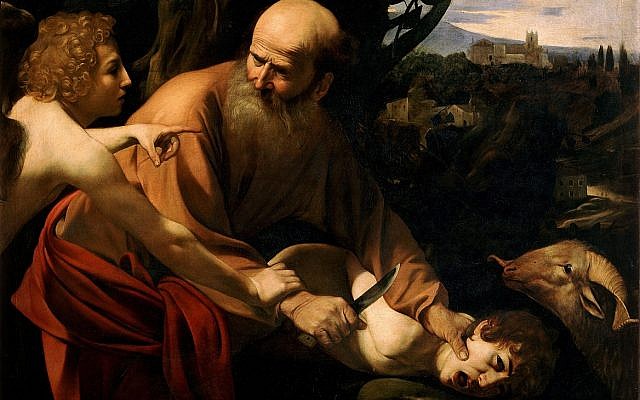 The Sacrifice of Isaac, by Caravaggio. (Wikipedia) The moment when the angel replaces Isaac as the object of sacrifice with the ram.

Who decides the correct and fitting manner to worship God? Just because others worship in a certain way, which may be seemingly worthwhile, if that approach was not commanded by God, it is out of bounds. Comparing the biblical narrative of the binding of Isaac to the story of the deaths of Aaron’s sons clearly teaches that God’s will and His will alone determines what is appropriate and beloved by God and what is not. The severity and swiftness of the punishment in the case of Nadav and Avihu powerfully demonstrates that even religious acts conducted with apparently worthy intentions can be unacceptable manifestations of fulfilling God’s will if they fall outside of mandated religious practice.

“And the Lord spoke unto Moses, after the death of the two sons of Aaron, when they drew near before the Lord, and died” (Leviticus 16:1).

Death of children, regardless of the circumstances, is always brutal. Aaron’s subsequent silence is reminiscent of Abraham’s reaction in the story of the binding of Isaac. In Genesis 22, God commands Abraham to offer his son, no less than 50 percent of his offspring, as a sacrifice. Abraham accepts God’s command – with no verbal response. His silence is deafening. This is the same person who a few chapters earlier determinedly protested God’s judgment to destroy even the evil inhabitants of Sodom! Yet here he raises no objection – not even asking, “What about your earlier promise that my descendants will be as numerous as the stars and sand?” Not even questioning the apparent command to kill, in direct contravention of the already extant Noahide law, “Do not kill”?

Abraham’s behavior is atypical, yet he remains silent. He travels until he sees God’s presence at the site of the future Temple. And then, as he wields his knife and is about to slaughter his bound son, Isaac, on the altar, God commands him to halt in his tracks (a ram is offered instead). Abraham was commanded, he dutifully listened, and Isaac was spared. The patriarch names the place, “Adonai-Yireh,” meaning “the Mount where God is seen.”

The significance of this event occurring on the site of the future Temple is that it foreshadows the role of the sacrifices in that very same location. The animal takes the place of the human – first replacing Isaac, and then always. The location is consecrated for future generations.

Similarly, the two sons of Aaron, 50% of his offspring, choose to offer a sacrifice but — in this instance – they had not been commanded to do so by God. The intention of the Mishkan and its sacrifices is “that God’s glory may be revealed to you.” Yet Aaron’s sons inappropriately took “a container of incense” and offered a strange fire before God. They die as a result, and in the aftermath, Aaron remains silent.

The presence of God was seen by all before Nadav and Avihu were killed. This sacrifice is made as part of the consecration of the Mishkan, the traveling Temple of God. But in contrast to Abraham and Isaac, absent God’s initial command, Aaron’s sons were not spared.

Why weren’t they, though? Rabbenu Bachya suggests that they freely brought their sacrifice in the Holy of Holies, the place that only the high priest is allowed to enter once a year. They should not have been there.

The entire concept of the korbanot – sacrifices — is rooted in the binding of Isaac; these narratives are inextricably, if unexpectedly, linked. As a lesser example of this connection, note that the dedication ceremony of the Mishkan, whose chief function was the offering of sacrifices, was in Nisan because Isaac was born in that month.

Yet the binding of Isaac teaches that human sacrifice is repugnant, despite what may appear to be the opposite. That is, lest one think that the highest form of giving to God means sacrificing that which is most dear, the text in the Book of Jeremiah unequivocally disagrees. That is, God makes the point explicit, declaring: “They built the high places of Baal to burn their children with fire as burnt offerings to Baal, which I did not command, neither did I speak nor did it enter My mind.”

The Mishkan, the place for the commanded worship, presents the opportunity for humanity to approach and experience God. This intimate relationship must have boundaries and limits. Nadav and Avihu ignored the rules, did what they presumed to be an appropriate expression of faith and were consumed. Thus, conferring what appears to be noble, reasonable, and appropriate religious acts with the stamp of authenticity is a risky enterprise when doing so goes beyond the parameters of God’s command.