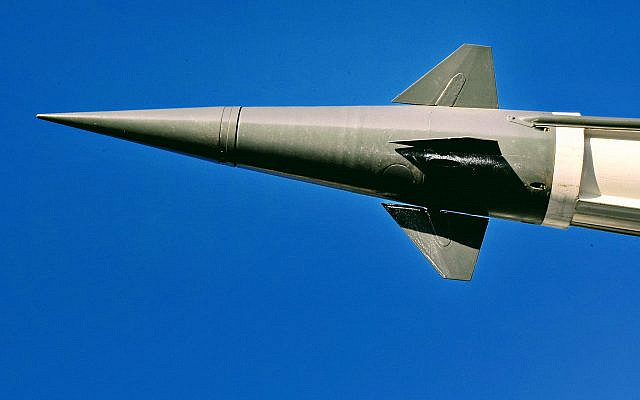 In the last couple of weeks, as Russia backtracked from recent threats to use nuclear weapons in Ukraine, Iran acknowledged supplying Russia with thousands of deadly kamikaze drones that are being used against Ukraine’s critical infrastructure in an effort to turn the war in their favor.

However, maybe even more important than Iran giving Russia deadly drones is what Iran is getting in return from Russia.

This week, Iran announced that it possesses hypersonic missiles. What a coincidence!

Given that Iran has been under heavy U.S. and international sanctions for decades, that their economy is in shambles, and that their regime is under siege from ongoing protests from their people that are seeking freedom, it seems highly implausible that Iran achieved this advanced missile capability on their own. More likely, Russia, which has been testing, touting, and deploying its advanced hypersonic missiles, has given or helped Iran with this most sought after capability.

Why would Iran want hypersonic missiles from Russia?

Iran, which has been threatening to destroy Israel and attack the West, knows that at a certain point, Israel and the U.S. will likely need to preemptively attack Iran’s nuclear sites. Since the U.S. and Israel have been developing advanced missile defenses for many years together, Iran needs the hypersonic missiles as a threat to Israel and the U.S. acting against Iran’s weapons of mass destruction. That is why Iran’s commander of the Revolutionary Guard came out this week, stating:

It will be able to breach all the systems of anti-missile defense.

He also said that no technology will be able to stop their hypersonic missiles for decades to come.

Additionally, we learned this week that Iran is further defying the West by seeking Russia’s help to further build out its nuclear weapons capabilities. Iran’s possession of nuclear weapons to threaten and attack Israel and the West and hypersonic missiles to stop any preemptive action against them is a powerful and scary combination that puts Middle Eastern peace at risk more than ever before.

Adding to this deadly scenario, menacing and nuclear-armed North Korea has apparently also joined this axis of evil and is supplying Russia with munitions for its war in Ukraine. Moreover, China, in its endless endeavor to take over Taiwan by force, if necessary, is strengthening its alliance with Russia as well and has conducted joint military maneuvers to prepare for what may come.

These four countries have in common the wish to counter and perhaps overthrow what they consider Western hegemony and what is to us an expanding modern-day civilization of democracy, capitalism, freedom, and human rights in the world. While Russia is losing steam and ground in Ukraine, make no mistake that Russia, along with China, Iran, and North Korea, are determined to not only stop but also throw back what they perceive as western imperialism. Instead, they only see more dictatorship and the strengthening of their own authoritarian systems.

With a few hundred thousand dead between Ukrainian and Russian forces so far, this may only be the beginning of a much bigger conflict that will come to a head soon. As Navy Admiral Charles Richard, Commander of U.S. Strategic Command, said this last week:

This Ukraine crisis that we’re in right now, this is just the warmup. The big one is coming.

Will we be ready for a global showdown of democracy vs. tyranny? And at what cost will we be required to pay in blood and treasure? Freedom isn’t free, but World War III, with all the weapons of mass destruction now available, also comes at an incomprehensible cost.

While the hype in the news has been all about the proliferation of nuclear weapons, missiles, and drones, perhaps the real story is that we are moving at hypersonic speeds to a most dangerous global showdown between East and West. Blessed be the Holy One who is bringing us to a hopefully merciful final redemption.