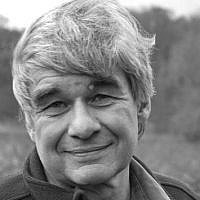 The Blogs
Matthias Kuntzel
Apply for a Blog
Please note that the posts on The Blogs are contributed by third parties. The opinions, facts and any media content in them are presented solely by the authors, and neither The Times of Israel nor its partners assume any responsibility for them. Please contact us in case of abuse. In case of abuse,
Report this post.

Last week I attended a discussion with Iran’s Foreign Minister Mohammed Javed Zarif and witnessed his ability to mesmerise his listeners. The event took place at the German Council of Foreign Affairs in Berlin.

Mr. Zarif succeeded in dazzling his audience – about 250 foreign policy experts — with commonplace sentences such as: “global security is indivisible”, “dialogue is necessary” or “war is not a good option.” He came across as an Iranian Gorbachev, a good-hearted reformer defying the powers of darkness.

Yet a few days earlier he had bowed his head before the grave of a particularly sinister figure — Hezbollah commander Imad Mughniyeh who was not only responsible for the 1983 suicide bombing that killed 241 U.S. soldiers in their barracks building in Beirut, but is also considered the “inventor” of Islamist suicide bombing.

This was not mentioned in Berlin. Zarif presented his country instead as “a status quo power” and an island of moderation within a sea of extremist violence. “We do not support terrorists,” he claimed with a mischievous smile. “We do not fund them.” “We will never start a military operation against anyone.” The audience hung on Zarif’s lips, nobody laughed. The fact, that Iran’s Revolutionary Guards interfere in Iraq and Lebanon and recruit and instruct Shiites from all over the world to conduct military operations in support of Assad was obviously forgotten.

The Berlin audience preferred to believe what Zarif claimed. It willingly surrendered to Zarif’s smile and sonorous bass and rewarded him with applause.

“You have built up today a lot of trust,” stated Paul Freiherr von Maltzahn, the Secretary General of the German Council of Foreign Affairs in his closing words of thanks.

This atmosphere of trust was strengthened not only by the German but also the Israeli media. My first example deals with the Holocaust. Consider this remarkable disclaimer, published by Fars News the other day: “Some Israeli media … have misquoted the Iranian foreign minister as saying that the Holocaust should not happen again’”. Regrettably, the Iranian news service was right.

In an interview with the German TV station Phoenix, Zarif avoided mentioning  the Holocaust, the Shoah or the murder of Jews. He instead referred in general terms to “a horrifying tragedy” “which should never occur again.” Nobody knows if he meant the Holocaust or not. Media in Germany and elsewhere, however, produced headlines such as: “Iran calls Holocaust a horrifying tragedy” – headlines that were more an expression of wishful thinking than a reflection of what the Foreign Minister actually said.

The Phoenix interview was conducted and broadcast in English. Nevertheless, another “misunderstanding” occurred. On February 3, the Times of Israel published an article with the headline “Iran FM: We may recognize Israel after Palestinian deal” and quoted a remark made by Mr. Zarif in the Phoenix interview: “After the problem with the Palestinians is resolved, the conditions that will enable recognition of the State of Israel will be established.” Though ToI deleted this sentence shortly after publication, it spread like wildfire.

The alleged quote was repeated on Feb 4 Algemeiner and Al-monitor. Al-Monitor acknowledged the same day that a “mistranslation” had happened. That did not prevent the New York Times from quoting the sensational news again on Feb 6, combined with the advice of a pundit who considered “Mr. Zarif’s remarks about an Iranian decision regarding relations with Israel” as “a first in itself” and as “unprecedented.”

The catch is that these words were never spoken, as the Phoenix video reveals.

Here are the words of the interview that so many misunderstood:

Phoenix TV: If the Palestinian question can be solved between Israel and the Palestinians, would then Iran be willing to recognize the state of Israel?

Zarif: You see, that is a sovereign decision that Iran will make. But it will have no consequences on the situation on the ground in the Middle East. If the Palestinians are happy with the solution, then nobody, nobody outside Palestine, could prevent that from taking place.

The ToI still summarizes this exchange as follows: “Zarif said recognition would be a sovereign decision that Iran would make.’” The foreign minister, however, did not mention a “recognition of the state of Israel”. On the contrary, he tried to evade the clear-cut question of the interviewer. It thus remained unclear which “sovereign decision” and which “solution” he meant.

The West seems intent on betraying itself. True, everybody yearns for Iran to become a “normal” country; a country that not only changes the style but also the substance of  its policy. While this longing is more than understandable it mustn’t be allowed to deafen our sensory organs and mind. That, however, is what is happening. Invented messages circulate and are uncritically trusted as long as they confirm the spirit of hope. Real stories remain unheeded as long as they might disturb the optimism.

Nobody seems to notice, for example, that Zarif threatens to acquire nuclear weapons again and again. “The only way you can ensure that Iran’s nuclear program remains peaceful is by allowing it to take place in an acceptable, peaceful international environment”, he insisted back in September 2013. He repeated the message frequently during his visit in Germany, including to the Frankfurter Allgemeine Zeitung.

Question: “How do you want to refute the fear that Iran might build the atomic bomb some day?”

Answer: “You should create a situation that makes it logical and beneficial for Iran to remain a part of the system and to not abandon the Nonproliferation Treaty.”

The Iranian threat to acquire nuclear weapons and to leave the Nonproliferation Treaty contradicts the Geneva Agreement of November 24, 2013, which in its opening sentences states that “Iran reaffirms that under no circumstances will Iran ever seek or develop any nuclear weapons.”

Only two groups took this attempted blackmail seriously: the German Stop the Bomb Campaign and the Mujahedin-e Khalq, a longtime Iranian opposition movement. Anyone who wanted to attend the discussion with Zarif at the German Council of Foreign Affairs had to first get past their quite vociferous rally against Zarif and his regime.

About the Author
Dr. Matthias Küntzel is a political scientist in Hamburg, Germany and a member of the German Council of Foreign Affairs. He is an external Research Associate of the Vidal Sassoon International Center for the Study of Antisemitism at the Hebrew-University of Jerusalem and the author most recently of Germany and the Bomb and The Germans and Iran. Past and Present of a fateful friendship and of Iran (forthcoming in English by Telos Press, New York). His essays on Islamism, Antisemitism and Iran have been published inter alia in The Wall Street Journal, The New Republic, and Die ZEIT, and have been translated into ten languages.
Related Topics
Related Posts
Comments