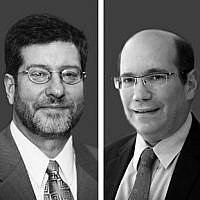 The Blogs
Martin J. Raffel and Gil Troy
Apply for a Blog
Please note that the posts on The Blogs are contributed by third parties. The opinions, facts and any media content in them are presented solely by the authors, and neither The Times of Israel nor its partners assume any responsibility for them. Please contact us in case of abuse. In case of abuse,
Report this post.

The world is a strange place. The United States threatens to punish Syria for gassing its own citizens – and the Syrians and Iranians threaten the “Zionist regime.” Similarly, as Egypt staggers toward civil war – both sides blame the “Zionists” and the Americans. We are all traumatized by living with this constant delegitimization of Zionism. The blame game preys on the Jewish culture of guilt – leading too many Jews to forget Zionism’s defining ideals and mission.

Israel’s centrality to Judaism begins with the Bible, which developed a Jewish religion, a sense of solidarity, and a Jewish narrative rooted in the Land of Israel, the Promised Land. Great collective Jewish enterprises such as the Holy Temple and the great kingdoms, along with Jewish heroes like King Da­vid, King Solomon, the Prophetess Deborah and the Maccabees, illustrate the ongoing, Biblical and post-Biblical Israel connection. The fact that even when the majority of Jews did not live in Israel – and there was always a Jewish presence there, especially in the four “holy cities” of Jerusalem, Safed, Tiberias, and Hebron — they prayed toward Jerusalem, and called themselves in “exile,” reflects the land’s continuing centrality. Today, so many Jewish holidays, values and laws remain tied to the land, uniting Juda­ism, the Jewish people and the Jewish homeland, Israel.

The stories of both liberal democracy and Zionism are intertwined with that great, defining, sometimes ennobling, and yes, sometimes cruel, but absolutely defining modern movement – nationalism.  The founder of modern Zionism, Theodor Herzl, harmonized these three intellectual currents. This enlightened Viennese progressive is best remembered for jumpstarting Zionism in reaction to the anti-Sem­itism of the Dreyfus trial. Yet in his 1896 book “The Jewish State,” Herzl dreamed of the Jewish state as a liberal model. “We shall live at last as free people on our own soil, and in our own homes peace­fully die,” Herzl wrote. “The world will be liberated by our freedom, enriched by our wealth, magnified by our greatness. And whatever we attempt there for our own benefit will redound mightily and beneficially to the good of all humanity.”

Herzl’s essential Zionist message still holds true – and most Western liberal nationalist echo it: only through self-determination can utopian ideals be achieved; a community first must unite and protect itself before helping others. Nationalism trusts the community as the best structure for implementing high ideals – some­times out of broad conviction, sometimes out of sad necessity.

The debate about how to balance universalism and particularism persists. But, perversely, the same anti-Zionist forces celebrating Palestinian nationalism often negate Zionism. We need mutual respect for each people’s collective sense of self.  Today, when the United Nations reflects the fact that nationalism shapes most countries, it is unjust to single out Jewish nationalism, mean­ing Zionism, as the only illegitimate form of nationalism – or as somehow more exclusionary than others.

Zionism began as a bold experiment to save the Jews while finding the perfect ideological mix of Judaism, nationalism, liberalism, idealism, rationalism, socialism, and capitalism.  The early Zionists were idealists and pragmatists, who believed that “you and I can change the world” – but first let’s build our state.

Israel’s proclamation of independence from 1948 also illustrates the dream of building a happy marriage between Zionism and liberal democracy in the land of Israel, offering a model of how nationalism can be constructive globally. In rooting this new country in the Bible but offering “all its inhabitants” equal civil rights, David Ben-Gurion ping-ponged from universalism to particularism, demonstrating how intertwined the two concepts were, and how expansive, ambitious and progressive the Zionist dream could be.

Of course, no nation is perfect – or able to fulfill all its ideals all the time. Israelis acknowledge they are still pushing for the State to fulfill its highest ideals. The Zionist project — like all great nationalist projects — remains a work in progress. Still, Zionism’s legitimacy should be respected and its accomplishments hailed – while condemning those who choose to scapegoat Zionism today, just as anti-Semites traditionally scapegoated Jews.

What’s YOUR take on this?

How do you define Zionism? Do you consider yourself a Zionist? What kind of Zionist are you?

Add your comments below!

This post is one in a series of responses to common challenges to Israel’s legitimacy as a Jewish and democratic state.

About the Author
Martin J. Raffel is the senior vice president of the Jewish Council for Public Affairs (JCPA), where he has served as the lead professional on Israel, world Jewry and international human rights for the past twenty-five years. He also holds the position of project director for the Israel Action Network, a joint project of The Jewish Federations of North America in partnership with the JCPA, created to counter assaults made on Israel’s legitimacy; Gil Troy is a professor of history at McGill University. His latest book "Moynihan's Moment: America's Fight Against Zionism as Racism" was just published.
Related Topics
Related Posts
Comments