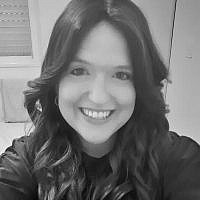 The Blogs
Tzivi Nochenson
An Orthodox Millennial Mom in Israel
Apply for a Blog
Please note that the posts on The Blogs are contributed by third parties. The opinions, facts and any media content in them are presented solely by the authors, and neither The Times of Israel nor its partners assume any responsibility for them. Please contact us in case of abuse. In case of abuse,
Report this post. 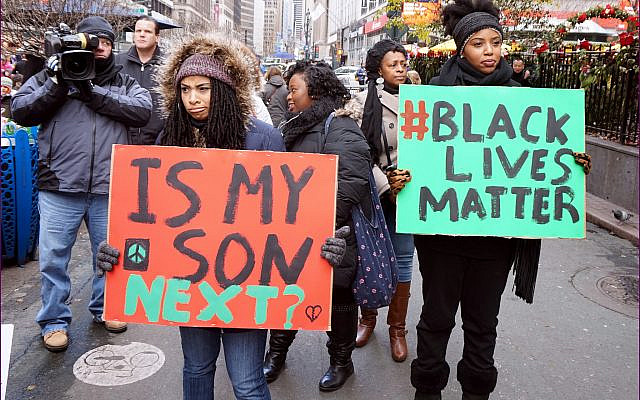 It is not a question up for debate. There is a major upheaval going on in America right now. And rightfully so, because systematic racism and police brutality towards the Black community is a real thing. There is no question that deep down, even the people who are posting non stop on social media about George Floyd’s death and the events following, have been a product of the racial construct in America. In fact, up until now, many of them did not even know about white privilege or the cruel behavior towards people of the Black community from law enforcement. The call for change in America is desperately needed. No one is denying that. However, as an American Jew who now calls Israel her home, I do have to question the mass support of Black Lives Matter. Before you call me a racist and narrow-minded, keep reading.

Black Lives Matter shouts an incredibly important message to people everywhere. Black lives matter, they are important and their lives should not be taken in vain because of racist structures and law enforcement in America. They believe the Black community should no longer be oppressed by the systems in place, and rather they should be able to thrive in their country. There should be legislation in place that ends racism and they are trying to advocate with the Black community’s best interest at heart. Now, who could actually have a problem with this message? It is not only an important message, but 100% needed in America.

Unfortunately, that message comes with many others, that not only I am uncomfortable with, but go against everything I stand for. I have been told to suck it up, to support the movement even though I do not agree with who they associate themselves with and that in fact, if I do not do so, I am a racist too. One person even called me a conspiracy theorist.

Make no mistake, I am not a conspiracy theorist. However, I do know that the Movement for Black Lives (a coalition of over 150 Black groups, including major foundational support of Black Lives Matters) platform includes jarringly offensive language and policy towards Israel. After a quick search, I was able to find the full platform on their website. In the section about investing and divesting funds I found multiple problematic statements about Israel. One profoundly problematic statement included:

“The US justifies and advances the global war on terror via its alliance with Israel and is complicit in the genocide taking place against the Palestinian people.”

The platform also included a link to the BDS movement website, a notably Anti-Israel, Anti-Zionist and Anti-Semitic movement, decried by hundreds of thousands of people across the globe. It further includes a link to Black/Palestinian Solidarity, a website that so notably describes the events of the Summer of 2014.

“During the summer of 2014, state-sanctioned racialized violence was on full display by the United States and Israel. For 51 days, Israel used sophisticated weapons technology with precision-targeting capability to kill 2,200 Palestinians, including 535 children, to demolish or damage 140,000 homes, to destroy 319 businesses, 36 fishing boats, and 42,000 acres of agricultural land, and to target critical civilian infrastructure, including Gaza’s sole power plant.”

The website neglected to mention the events leading up to this violence. It did not mention three innocent boys kidnapped and killed by Palestinian terrorists; who dressed up as Religious Jews in order to trick them into their car. It did not mention the hundreds of rockets that rained down on Israeli citizens that summer from Gaza. It failed to mention the millions of Israelis who spent hours upon hours a day in bomb shelters, traumatizing adults and children alike. It additionally failed to mention the numerous tunnels the government found in Gaza leading into Israel, and the foiled major terrorist attack planned for Rosh Hashanah of that year. They neglected to mention that the Palestinian leadership uses its people as human shields, launching rockets from civilian areas.

Last but certainly not least, The Movement for Black Lives (which means that Black Lives Matter by default does too) wrote that it partners itself with The U.S. Campaign to End Occupation. Upon googling this organization, I found it has renamed itself U.S. Campaign for Palestinian Rights (excellent PR move on their part), and as expected the website is a breeding ground for Anti-Israel rhetoric and propaganda. Their website includes an entire portion dedicated to ending “Apartheid Tourism” including that universities should not support study abroad programs in Israel and to decry the popular and well-known program, Birthright.

How many people on my social media channels posting about the movement did either or both of those things? I am almost positive they have no idea that Black Lives Matters aligns with this massive movement, that is filled with anti-Israel hate speech.

Now that I have laid it all out there for you, if you consider yourself a Pro-Israel person, do you have issues with that? I will not go into the nitty gritty details of why this language is so problematic. I will tell you though that language such as genocide, apartheid, BDS and radicalized violence, all aim to do one thing, take away legitimacy from the existence of Israel. So as a Pro-Israel person who wants to be on the right side of history, but feels overwhelmingly uncomfortable with the Black Lives Matter partnership and resources, what am I supposed to do?

People have told me, it does not matter if this Anti-Israel stance exists. Black Lives Matter is not about that, and right now we need to put all other issues aside and focus on that. I can agree with the latter, but definitely not the former. It is clear that their leadership has chose to partner with a pretty Anti-Israel movement. However, they are right, it is not the time to solely focus on these issues when there are bigger fish to fry in the Black communities.

Yet, as a person who feels they are a “truth seeker” I am dumbfounded. I do not know how to support Black Lives Matter without feeling like I am turning my back on the much needed Pro-Israel movement and advocacy. I used to spend my free time in college advocating for the right for Israel to exist and I even worked in one of the most notable charities for growth in Israel.

I have to ask my Black Lives Matter supporting friends who came on Birthright, came for seminary or yeshiva, vacation to Israel and enjoy their Cafe Rimon, why are you not uncomfortable with this? If you are actively supporting this movement, why are you not speaking to members of Black Lives Matter about these problematic partnerships? Why are you so blatantly ignoring a major issue with their choices? It does not make sense. Can you imagine if a Pro-Israel group partnered with an organization that completely discredited the Black narrative of America? Think about that.

It is okay to say racism is a serious issue in America. It is okay to take a stand against police officers beating peaceful protesters with batons, launching tear gas and shooting rubber bullets. No one is arguing that. What am I asking, is how all of the sudden can you completely ignore the Anti-Israel sentiment and partnership of Black Lives Matter? How can you call yourself an intellectually honest person and tell people who question that issue to basically sit down and shut up?

As of now, the focus should be on making sure the Black community is heard within the coming days, weeks and months. Although, when the dust starts to settle it is time for the Pro-Israel community to have a serious dialogue with the leadership of Black Lives Matter. It is unacceptable for an organization that is dedicated towards the empowerment and betterment of Black lives to include partnerships that spew hatred towards Israel.

So where do I stand now? Where do others stand who share these feelings? I stand Pro-Israel and Pro bettering the lives of the Black Community. I stand against systematic police brutality towards people of color. I stand against officers that stand on a man’s neck for 8 minutes and 46 seconds. However, I question the rhetoric and partnerships. I have serious issues with them and I hope others can see those issues as well.

It is our duty in the Pro-Israel community to open up the lines of communication. To stand up and say “hey we support you, but we need to talk.” It is not okay to sheepishly back down from our beliefs because we are afraid of what that looks like. The Black community needs their moment to bring down the system. Once they have accomplished their goal, it is time for the Pro-Israel leadership to have a serious conversation with them. They need to discuss with them what it means to partner with those organizations and what it means to use such language in their platform. It is not okay and they should not get a free pass, no matter how important the work they are doing accomplishes.

Of course, Black lives matter. I will continue to believe that and support that. I am willing to put aside my differences today, so that Black community can have a brighter tomorrow. However, when tomorrow comes it is time for everyone who is Pro-Israel to strike up a conversation with Black Lives Matter. It is time we end their support of groups that demonize Israel.

I hope and pray that in the near future, that the Black community attains the justice and progress they desperately need. In addition, I hope and pray the Pro-Israel community builds a bridge and together, we put an end to the Anti-Israel rhetoric they currently support. One day, one person and one conversation at a time.

About the Author
Tzivi Nochenson is a wife, mother and proud Olah Chadasha. She balances the unique role of a returnee to Torah Judaism and a modern day millennial woman. She is currently pursuing a dual masters degree in Early Childhood Education and Special Education. Tzivi lives with her wonderful husband and rambunctious children in Ramat Beit Shemesh.
Related Topics
Related Posts
Comments