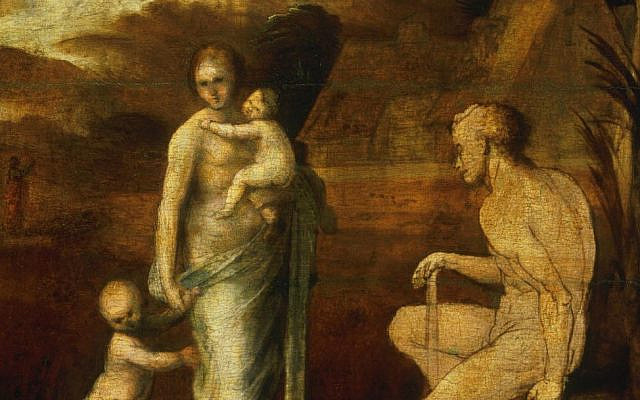 I am a woman, human, living creature on Planet Earth.

I was created in the image of G-d, descended from the first human: “Male and female, He created them” (Genesis 1:27).

I have a name, I have a family, I know where on this earth I live. I have community and purpose. I have benefited from those who went before me but I still have things to do, and there are causes to support and values to uphold.

I do not take for granted that I understand all of this.

Imagine Chava (Eve), the first woman. There is so much we do not know about her.

When the Creator speaks to Adam and tells him about his surroundings, does she hear, too? Or is her world silent until she is separated from the man?

Imagine her opening her eyes for the first time separated from Adam.

Perhaps prior to the separation, she had no conscious experience.

She sees a man alongside her — a being like her but not identical to her. There is no shame or feeling of inadequacy from either of them, although in their nakedness, their differences are visible (Genesis 2:25). He feels that they belong together and wants to cling to her. He calls her “Woman,” saying that she has come from him. Possibly, he tells her the rules for their life in the Garden of Eden. He indicates that her job is to help him.

It appears that the woman is not so certain. She needs to explore her environment in order to know who she is and what her purpose is. She is not with him when she encounters another creature, the snake, who addresses her. In fact, this is the first time someone directly addresses her. The man speaks of her in the third person, but the snake speaks directly to her. He challenges her to question the rules (Genesis 3:1).

For the first time, a human being is not directed by the Almighty, and has to make up her own mind and have an opinion. The forbidden fruit looks good. Until this point, the Creator has declared what is good and what is not good. Now, a person sees something as “good” (Genesis 3:6). “Good” ceases to be an objective reality, but a matter of perception. She is curious as to how the fruit might taste and what it might do to her. She does something radical: she imagines. The woman responds to her thoughts and feelings. She takes a bite.

She gives fruit to the man, too. Whether he hesitated, we don’t know. When G-d asks him to explain himself, he blames the woman. She, in turn, takes her cue from him and blames the snake (Genesis 3:13).

When punishment is meted out, a radical idea is suggested: the woman will bear children. It will be painful. For the man, this changes the way he sees woman: it becomes her prominent identity and he renames her “Chava” (Eve), bringer of life (Genesis 3:20).

She does bear children. She names them according to her experience and feelings: “Cain”/Kayin (I have acquired a child) (Genesis 4:1); “Abel”/Hevel (breath, intangible, fleeting). When her first-born kills her second child, she experiences not only birth, but also death, not only acquisition, but loss. The implications of her role as giver-of-life take on a new meaning now that there is also end-of-life. She calls another son “Seth” (compensation) (Genesis 4:25) — but can one child ever compensate for the loss of another?

She has more children and they bear children who bear children. She fulfils her role as giver-of-life, but midrashim differ on whether, when, and how her own life came to an end.

We know so little about Chava, the mother of us all. Prior to becoming a mother, she has opinions and she acts on them, and after she becomes a mother, her progeny is the only thing recorded about her.

Is that the true meaning of Chava’s punishment for eating from the forbidden fruit? “In pain you shall bring forth children and your desire shall be for your husband and he will rule over you” (Genesis 3:16).

Perhaps the true pain of motherhood for Chava was not labor pains, but what followed from motherhood. Is it possible that once she became a mother, her opinions and her emotions were subsumed by her children? Perhaps instead of having time to look at the desirable fruit and other temptations of life, as well as the beauty and wonder of creation, she only saw her husband.

Motherhood is not a curse; it is a blessing. However, there is always the danger that it will subsume our identities and limit our engagement with the world.

The story of the first woman is potentially the story of every woman.

The Torah records many curses. In every case, a curse is something to be avoided and overcome. That includes the curse that bringing forth children needs to be painful. We have had the remedies to overcome labor pains for some time, but what of the remedies to prevent a woman falling into obscurity once she takes on the role of wife and mother?

Every woman inherits Chava’s qualities of curiosity, imagination and bravery. Let’s make sure they are not repressed.

Women living today have two advantages that previous generations did not: a long life-span, meaning that we have lots of life after our child-bearing and child-rearing years, and access to education. Together, these advantages mean that we can overcome the curse of the first woman.

We can apply our curiosity and imagination. We can become who we want to be and not only be what others label us.