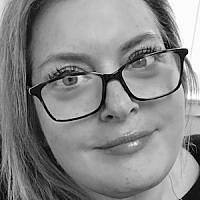 My mistrust of the Trump administration is not something I have been quiet about (see my “50 Shades of Trump” in The Hill, or “A Jewish Mother Takes Trump to Task” in The Forward, or any number of posts here.) At AIPAC’s 2018 conference, I heard a lot of applause and congratulations for Trump confirming Jerusalem as the capital of Israel and planning an embassy there.  Like anything else with Trump, my approval tends to be qualified – will this actually happen or is it like the much heralded and happily as yet unbuilt wall? Will it spur a reaction that kills people I love? Hmmmm.  So sure, name train stations after him and make a golden Trump statue while you’re at it, but with this film flam artist I don’t clap for anything until it’s done and done safely. And paid for – preferably not with human lives.

I went to AIPAC’s 2018 conference with some degree of trepidation but a great deal of joy.  Hoping that the silver lining of this otherwise soul-destroying administration will be this true commitment to Israel, and hoping that the bipartisan Israel agenda AIPAC espouses, reaching out to progressives and joining across party lines to support Israel, could blot out some of the more odious positions of some of its speakers.

I heard repeatedly at AIPAC that support for Israel comes from both parties, and that we have to appreciate candidates’ support for Israel and not dismiss them for their other viewpoints. Progressives were specifically welcomed by AIPAC’s new president, Mort Fridman, a psychiatrist whose very presence seemed able to soothe differing viewpoints among over 18,000 people.  The strategic importance of bipartisan support was noted by speakers like Avi Gabbay, head of Israel’s Labor party, who looked to a new Israeli government free of corruption in a way that sparked understanding of American/Israeli parallels and vision.  It seemed consistently reinforced that no candidate will ever exactly approximate personal perspectives, but we are joined by this love of and support for Israel.

There were beautiful, unifying moments, the transcendency of music and history, celebrating Israeli innovation and culture, hearing from people who are doing heroic and incredible things. It was wonderful to be among thousands and thousands of Jews of all ages joined, across party lines, by a love of Israel – and by a lot of Jewish geography and, just glancing around, some pretty strong genes. Seeing people from many walks of life, including a friend from junior high school, meeting new people… I met really impressive college students (and gave some my daughter’s phone number). I met speakers I consider heroes.

I was on a big Jewish “I can do this bi(partisan) thing, it’s just more people to love” high.

Which was fine until… I don’t know.  Was it when Mike Pence seemed to accidentally proclaim Trump “the most pro-life” president – before clarifying “the most pro-Israel”?  I admit that after that, when he started to preach about Israel, I was secretly hoping for a “Jesus” to slip out, too – just to see the reaction.

And then along came Mitch McConnell, using the podium to take a jab at the previous administration. A sucker punch that left me feeling a little disgusted for experimenting with being bipartisan at all. The quick one-two of Marco Rubio and Mitch McConnell made focusing solely on Israel a challenge – there was too much history there to ignore. As I looked around the room and noted who was nodding, who was cheering vociferously, who was giving a standing ovation, I suddenly remembered who donated to Trump and helped put him in office and apparently support that administration still, and bam! Any attraction I had to being part of a bipartisan group ended, my convention-long flirtation plummeting to a close.

Pence, Rubio, McConnell… these people stand with Israel. I so appreciate their allegiance to Israel, and I will proudly stand alongside them. But I will never stand with them. Maybe whether we work together or we work as one is a semantic difference, but is meaningful to me.

I know which team I play for, and that it’s not a team that allows for their actions and ethics, or those of the current administration. Given their loyalty to an erratic and unstable president, I can’t unquestionably trust their allegiance either.

I do not and will not see these the actions of the current administration as congruent with the Jewish values that my love of Israel is part and parcel of.  My dalliance with being bipartisan led me right back home to the progressive politics that feel real and right to me, that mesh with the Torah teachings and family ethics I can’t walk away from, and that my love of Israel comes from. To throw over the moral principles of Judaism for strategic support of Israel will never make sense to me.

But I have hope. When I came back to the hotel from the second day of the conference, I saw station after station showing Sam Nunberg and I realized that AIPAC 2019 could be markedly different. Investigations, indictments – both country’s leaders have a lot going on.

Could Sam Nunberg be speaking at AIPAC 2019, recounting his sideline view? I imagined Eric Schneiderman, the New York State Attorney General, as a speaker, credited with state level investigations immune from federal pardon. A panel with Rod Rosenstein?

I envisioned rooms filled with those of every political orientation sharing bipartisan Jewish and Zionist values: willing to forego a tax return hike to fight for health care for all and to help those in need, unwilling to accept tacit approval of anti-semitism – working tirelessly together to strengthen the US alliance with and allegiance to Israel.  I hope AIPAC 2019 celebrates standing up to Russia and foreign influence to protect Israel as a democratic ally and as a living embodiment of strength and Jewish values, and showing the UN and the world the best of what Israel and American Jews stand for.

About the Author
Judi Zirin is an attorney and freelance writer in the New York area.
Related Topics
Related Posts
Judi Zirin
Comments