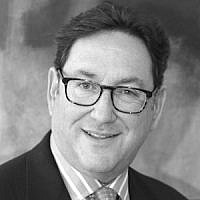 The Blogs
Michael Whitman
Apply for a Blog
Please note that the posts on The Blogs are contributed by third parties. The opinions, facts and any media content in them are presented solely by the authors, and neither The Times of Israel nor its partners assume any responsibility for them. Please contact us in case of abuse. In case of abuse,
Report this post.

This year is a Shmita (Sabbatical) year in Israel. As described in Parshat Behar, farmers in Israel do not plant or do most work in their fields, and whatever grows on its own is to be freely shared by everyone.

This Mitzvah is not just a system for providing more resources for the poor. Our rabbis point out that a farmer cannot simply say, “I will harvest my crop, bring it in to my storehouse, and distribute more to the poor.” Rather, the farmer must unlock the gates to his field so that during this year he is not considered an owner. Because during this year we are all required to remember what God tells us in this Torah portion, “Ki Li HaAretz – the land is Mine.”

Rabbi Avraham Yitzchak Kook writes: “This nation has a special need that from time to time (every seven years) its Divine light must reveal itself in its full splendor, so that the mundane life of society with its burdens and worries not extinguish it…so that the purity of its soul in its entirety be able to reveal itself within it.”

Rabbi Aharon Lichtenstein writes: “We can view Shmita as attempting to create an ideal society. In the society of the Shmita year, equality reigns, produce has no owners, there is no employer and employee, but rather all share the same status. Such a society acquires new and revolutionary qualities that can change the nature of that society…” (Please see “The Conceptual Foundations of Shmita” based on a lecture by Rabbi Lichtenstein, for these sources and a magnificent, fuller treatment of this subject.)

Rabbi Aharon Lichtenstein has written a classic essay on Shmita in our time (and I urge you to download and read the full essay here). He argues that in modern times, with the transition from an agricultural economy to an industrial economy, Shmita is only directly applicable to a small fraction of Israeli society – its farmers. And of those farmers, most rely on the Heter Mechirah (the selling of the Land of Israel to a non-Jew for the Shmita year so that the restrictions and prohibitions are removed).

Even assuming that this sale is valid (which is a complicated and controversial issue among Halachic authorities), and even assuming there is no better solution that is feasible to remain in compliance with Shmita laws today (which is also a complicated and controversial issue among Halachic authorities), we are left with a Halachic tragedy, in that our compliance comes exclusively from avoiding Shmita. With the Heter Mechirah, life proceeds like last year and next year. None of the magnificent benefits and societal goals remain. God’s vision in commanding this Mitzvah – perfecting society, striving toward equality, the revelation of the Divine light in its full splendor – is lost to us. And the tragedy is there is no solution in sight.

Let me share an analogy. We confront questions about how to observe Shabbat properly, especially with new technological innovations. What if someone, faced with a difficult question of how to observe Shabbat properly suggested the following solution: on Friday afternoon, take a pill that will cause you to sleep for 25 hours. When you wake up, Shabbat is over. There will be no Shabbat violation. We will insure complete Shabbat compliance. But is that a solution? What about the benefits Shabbat is meant to convey? What about the spiritual and emotional rest, the beauty of celebrating with family and friends, the inspiration of gathering as a community for prayer and Torah study? Would anyone suggest that? But that is, in essence, the tragedy of Shmita today. And at the very least, says Rabbi Lichtenstein, we should feel badly about it, and try to realize what we are missing.

THE POLITICS OF SHMITA

The Halachic controversy concerning the Heter Mechirah relates to questioning the validity, effectiveness, and permissibility of selling the Land of Israel. But what about crops grown on land that actually belongs to non-Jews?

At this point many will say – DON’T EVEN THINK ABOUT IT! Among them would be David Weinberg, who wrote an essay in the Jerusalem Post this past September (here). He points out that some Chareidi Jews in Israel “get through the Shmita year primarily by buying Arab-grown produce…This (past) summer the various (Chareidi Kashrut organizations) have been busy signing produce-supply contracts with Palestinian Authority farmers.”

And he adds, “This infuriates me. Primary reliance on Arab produce is neither realistic nor acceptable for health, nationalistic, and religious reasons.”

The health issue is Weinberg’s claim that Jews who use Arab produce suffer a higher rate of hepatitis resulting from Arab farmers’ use of untreated sewage water. But the Israeli Ministry of Health denies this, and the Israeli Civil Administration wrote: “There is no trace of truth in the claims that the agricultural goods caused diseases in Israel.” (For these quotes, and the quotes in the next section, see “Farm to Table Across the Green Line” here.)

Let’s leave for now Weinberg’s religious reasons. Suffice it to say there is Halachic controversy about this, though most authorities would concede there are fewer Halachic problems with this than with the Heter Mechirah.

But the nationalistic problems are obvious. Support Hamas? The Palestinian Authority? Terrorists? Enemies? Give them market share at the expense of Israeli farmers? Especially keeping in mind that with today’s global economy, if market share is lost in any one year, the loss can be permanent. To even consider that is crazy! Insane!

But it is happening, right now, albeit on a tiny scale.

“Preparations began in 2013 with meetings between Israeli and Palestinian officials, Israeli businessmen, rabbis, and Palestinian farmers. Thousands of farmers from Jenin, Tulkarem, Jericho, and beyond are participating…These growers can expect up to a 35% bump in business (this) year. This translates to about an extra $15 million to the Palestinian economy.”

According to Nasri Haj Mohammad, a partner in one of the largest participating farms, Shmita is the “year of the Palestinian farmers.” What is Shmita, he was asked? “The simple answer is, it’s a good season to sell the products at a premium price.”

So here is my plan. Shmita is a Mitzvah in the Torah with a wildly optimistic goal – the perfection of society, equality, no rich and no poor, the revelation of the full splendor of Divine light. We must admit those goals sound to us unrealistic, utopian, perhaps even naive. But that is the Mitzvah commanded to us by God which we take seriously. Sadly in our day, for the time being, we must give up being able to realize those goals.

But what if, as we sadly give up for now on those unrealistic goals, we focus on another goal – no less utopian, but certainly no more so; no less naive, but certainly no more so – the goal of the political transformation of society. Let’s use Shmita as an opportunity to buy, in large amounts, from Arabs who will agree to certain security conditions, in exchange for enormous economic advantage – in a way that at least has a chance of leading to peace.

I think it is objectively reasonable (not guaranteed by any means, but at least reasonable) that if there is any chance of peace, the best chance is to create a situation of economic self-interest in peace. And Shmita can be the impetus to do it.

This year, Israel is already spending more than $30 million to assist the small number of religious farmers who actually observe the Biblical laws of Shmita. Let’s take $100 million (I’m not an expert, just guessing) to support willing Arab farmers to feed Israelis in an effort to help create peace.

Yes, this could negatively affect Israeli farmers this year and in the future. And I don’t in any way minimize the impact this will have on the individuals who are affected. But the reality is that farming is now a tiny fraction of the Israeli economy. Imagine if we made a decision to hand off a portion of our agricultural economy in exchange for peace! Imagine the benefits that would bring everyone!

Is that utopian? Unrealistic? Naive? Maybe.

It’s certainly no more far-fetched than the original Torah vision of Shmita. And just imagine for one moment if an advance in peace was actually achieved through a Mitzvah – imagine what that would mean for Judaism and Jews everywhere!

The problem with this – and I know many people can’t wait to tell me how idiotic this is – is trust.

To dramatize this problem, I ask you to view a short video, just 38 seconds (here). You will see IDF soldiers and Arab boys playing soccer together – very friendly, very nice. But if you look closely you will notice the soldiers have their rifles in their hands. The rifles are not on their shoulders, or even held in one hand, but held in both hands, at the ready. And perhaps for good reason – I am not naive. This is the dilemma we face. We can play together – it’s possible and it happens. But only while holding rifles at the ready.

But what if we could use Shmita – unrealistic, utopian, naive Shmita – and just try. Wouldn’t it be a tragedy if it might work, and we don’t even try?

There is a poignant line in a wonderful movie, The Princess Bride: “I have been in the revenge business so long, now that it’s over, I do not know what to do with the rest of my life.”

The beauty of my plan is there is very little risk and no danger. It’s just money and vegetables. What if we tried to do something else with the rest of our lives in Israel – and it comes from Shmita?

About the Author
Rabbi Michael Whitman is the spiritual leader of the ADATH (Adath Israel Poale Zedek Anshei Ozeroff Synagogue) in Hampstead, Quebec since August, 2001. He is also a Sessional Lecturer at McGill University Faculty of Law, and creator if its Talmudic Law Moot Court Competition. Rabbi Whitman serves on the boards of Auberge Shalom…pour femmes, Cote St. Luc / Hampstead / Snowdon Eruv, Westmount Eruv, Rabbinical Council Conversion Program, and (former Executive Board Member) Rabbinical Council of America. He is past president of the Rabbinical Council of Montreal and past president of the Greater Montreal Board of Rabbis. Rabbi Whitman served for fourteen years as the spiritual leader of Young Israel of New Haven, Connecticut, USA. During that time, he worked at Yale University Hillel and taught at Yale University Law School.
Related Topics
Related Posts
Comments