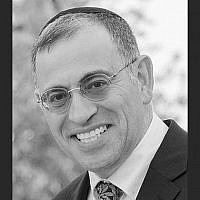 The Blogs
Moshe Abelesz
Apply for a Blog
Advertisement
Please note that the posts on The Blogs are contributed by third parties. The opinions, facts and any media content in them are presented solely by the authors, and neither The Times of Israel nor its partners assume any responsibility for them. Please contact us in case of abuse. In case of abuse,
Report this post.

I know where I stand at this election, and I know what I would like vote for, but unfortunately, I don’t see any party or leader that I can stand with.

Let me start with what should be my natural constituency – Habayit HaYehudi (Jewish Home).

When I made aliyah, I did not believe in sectoral parties. I believed that religious people should be fully functioning in society and be part of the main parties, not looking out just for their narrow interests. I also felt that Habayit Hayehudi’s (or the NRP as it was then called) platform was just too narrow for my liking. So, for my first three general elections, I steered clear of them.

I had a change of heart after the Disengagement from Gaza. Rightly or wrongly, I felt that as religious Zionist Jew, wider Israeli society was looking down on me, saw me as a destroyer of peace and backwards in outlook. I felt that my voice wasn’t being heard. Habayit HaYehudi, a coalition of religious Zionists groups, some more right wing to my taste, was the only party saying much of the things I wanted said. And so, for three general elections, I voted for it.

However, even before the merger with Otzma Yehudit, a far-right faction that offers extreme and simplistic solutions to complex problems, I had already decided that I could not vote for it again. For one main reason: Rabbi Chaim Druckman.

Rav Druckman is an incredible man who deserves admiration for his lifetime work and achievements. But this year he has been guilty of a very terrible crime, for which he must not be forgiven. His rehabilitation of a convicted pedophile is shocking for two reasons. Firstly, he has encouraged religious youth to believe in a conspiracy theory against them, that the Israeli courts and judges are dishonest, cannot be trusted and are out to get them. That in and of itself is disgraceful and has done so much damage, but even more shocking is that he brought this convicted pedophile into contact with children, who were subsequently abused by him.

So, what’s this got to do with HaBayait HaYehudi? Well, the leaders of HaBayit HaYehudi see Rav Druckman as their first port of call. They want his words of counsel and comfort. Protecting our children from child abuse is more basic than any other value, and they lost me then.

Their cynical deal with Otzma Yehudit, made for their own political survival, is mere confirmation that the moral clarity of HaBayit HaYehudi’s leaders has been compromised. It would have been better that they not pass the electoral threshold rather than make this deal. The fact that they were easily manipulated into this pact by Netanyahu, demonstrates how little backbone, both moral and political, this party actually has.

I am generally saddened by Habayit HaYehudi’s fall from grace, but I will be even more saddened if it survives. It has sold its soul and deserves to fall into oblivion.

Benyamin Netanyahu is very much disliked, but I never saw him as the harbinger of all evil that many believe him to be.

Despite the main claim against him from the previous election, that his policies would isolate Israel, the opposite has been true. Netanyahu has been a brilliant diplomat for this country. Never has Israel been so popular in Africa, India, China and even among the Arab nations. He has the ear of every single world leader, even that of Vladimir Putin.

Netanyahu was also strong enough to stand up against tremendous pressure from Barack Obama. Most Israelis understand that the Peace Process at present, is actually, the Get Israel to Make Strategic Concessions and Get Nothing in Return Process (which is why I stopped voting for Labour). Obama and the EU pushed him hard to make those concessions, and I do not know of any other Israeli leader who would have the strength to stand up to him. But Netanyahu did, and he deserves our gratitude for that. He also deserves our gratitude for getting sanctions on Iran reinstated and for getting the Americans to recognize Jerusalem as Israel’s capital.

Mostly though, I appreciate his caution when we were fighting wars in Gaza. He was never gung ho and was always hesitant about escalating events. He was measured, calm and calculated and despite all the pressure, he was very circumspect about sending in troops and far more focused towards gaining a ceasefire more than anything.

I don’t see anyone equal to his stature on Israel’s political horizon. But I can’t vote for him.

Netanyahu is on the verge of being indicted on criminal charges of corruption. It shouldn’t even be a question as to whether he steps down or not. He needs to move aside.

Additionally, while he is normally so calm and measured, his reaction has bordered on the hysterical and paranoid. He is encouraging conspiracy theories and politically machinating unpleasant deals. He gives the impression of someone desperately trying to cling to power rather trying than to lead. Netanyahu is on the verge of being Israel’s longest serving prime minister. It’s not politically healthy for one person to rule for so long, and it’s showing.

So what about the Labour party?

I voted for Labour when I first came to Israel, when it offered hope for a better future. But it tied itself to solely to the peace process and carried on with it well after most Israelis realised that the game was up. Labour is now beginning to realise that it has been flogging a dead horse and no longer claims its readiness to make painful concessions for peace. Instead it is now prepared to make those concessions and not demand anything in return. Seriously. I look at its leader and its list and just see desperate, angry and frankly negative people with little to offer and nothing to win me back.

So what else is out there?

The new hope is K’chol Lavan, a merger between Yesh Atid, led by Yair Lapid and newcomer into politics, Benny Gantz. They have agreed to rotate the office of prime minister between themselves should they win.

Yair Lapid might have some reasonable middle-class/middle Israel policies that I could identify with, but he comes across as very light weight and ineffectual. Additionally, while I don’t believe that he is the anti-religious crusader his father was, his party has become more sectoral and secular. He had once had religious people of the highest rank in important positions in his party, but they have been increasingly marginalised. I look at their (and the merged) list and do not see anyone who can speak with my voice.

The party is also undemocratic. I accept that a new party needs to time build its institutions and to run primaries. However, this is the third election the party is fighting, and it’s about time those institutions were up and running. The fact that Lapid has failed to establish these mechanisms indicates that he can’t get things done.

Now for Benny Gantz. He is popular and doing well in the polls. But, we don’t where he stands on the big issues of the day, and we don’t even know if he has the political and diplomatic skills to run the country. He should have joined an established party and worked his way up through the ranks and prove that he has the necessary political and diplomatic skills. The short cut he has taken worries me not just about his unhealthy ego and lack of humility, but whether he has the appropriate ability to lead a country.

The merger into K’Chol Lavan is artificial. It is not a coming together of like-minded people with like-minded policies. It’s a coming together of the anti-Netanyahu crowd and power-hungry generals. “Just not Bibi” is their only common policy. They have capitalists and socialists; and hawks and doves among their ranks. Should they achieve power, they would have difficulty not ripping themselves apart at the first challenges. In fact, K’Chol Lavan’s best chance for long term survival is to remain in opposition. So, I can’t really vote for them.

Religiously, I’m probably closest to this party than any other. However, this new party’s sole purpose is to stop the Likud from moving to the centre and to make sure it sticks to a right-wing agenda.  Firstly, that will fail. If the Likud decides to make a diplomatic deal with the Palestinians, it will find more than enough supporters on the centre and the left for it to be able to ditch HaYamin HaHadash. Secondly, I don’t think that pulling to the right is a good idea. It’s not healthy to be rigid. Flexibility is crucial for diplomacy, and Israel need to be seen to be flexible at a minimum. That makes it difficult for me to vote for them

I was only going to rate parties that are likely to cross the electoral threshold, but I think Zehut needs to be considered, for two reasons. Firstly, it might be the surprise of this election, especially because of the number of disillusioned Bayit Yehudi voters, and secondly, I have a few good friends who support it. So here’s my take.

Zehut has actually gone about things the right way. It has produced a manifesto – most of the others don’t bother with one anymore – and there’s a lot of positives in it. I especially approve of its libertarian economic policies. However, in the area of Israel’s relationship with the international arena, Zehut is even more inflexible and ideologically uncompromising than HaYamin HaHadash. Zehut cannot be a stable partner in any government, as it will be on the verge of bolting at every crisis. I cannot vote for such an inflexible ideology.

So what other serous parties are there? Kulanu? I don’t agree with Moshe Kachlon’s economic policies, which is his main platform. Yisrael Beytenu is an autocratic party built in the image of its leader that lives and dies with him. Forget that.

There’s the Haredi parties. Well, even if another pedophile defender wasn’t leading one, and a convicted criminal leader the other, I couldn’t vote for them because of their very sectoral interests, in only supporting their own communities.

One of the Arab parties? Erm…No. Meretz? Once upon a time I might have considered it, but that was a long time ago. Meretz now questions whether it is even a Zionist party anymore. It trusts Mahmoud Abbas, the leader of the Palestinian Authority more than it does Benyamin Netanyahu, and believes that peace would be around the corner if only we were just a little bit more flexible. So, no.

And so, I’m stuck. Maybe I should just start my own party.

About the Author
Moshe Abelesz is a Jewish Studies teacher, having taught in high schools in England and Jerusalem. For 17 years, he worked at the Lookstein Center for Jewish Education at Bar-Ilan University. He now works as a property manager for people who own property in Israel, but live abroad.
Related Topics
Related Posts
Comments