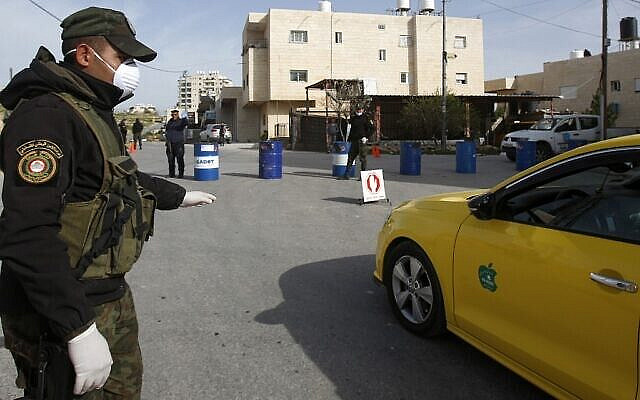 Palestinian Authority security forces man a checkpoint at one of the entrances to the West Bank city of Bethlehem on March 10, 2020, currently under lockdown due to coronavirus. (Musa Al Shaer/AFP)

In 2015, the well respected Palestinian Center for Policy and Survey Research released poll results that haunt me to today. It reported that two-thirds of Palestinians supported the wave of stabbings against Israelis that occurred during that time, with the same percentage backing a larger armed uprising. Sixty-seven percent backed the use of knives, while 66 percent of Palestinians polled said that an armed intifada or uprising would “serve Palestinian national interests in ways that negotiations could not.” Year after year we learn that Palestinians attempt more than three terror attacks a day. That poll, among other personal experiences I had with Palestinians, deflated my hopes for peace and raised my expectations of violence. Yet, I still had hopes that with the new Coronavirus restrictions keeping Palestinians indoors, we’d see a reduction in Palestinian terror attacks during the Coronavirus saga.

Our Yishuv – what some deride as a “settlement” – is forty three years old and thanks to God, the Israeli army and our top notch security team, has never suffered a serious terror attack. We live in a safe area relative to other more frequently attacked places in Judea and Samaria. That isn’t to say that our neighboring Palestinians don’t try. On a regular basis our town’s security team catches Palestinians trying to infiltrate our yishuv.

Yet I still hoped that with all the stress of quarantines and spreading illness, Palestinians would stop their terrorism during “coronavirus” and we wouldn’t have the extra stress of terrorism to deal with on top of everything else. At 3:00 AM on Thursday night our town’s air raid sirens sounded. As we’re not on the usual rocket trajectory I thought it was a false alarm, but as we moved our family to our bomb shelter we received text messages that Palestinians had successfully infiltrated our town and we were to lock all doors, turn off internal lights, turn on external lights, and have our gun ready. Thank God the Palestinian infiltrators didn’t harm anyone. Since then, they’ve tried to infiltrate again and the expectation is that they will continue to try.

I shouldn’t have been surprised. Palestinians are ruled by an authority that incentivizes terror through a “pay to slay” program that gives financial grants to terrorists based on how many Jews they’ve killed and honors the same terrorists by naming streets and schools after them. Is it any surprise that with a culture that promotes violence, even a global lethal virus wouldn’t hamper Palestinian attempts to infiltrate Jewish towns?

About the Author
Rabbi Uri Pilichowski is an educator. As a teacher, author and speaker, he teaches Torah and Politics, where he specifically emphasizes rational thought and conceptual analysis.
Related Topics
Related Posts
Uri Pilichowski
Comments