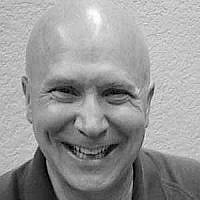 The Blogs
Harry Levy
Apply for a Blog
Please note that the posts on The Blogs are contributed by third parties. The opinions, facts and any media content in them are presented solely by the authors, and neither The Times of Israel nor its partners assume any responsibility for them. Please contact us in case of abuse. In case of abuse,
Report this post.

I made a mistake at the AIPAC Policy Conference. In spite of the fact that many of my rabbi friends decided to leave the hall to study text rather than listen to Mr. Trump’s remarks in person, I chose to stay.

I thought that if I were going to hear all the other candidates’ speeches, I should hear this one too. And, I respected AIPAC’s decision to invite all the candidates to speak. Perhaps I wanted to see what the showman would say. Maybe he would be a little entertaining in his outlandish behavior. Mainly, I wanted to see how he would react when his applause lines received little — if any – response from the audience. I was hoping (expecting) the AIPAC attendees to remain silent, as I intended to do.

Instead, well, now we all know what happened — the audience applauded and even gave Mr. Trump standing ovations.

I hoped it was for the pro-Israel comments he was making. He knew that many AIPAC members were still stinging about the Iran deal so he played that card over and over again. It was working. I was starting to worry about how the crowd was responding to Mr. Trump. This was the same candidate that only hours before had stated that Israel should repay the US for all the foreign aid it had received over the years. Why were they being so supportive? Didn’t they see his inconsistencies and also know that Mr. Trump couldn’t overturn the Iran agreement?

But toward the end of his speech, Mr. Trump said – at a particularly emotional point – “Obama may be the worst thing that ever happened to Israel.” I was stunned, first by his comment and then, by the reaction. It seemed to me the whole arena leapt to its feet clapping loudly and cheering. Mr. Trump had just made a terrible remark about our sitting president. I couldn’t comprehend how people – fellow Jews – could react to a misogynistic racist in such a manner. These are ‘my people,’ I kept telling myself. Don’t they know what they are doing?

AIPAC conducted this conference by promoting respect to all the candidates and conference speakers. Apparently, though, they forgot to tell the attendees to show respect for a sitting president.

The morning after, when, in an emotional statement, AIPAC Chairperson Lillian Pinkus made remarks of heart-felt apology to the President of the United States, with the leadership of AIPAC standing next to her, it was clear that what happened was disturbing to them, and undermined the position of AIPAC with many people, myself included. Many of the conference breakout sessions were devoted to the idea that one can be a progressive Jew and still support AIPAC. I have to say, that cause was set back significantly in just a few tense and disturbing minutes.

But, I can’t get past what the mainstream AIPAC member has become. I have concluded that because Likud has been in power in Israel for so long, that AIPAC, as an organization, has moved steadily to the right to represent the government of Israel in America. This frightens me. AIPAC badly wants progressives to stay engaged with the organization, but when I witness what I did last night, I find no place for me to participate. When the overwhelming majority of members in this organization can get up and cheer a demagogue who is denigrating our President, where do I fit in?

I love Israel. I am committed to supporting it in any way I can. I visit often. I support it financially. I pray daily for the safety of her people. I want to be an advocate for her. It was satisfying to lobby my congressional delegation as part of the AIPAC delegation. I want to support AIPAC as an advocacy organization for Israel.

But, I am deeply troubled and torn that my support for AIPAC somehow is aligned with a mindset that is so totally foreign to me. There has to be a way for progressive Jews to be advocates for Israel that doesn’t involve cheering a racist.

Yes, I made a mistake. I should have studied text outside the arena with my Rabbi friends. I would have learned texts from great teachers, discussing a tractate from the Babylonia Talmud about how human dignity overrides even biblical prohibition.

But, now, in retrospect, I am wondering whether I made a bigger mistake in attending the conference at all and supporting AIPAC. It was my first Policy Conference. It may very well be my last.

Harry Levy is treasurer of the Union for Reform Judaism and a businessman in San Antonio, Texas.

About the Author
Harry H. Levy, IV from San Antonio, Texas, is the Treasurer of the Union for Reform Judaism (URJ). He has served as a member of the URJ Board since 2006, leading and participating in numerous URJ committees including the South District Council, URJ Greene Family Camp Committee, and the Campaign for Youth Engagement advisory committee. He is a past president of Temple-Beth El in San Antonio. Levy is the owner of the The Levy Company, LP, which provides quality traffic management contracting solutions and services throughout south and central Texas.
Related Topics
Related Posts
Comments