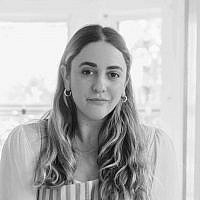 The Blogs
Atara Bernstein
Apply for a Blog
Advertisement
Please note that the posts on The Blogs are contributed by third parties. The opinions, facts and any media content in them are presented solely by the authors, and neither The Times of Israel nor its partners assume any responsibility for them. Please contact us in case of abuse. In case of abuse,
Report this post. 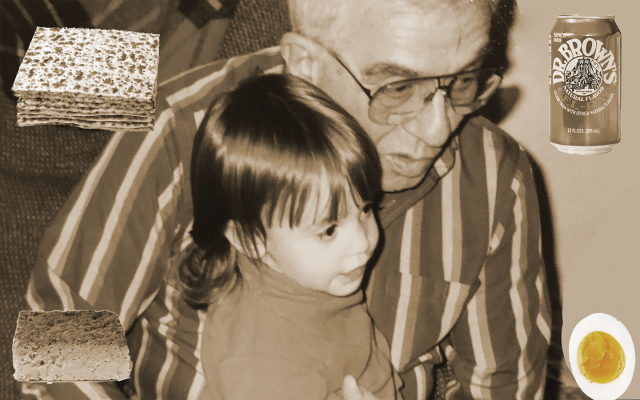 I’ve had the joy of spending several Passover seders with my grandfather, Henry. By the time the long awaited meal portion of the seder came around, my grandfather would insist on the strangest dish, a kind of DIY soup: hard boiled eggs mashed with salt water. I’m not sure if it was the imagined sulfurous flavor or the color (it took on a sketchy, gray hue), but the dish made me queasy. In retrospect, though, I’m thinking about the salty egg “soup” more generously. I’m attempting to understand the symbology behind it, and how the tradition came to be. On the seder plate, the egg represents rebirth and renewal, whereas salt water represents the historical suffering of the Jewish people. In a way the dish embodies the paradoxical harmony between the bitter and the sweet.

My grandfather died around this time last year. Since then, I’ve been reflecting on his impression on me and how his connection to Jewish food and his life experiences have given my identity a specific shape and meaning. What I enjoyed most about spending time with my grandfather was hearing him gush about his mother’s Jewish food from the old country: the potato kugel that she would make overnight on the stovetop; the gefilte fish that was always homemade, never out of the jar; the cholent with kishka so legendary that the whole community would beg her for a Shabbat invite just to have a taste. The love in his voice when he described these food memories were completely infectious. It was a treat that I don’t take for granted. Through my grandfather’s passion for these dishes, I’ve come to understand that my Judaism isn’t about the rules and laws I was taught to strictly obey, but the joy, love, and care embedded in the Jewish food tradition, and how those traditions bring our community, our family, and our stories together, generation after generation.

But honoring Jewish food traditions doesn’t always bring me pure joy. At times, these dishes remind me of periods of turmoil for the Jewish people and so I ask myself: why do I think about such hardships when musing about something that should bring me nothing but delight? This lamenting of the past and consciousness of the bittersweet is a familiar attribute in Jewish culture, and is emphasized by all sorts of Jewish traditions. I’m reminded of another Passover ritual: we eat maror (bitter herbs) with charoset (sweet and delicate mixture of fruit and nuts) to commemorate both our redemption and our adversity. Now is also a good time to call in Dr. Brown’s Cel-Rey Soda… In essence, this flavor combo is who we are.

Coupled with the sweetness of my grandfather’s beloved food traditions, we learned of a bitter history.

My great grandparents immigrated to the United States in the early 1900s. During Henry’s childhood, he would hear from his parents (in Yiddish, the lingua franca of the household) about their village in Poland, Prashnitz. He absorbed vague mentions about pogroms and antisemitism, but never in much detail, as his parents would revert to Polish when they didn’t want their children to hear what they were talking about, such as – he suspected – the graveness of the situation in Poland.

In 1943, my grandfather enlisted in the US Army, serving in the “Thunderbolt Division.”  In 1945, my grandfather’s unit liberated the Mauthausen concentration camp. Because he was the only one in his unit who spoke Yiddish, he was able to converse with the victims. He remembered a prisoner asking him for help contacting a daughter in Brooklyn, and recalled emaciated prisoners who got sick from eating food too quickly.

To this day, I can’t imagine what it must have been like for him to grow up with parents who implicitly hinted at the conditions for the Jewish people in Europe, and to then explicitly witness first-hand these realities. Did he imagine an alternate reality where this could have been his fate had his parents stayed in Poland? I wonder if he saw himself in the Yiddish speaking prisoners that he encountered, and if it inflicted an irreparable wound within him.

Fast forward to 2007: a relative conducted a genealogical study of my great grandmother’s family. The study included a family tree showing that Henry’s maternal grandfather was murdered in Auschwitz not long before Henry and his unit discovered Mauthausen. Prior to this discovery, my grandfather could not have fathomed his own personal connection to the Holocaust and the impact it had on his own family. He could not have known that his own grandfather died from the same savagery that he personally witnessed at Mauthausen.

Like my grandfather, until I learned this information, I did not identify as a descendant of the Holocaust. I had never felt like it was my story, despite my palpable feelings of agony when thinking or learning about it. Luckily for my family, most of my immediate relatives on both sides emigrated from Poland well before WW2.  Yet, when I reflect on my family’s story, I’m reminded of how familiar this numbing ache is for the Jewish people, even those who are not direct descendants of Holocaust victims or survivors. The inherited pain of fleeing, losing track of loved ones, leaving a community, the loss of the information about one’s family, adapting to a new culture and language, changing one’s name – all of these traumas are indelible and ingrained. It’s a universal Jewish experience repeated through the ages.

In learning about my family’s story, I keep thinking about the treasures and wounds that every Jewish person carries. So what does this bittersweetness mean to me now? Maybe that practicing Jewish food traditions today necessarily generates a twinge of sadness (have you cried into your potato knish lately? Highly recommend). But the scars are also a marker of our fortitude, and we need the sweet to withstand the bitter. Being one the oldest monotheistic ethnoreligions may come with its baggage, but it takes on a certain flavor too.

About the Author
Atara Bernstein is the co-founder of Pineapple Collaborative-- a community of over 100,000 women who love food. Named to Forbes’ list of 30 Under 30 in Food, she's been in the food industry for almost a decade, and Pineapple Collaborative has been recognized everywhere from Bon Appetit, Vogue, Forbes, and Vanity Fair to hundreds of other outlets.
Related Topics
Related Posts
Comments