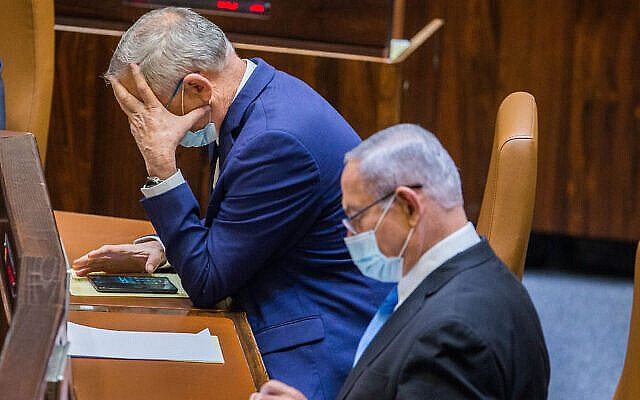 Benny Gantz and Benjamin Netanyahu: their mutual dislike was frequently transparent through their body language. (Oren Ben Hakoon/Flash90, Via TimesOfIsrael.com)

This morning, Israel woke up to the news that the Blue and White party will support a bill tabled by Yair Lapid to disperse the Knesset and trigger new elections.

The process of ugly recriminations and backstabbing that has been going on ever since the coalition was formed will continue in earnest.

Recounting the petty quotes leveled back and forth is useful only for triggering a headache.

I stopped following the details months ago.

Be’kitsur, the short version is that Likud blame Blue and White and Blue and White blame Likud — for the handling of the coronavirus crisis; for the disagreement over whether to pass an abbreviated or full budget.

Like children caught in a bitter and protracted custody dispute that has carried on for well over a year now, the ordinary Israeli people don’t really care about the details any more.

We’ve been here before. We’ve heard the arguments. We’re tired, fed up, and just want an end to it.

All but the most ardent of political anoraks have surely concluded that they have better things to do than hear these two squabble. 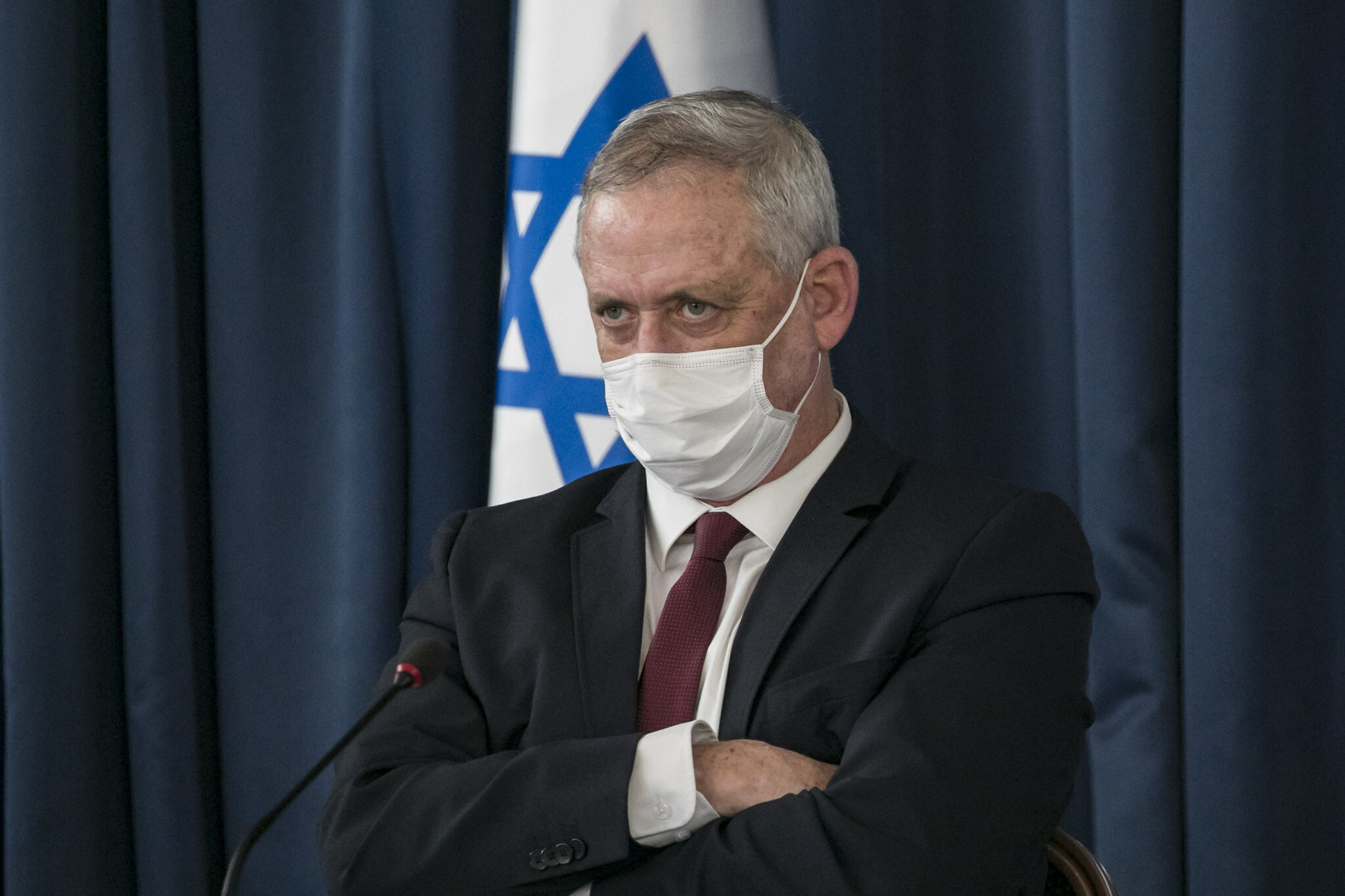 Gantz has looked exasperated in photos since the unity government took office.
Photo: Olivier Fitoussi/Flash90 (Via Times of Israel)

The budget and the coronavirus are really only the straw that broke the camel’s back.

The root cause of the rancor and ill-will that has oozed out of press releases and quotes is that the “coalition” in which Benny Gantz served as the “Alternate Prime Minister was doomed from the outset and marked by nothing but acrimony and infighting.

Calling this government a “unity” government was an almost ironic joke. An infighting faction can’t lead a country.

Even the foundational agreement out of which the coalition was formed — the prime minister rotation agreement under which Benny Gantz was supposed to assume the helm — seemed like a delusional pipe dream.

One would be hard-pressed to find anybody in the country — including, most suspect, Benny Gantz himself — who genuinely believed that the deal was going to go ahead.

One didn’t need to be an expert in body language, or have inside connections, to read the signs of ill-will between the country’s two “leaders.”

Gantz has looked worn-out and exasperated in photos with the Likud leader.

If one wanted to get caught up on the daily tit-for-tat, one could also open up the morning newspapers to read the latest salvos for oneself.

Social Protests Will Come To Nothing

Despite this state of affairs, I don’t see any change in the offing.

As a somewhat mitzva-following Jew, I don’t gamble. But if I did, I would be tempted to bet the contents of my apartment that the Israeli public will exonerate Netanyahu of any blame in the farcical situation to which the country’s political system has descended.

Yes, but to my mind, those protests amounted to a protest against democracy itself by a vocal minority of the population.

Netanyahu didn’t descend on Israel from another planet. Nor was he forced into office through a military coup. He was dutifully elected.

So what is there to protest — what has there ever been to protest? — if not the actions of the citizenry itself?

Like any democratically elected leader, Netanyahu is not forced to heed the demands of an angry mob. Only the dictates of the ballot.

Nothing But Likud Under The Sun

I wrote, a few days ago, about some of the innovations sweeping these shores. I think that the country is moving in positive directions. In spits of its politics and not because of it.

Nevertheless, I feel deeply pessimistic about Israel’s political future which — at this point in time — seems to bode a future of corruption, stagnation, and growing right wing nationalism.

If Israelis vote for Netanyahu again in the next election, as I predict they will, then they will show that the anger and protests directed toward the government over the past six months — and the pained cries of an Ashdod falafel seller—were for the most part hot air.

Throughout its voting history, the Israeli public has shown repeatedly that it is amenable to spin, rabble-rousing, and scaremongering.

A press release or two from Balfour Street pinning blame on the government’s collapse on Benny Gantz and large segments of the population will be instantly bought out.

Because, by capitulating to Netanyahu’s demand to form a doomed government, and by buying into the illusory promise of one day becoming Alternate Prime Minister, Benny Gantz showed that he is guilty of the worst sin in the eyes of many Israelis: being weak; being a freier.

Next March, if Israel goes to its fourth election in two years, the country’s citizens will have a chance to put their ballot papers where their mouths have been for the past year.

I will neither be voting for Netanyahu nor Benny Gantz. To my mind, both are culpable for the situation Israel finds itself in. One in which a government, seething with hatred for itself, mired in backstabbing, is forced to go to repeat elections during a pandemic — for the second time.

I predict my vote will be in the minority.

I hope that I am proved wrong.