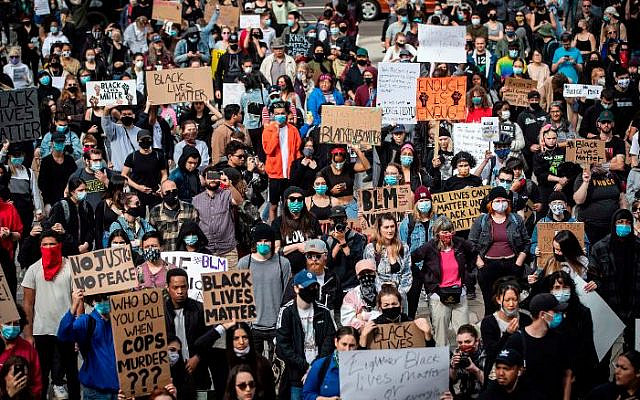 London — buildings have been vandalized, police have been attacked.
Los Angeles — kosher stores and synagogues looted by people protesting police brutality.
San Francisco — many smash-and-grab thefts carried out under cover of the protests.

Against this background, I start to write my blog  ……….

For the third time that day, I carefully checked my bank account. I still did not have enough for that 58-inch full HD television, that I wanted, no, that I needed. I gazed longingly at the TV, sitting tantalisingly in the shop window then moved on. Back home, I had almost put it out of my mind when it came to me, I could exercise my inalienable right to protest.

Just to make sure, I glanced at the copy of the US Constitution that I keep on my bedside table. While it was a little difficult to follow the legalese, and the amendments every time the writers changed their minds, it did seem clear that I could protest about anything that took my fancy.

I went straight to the local Protest Shop. There was a large range of protest equipment available, from small hand-held signs suitable for children up to age five to massive banners for hanging on your balcony. As protests could break out at the drop of a policeman’s baton, and leave little time to prepare suitable banners, most of the protests were suitably vague. From the few specific causes, I chose a small banner protesting the horrific treatment of the Melanoides Tuberculate snail in the Zaporizka Nuclear Power Plant cooling pond in the Ukraine. (For interested readers, they sent snail-eating predatory black carp after them.)

I added a couple of sharp-edged rocks – ‘guaranteed to break any shop window’ – to my basket and joined the long queue at the check-out.

Holding my banner aloft, clearly visible to any inquisitive policeman, I went straight to the TV shop. I shouted the obligatory, I protest, and heaved the stones at the large plate-glass window which shattered into a thousand pieces. I was just about to complete my protest by reaching for the TV when a nearby policeman called for me to stop.

There’s a lot of dangerous glass, he said, let me help you protest safely – we police must enforce the Health and Safety regulations. Together, we pulled out the huge TV, it came without protest.

Back home, watching the crowds of protesters “shopping” American style on my new television, I was happy that I had been able to protest. For, as Albert Einstein once said:
“If I were to remain silent, I’d be guilty of complicity.”

So, to sum up the message of this blog – Protesting is an inalienable right, recognised by the United States Constitution. Rioting is a crime. We should not refer to rioters as protesters as this implies that their actions are not criminal when, in fact, they are.