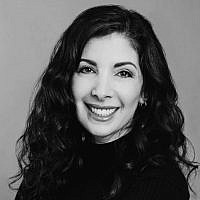 The Blogs
Ronit Plank
Apply for a Blog
Advertisement
Please note that the posts on The Blogs are contributed by third parties. The opinions, facts and any media content in them are presented solely by the authors, and neither The Times of Israel nor its partners assume any responsibility for them. Please contact us in case of abuse. In case of abuse,
Report this post. 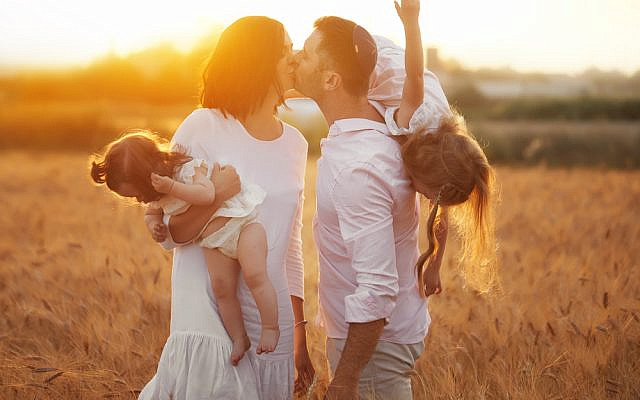 A Jewish family of four outside at sunset, sourced from contributor OES on Shutterstock

This Pesach I will proudly post photos of my Seder table on Instagram and Facebook, but not so long ago I avoided announcing to the world I was a Jew.

As a kid growing up in the New York area I was one of the only Jewish kids in my grade; I knew I was different but didn’t really want to be treated that way. My father wouldn’t let us have a Christmas tree or, even after my sister and I begged, a Hanukkah Bush. But I loved singing the Christmas songs our chorus teacher taught us for the P.S. 20 winter concert every year; I got a kick out of sneakily celebrating the holiday that wasn’t mine. Every December we performed on risers in the stuffy auditorium, sweating in the winter hats and scarves that our indomitable chorus teacher had us don for effect. “The Little Drummer Boy” gave me shivers every time I pa-rum-pa-pum-pummed but when we sang “The Dreidel Song” at the very end of the concert, a part of me felt included and seen.

As a teenager and in my early twenties in NY I didn’t feel my Jewishness that much, nor did I seek it. The city at large seemed to know what menschen, shmears, and putzes were and it was the same in Los Angeles where I moved in my late twenties. Yiddish was part of the lexicon and I didn’t have to call myself out as a Jew because for the most part I blended in. But when I began a family of my own and we relocated to a city where Jews weren’t as common, I recognized all too clearly how I stood out.

As a Pacific Northwest Jew I was more conspicuous and the Jewish community was less ubiquitous. In the early years here I found myself saying, “it’s because I’m Jewish,” to explain—before anyone even asked—why my hands moved so much when I talked, my Borscht Belt facial expressions, how often I used Yiddish. Looking back, I can see my shoulders hitched almost to my ears, an ingratiating smile on my face almost—I am embarrassed to recognize now—an apology for my otherness.

But something shifted when my kids grew old enough for religious school. I began to bask in my Jewishness. I taught Hebrew reading and writing to third graders, and Holocaust history to seventh graders at our synagogue. I also did some substitute teaching at a local Jewish private school, and we’ve had Shabbat dinners here at the house every week since my tall teenagers were babies.

For nearly a decade now I’ve been acknowledging my Jewishness whenever I can and not in a performative way. I embrace it because it’s who I am and I have a sense of responsibility to make my presence known. I wondered if other Jewish women felt that way, too. I asked Diana Kupershmit, a social worker who writes in her memoir Emma’s Laugh about her experience growing up as a Jew in Soviet Ukraine and then coming to the States, if she felt a responsibility to identify as a Jew in public ways. “I really do,” she told me. She, like me, used to keep her Jewishness under wraps. “In my younger years, especially after coming to this country, I was reluctant to publicly identify myself as Jewish,” she says. “I think that fear was embedded in my DNA. You didn’t talk about it. It was still a stigma I carried with me into adulthood.” But these days she brims with Jewish pride and feels that, “given our history and everything that we’ve overcome I think we have to be loud and proud. I think there’s no other way.  Just because of historically the way we’ve been put down and annihilated. We have to stand up for our identity our Jewishness.”

Debbie Lechtman, creator of Roots Metals and a Latina Jew, also shifted her approach in recent years. “Though I’ve always loved being Jewish,” she says, “I feel that I used to “whitewash” or downplay my Jewishness around others. I never wanted my Jewishness to make others uncomfortable. Since I started my work with Roots Metals, though, I’ve gained so much confidence living publicly as Jew. It’s definitely been quite a journey, but knowing that I have such a large Jewish community behind me inspires me to wear my Jewishness openly and proudly!”

Debbie’s Instagram feed is devoted to Roots Metals jewelry as well as Jewish facts, Holocaust history, and antisemitism education. She says she does feel compelled to live her Jewishness out loud. “Not because of my work on social media, but because my ancestors went through and survived SO much for me to even be here right now. I can’t imagine “throwing it away” (for lack of a better term), knowing so much of what they had to endure.”

Last Fall I got to meet Jessica Kupferman, CEO of She Podcasts and an Ashkenazi Jew while I was at the She Podcasts conference for women podcasters. I asked her if she too identifies herself as Jewish in her work. “Yes, always, always, always,” she told me. “I mean, it’s not part of my job title or anything, but I do discuss it on my show, and I allow for Jewish holidays and celebrate them on social as well as other Jewish milestones and traditions… I feel obligated to be proud of my heritage and not to hide being Jewish. I tell everyone, it’s a huge part of my personality and culture and humor.”

I had the privilege of being a speaker at the She Podcasts conference and though I hadn’t intended to, I used the words schmuck and mensch and schmooze in my presentation. When I heard laughter from attendees, I grew more animated. My facial expressions kicked into high gear and soon my hands were doing half the presenting for me. When I caught myself, I told the mostly non-Jewish audience that I couldn’t help but use Yiddish and talk with my hands because I was a Jew. They laughed and I finished my presentation to applause but I felt a tug of worry. I wondered if I had exaggerated my Jewishness for the wrong reasons or if I had been true to my authentic self, albeit with an extra bit of chutzpah.

Afterward, as I greeted the attendees who gathered to ask me questions, a young woman wearing a wig, below-the-knee skirt, thick tights, and modest blouse approached me. “I want to thank you,” she said, “for being so public about your Jewishness. I’m afraid to do that where I live and I appreciate it.” My worry about leaning too far into my Jewishness instantly dissolved. Learning that this Orthodox woman felt encouraged by my Jewish presence reaffirmed for me why I live a publicly Jewish life.

This is why I post pictures of my Shabbat candles, my Hanukkiot, and my Seder table. This Pesach l honor the ways being Jewish makes me different; how I blend in with other Americans and how I don’t. I’ll reflect on how far I’ve come from the person I was in childhood who wanted to ignore my Jewishness to the young mom-me who almost apologized for it, to the woman I am now who celebrates it. I claim my Jewishness because some Jews might not be ready or safe enough to. Being able to is a privilege I don’t ever want to take for granted.

About the Author
Ronit Plank is a writer, teacher, and speaker. Her debut book is the memoir When She Comes Back and her articles and essays have appeared in The Washington Post, The Atlantic, The Seattle Times, The New York Times, The HuffPost, The Rumpus, Writer’s Digest, and numerous literary magazines. She hosts the podcasts The Body Myth, And Then Everything Changed, and Let’s Talk Memoir. You can find her on FB, Twitter & Instagram at @ronitplank and at www.ronitplank.com
Related Topics
Related Posts
Comments