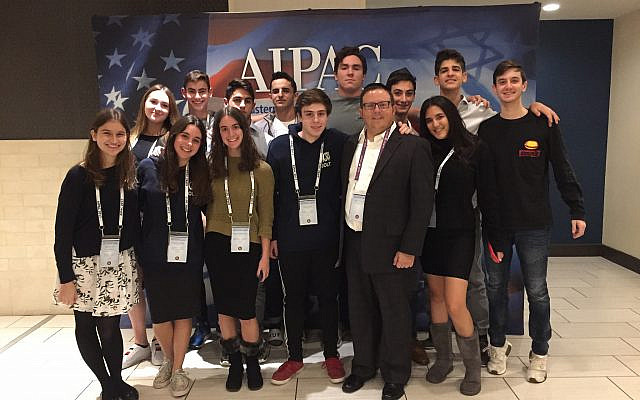 Students at an AIPAC Conference. (courtesy)

I have been a proud member of AIPAC for over 10 years. During that time I’ve watched the US-Israel relationship change drastically. Twelve years ago, I had a conversation with my Congressman, Henry Waxman, and we tried to identify one issue that had nearly as much bipartisan support in Congress as Israel – we couldn’t name one that even came close. Now, just a little over a decade later supporting Israel still enjoys bipartisan support, but the first cracks in that support are evident. I am apprehensive about continued bipartisan support in the coming decade.

In the past year or two I have heard friends make contradictory comments about the U.S.-Israel relationship, Congress and AIPAC. My friends have said that support for Israel is a sure thing. They’ve claimed that AIPAC’s main focus, securing close to four billion dollars of U.S. military aid a year for Israel, isn’t necessary. They’ve also said that Democrats hate Israel, are borderline antisemites and will cut funding to Israel. Yet, we have a Democrat majority house and not only was Israel’s funding not cut, it went up this year. How, pray tell, I ask them, did the anti-Israel majority led Democrats in the house pass funding for Israel?

I am not privy to the exact numbers, but I’ve seen rumors that AIPAC spent upwards of thirty million dollars fighting the Iran deal – and lost. My friends say that the loss demonstrated AIPAC’s impotence and how irrelevant it has become. How, I ask them again, did Iran’s nuclear ambitions, support of terror and Middle East creeping influence become such a major issue of the Trump campaign, administration and Americans? North Korea, Cuba and Russia should all be playing as loudly in American foreign policy – but they aren’t.

I have every reason not to renew my AIPAC membership. AIPAC is an American organization and I moved to Israel five and a half years ago. I am a Jewish resident of Judea and Samaria (a “settler” in the West Bank) and AIPAC refuses to support us against those who use us to delegitimize Israel. AIPAC supports the long dead two state solution; playing into the hands of those who set aside possible progress on the Israeli-Palestinian conflict in favor of an unrealistic but pleasant sounding sound bite. Lastly, the Likud, Blue and White and all right wing parties include annexing the Jordan Valley (where I live) in their agendas for governing, ensuring that it will be the policy and hopefully the actual plans of the Israeli government and yet AIPAC has yet to come out in support of it. These issues are not only important to me, but they affect my daily life.

President Obama wrote a memorandum of understanding with Prime Minister Netanyahu that gave Israel an unprecedented amount in annual U.S.-Israel military aid. Congress has to approve the funds annually. That approval is subject to a vote and requires a majority of Congress to agree. Congress is controlled by the Democrats, who as we know, are sounding hesitant on giving Israel aid automatically. Even some Republicans aren’t fans of foreign aid to Israel. These members need someone to engage them. There is NO other organization having those conversations with reluctant members of Congress. Congress will not approve these funds without a strong lobby explaining it to them. AIPAC lobbies for bipartisan support of Israel, it lobbies for annual American military aid to Israel, and it acts as a light tower shining a bright light on the threat Iran poses. I’m concerned about the future of Israel’s bipartisan support and that’s why I renewed my AIPAC club membership today. I encourage you to do the same.