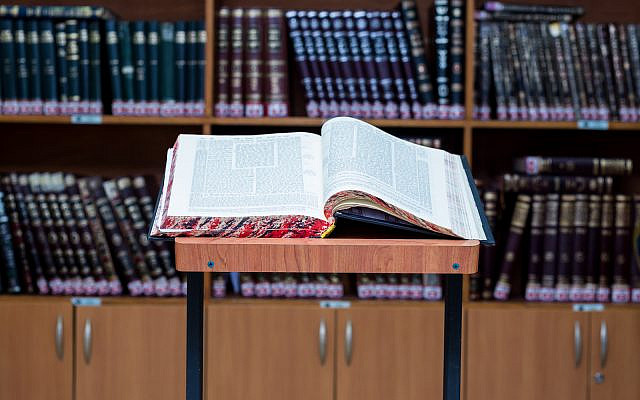 I sat in a room full of people today, watching a live stream of Hadran’s Sium HaShas for women, and thought, what a time to be alive.

And I also thought of you, my daughter.

Earlier, when I was about to leave our home and go to that room full of people, you sang “goodbye-hug-time” at the top of your voice, leaped across the room, and threw yourself against me. I held you and thought – you are so precious, my daughter. What will your life be like, what with your brilliant smiles and more brilliant mind? You, who dance your way through streets and dreams and conversations. What roads will you dance through as a maiden, as a woman? To what heights will you aspire? What kinds of summits will you seek?

I thought back to these questions later, as I watched one outstanding woman after another stepping onto a large stage in distant Jerusalem, and sharing their love of the Talmud – and their insights into it. I thought of them as I watched the crowd in Jerusalem – thousands upon thousands of women – laughing and crying and clapping for all they’re worth. And I thought of them when more and more women, all of whom learned the entire Babylonian Talmud by working their way through each day’s daf yomi (daily page) for the past seven and a half years, crowded the stage to read out the “hadran,” the text Jews traditionally say upon completing a masechet (tractate) of the Talmud (or, in this case, the entire Babylonian Talmud).

Each of the women on the stage represented her own outstanding achievement. But standing together, and surrounded by so many celebrating hearts, they represented so much more than that; they represented, my daughter, the open horizons of your generation’s future. When I was your age, women who learned daf yomi were rare – and easy to dismiss as eccentrics. But who would dare dismiss that crowded stage, and that even-more-crowded hall around it?

And who would dare dismiss this room here in Boston, I thought, and looked around me. Eighty women and men from all over Boston gathered to Maimonides school to participate in this day’s celebration. Who would dare dismiss us, and all the other crowded rooms around the Jewish world, that partnered with Hadran to celebrate this historic day?

“I hope that the ceiling you reached”, said the Rabbanit Michelle Cohen Farber on that stage in Jerusalem, addressing those rare and oft-dismissed trailblazers of Talmud studies for women,“will be tomorrow’s floor.”

I don’t know yet which roads you will want to explore, my daughter. But your path is wide open, and it’s yours to traverse.

“Shaping and structuring time,” said the Rabbanit Gilla Rosen before we watched the live stream from Jerusalem, “is a central part of our lives as Jews.” Rabbanit Rosen was discussing the opening Mishna in Masechet Rosh Hashana, where the sages decree that there are four “new year’s days” in the Jewish year. Like many other communities around the world, and as part of Hadran’s program for today’s historic Siyum for women, the Boston community divided an entire tractate of the Babylonian Talmud between different women, with the intention of finishing the entire Talmud between the many volunteers around the world. (Incidentally, there were so many willing volunteers that the women of the world finished 60 tractates between them in the past month – the equivalent of the entire Talmud and a half). Here in Boston, we covered masechet Rosh Hashana under the leadership of the local organization “Ma’ayan – Torah Study from the Sources“, and Rabbanit Rosen came all the way from Jerusalem to participate in our local Siyum. 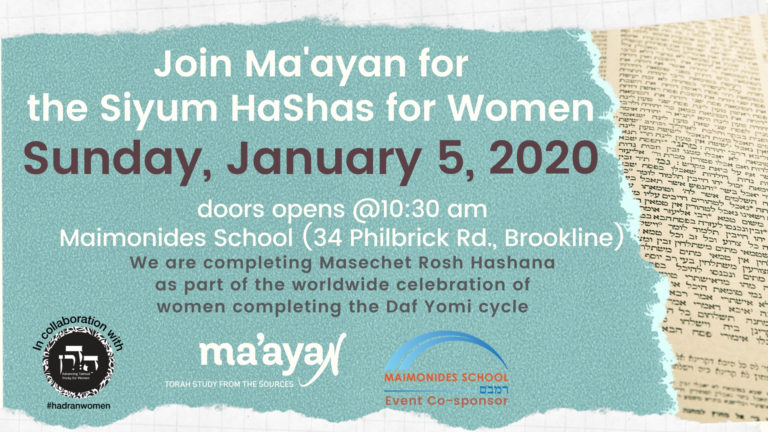 But while Rabbanit Rosen’s words referred to a particular text, they captured, somehow, the spirit of today’s celebration. By dedicating time for learning daf yomi every day, the women who stood on that stage in Jerusalem shaped their time into something beautiful and awe-inspiring. They fused deeper meaning into their daily routines, and turned a large segment of their time on earth – an entire seven and a half years period! – into one extended exercise in constancy and illumination.

I didn’t earn my place among these dedicated women: my entire repertoire of Talmud pages before today consisted of the one page of Masechet Rosh Hashana that my shul took upon itself this month. But by joining the time I dedicated to learning to the time other women dedicated to learning, I stepped beyond the bounds of my own span of time and my own earned achievements. For one glorious moment of shared love and sisterhood, I was so much more than myself.

My daughter, I thought as I tasted that moment, you already shape your times in many ways. You dedicate it to various interests and pursuits, questions and feelings. You infuse it with rhythms by inserting into it “goodbye-hug-times” and “Ima-is-back-hug-times.” I can’t wait to see how you will shape your time as you grow up, and awaken to all the horizons ahead of you. My hope for you, darling, is that you will shape your time and life with hands that will combine the constancy of the women on that stage in Jerusalem – and the communal spirit in this crowded Boston room.

And so it was that, upon arriving home, I opened the first page of the first tractate – masechet berachot, and found myself, once again, contemplating the meaning of time.

The very first words of the Talmud ask a question: “From when (that is, from what time), does one recite Shema in the evening?” And until when does the time for the recitation of the evening Shema extend?

The sages disagree regarding the second question, and their disagreement stems from the ambivalent meaning of a particular Hebrew verb – the verb ‘lishkav,’  to lie down. We learn that we have to say Shema in the night and in the day from the biblical verse “Take to heart these instructions with which I charge you this day…Recite them…when you lie down and when you get up.” (Deuteronomy 6:6-7). But does the expression “when you lie down” mean immediately after the act of lying down, just as the expression “when you get up” clearly means a particular moment immediately after the action ‘getting up’? Or does it mean something like ‘during the time when people are in a state of being prostrate in bed’?

Ultimately, the majority opinion in the Talmud accepts the second interpretation, namely – that ‘lying down’ means an ongoing state. Thus the sages conclude that the time for saying the recitation of the evening Shema isn’t limited to the early part of the evening but can rather be extended deeper into the night.

Perhaps by decreeing that “when you lie down” describes a different kind of action  than “when you get up”, namely – a continuous state instead of a sharp and short action, the sages meant to do more than tell us when to recite the Shema. Perhaps they meant to draw our attention to the fact that we experience time in two fundamentally different ways. Sometimes, we experience time as a continuum – a way to measure an ongoing state. It is this sense of time that underlies statements like “I am alive”, “I have been married for twelve years”, or “I will live in Boston for the next few months.” We sense that a particular experience extends beyond the moment, and it’s this continuity that we attempt to capture in words.

At other times, we experience time primarily as an arena of change. When we say “I was born so and so years ago,” or “we got married 12 years ago,” or “I will move back to Israel in the summer,” we’re speaking of moments when our reality transforms. Each of these moments cuts the continuum of our existence into befores and afters. Each of them interrupts, starts, or ends the more extended, continuous states.

Perhaps by telling us that we should recite the Shema when we are in the state of lying down and when we do the action ‘getting up’, that is, in times that match the two modalities of our experience of time as continuous or interrupted, respectively, the sages call upon us to see both of these modalities of time as arenas for our relationship with God.

My daughter, I don’t know if I will succeed to dedicate a part of each day to learning Talmud for the coming seven and a half years.

But I can try.

I can try to consistently and actively introduce some learning into each of my days, and thus harness both continuity and change – both of our modalities of time – to the process of pursuing our generation’s horizons. And I can do so hoping that whatever modest heights I will achieve, my daughter, you will one day use as a springboard; as a floor.