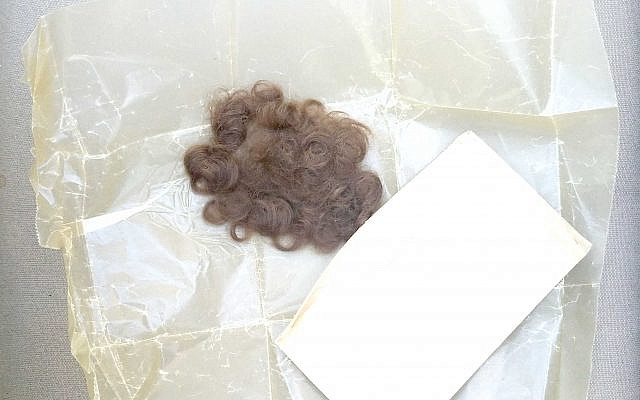 Last week I threw away my hair.  Not my scalp hair, of course.  Most of that went away a long time ago, all by itself.

The hair I threw away was in a small envelope, on which my mother had written, “Third haircut, March 1948.”  Wrapped in waxed paper, the locks were brown and curly.  They had held up well.

My mother passed away last year.  I found the hair in a box, among what she had kept in her apartment.  After a long life, she left behind relatively little, a result of successive and successful downsizing.

We all save things: clothes our children grew out of; childhood drawings; school report cards and projects; greeting cards from family and friends; diplomas and plaques; letters and post cards; souvenirs of visits and trips; and of course photographs—prints, slides, cellphone snapshots and videos.  Some people keep diaries, so they can hold tight to passing thoughts about daily ephemera.

All of us save, but savers span a spectrum.  At one end are hoarders who can’t let go of anything.  Such savers may need decluttering consultants to help them clear a path from sofa to kitchen.   At the other end are aggressive discarders.  They revel in all their space, but may feel less smug when they need to change their name on a Real ID driver’s license and can’t come up with an old utility bill to prove who they are.  The rest us of savers fall somewhere in between.

We call what we save “mementos,” and tell ourselves, if not in so many words, that we keep them because we want to remember what they remind us of.  Then we put them in envelopes or folders or boxes, which then go in closets, attics, basement storerooms, behind things, under things.  Diaries gather dust, or pixels, mostly unread.  If we even recall that we saved something, chances are we don’t know where we put it, or even where to look.  Mementos surprise us when we stumble upon them.  We have been fine without them for years or decades.  But we still can’t throw them out.

We can’t throw them out because these objects and images mean—so we tell ourselves—something important: about crucial times and special people, about our lives, about ourselves.  Surely those are too important for us to forget, to consign to oblivion by throwing them out.  Surely, what seems so important to us about ourselves will be, at some point, of some interest, to someone.  Surely.  To discard them is to admit otherwise.

So we save them.  And think we’ll get back to them someday.

As we grow older, we collect stories about keepsakes dragged out from underneath clutter in forgotten closets.  Sometimes these stories make the news: a found letter by a famous writer, a lost painting, the original reel of a classic movie.   Such stories stir the imagination, but most closet tales are more prosaic: of heirs wading through messy rooms filled with old furniture, of overstuffed closets, boxes of letters no one can read and photos no one can identify.  Those who come after have to negotiate what is left when sentiment has overcome sense.

So we all try to balance the two.  Others will judge how well we succeed.

Along with my leftover locks were photos of my mother holding me when I was too young to need haircuts.  She posed in front of Pennsylvania Cigar Factory No. 345, her neighbor’s backyard retirement project.  She was young—barely older than our oldest grandchild is now–in a strange town, far from family.  What thoughts and dreams were going through her mind then, and a year later when she saved the hair from my third cut?  (And what happened to the hair from the first two?!)

When her own father, my Zeyde, passed away, Mom found in the desk drawer of his night table her first-grade report card.  Her teacher had praised her efforts and predicted a bright future.  A proud father and hopeful immigrant, Zeyde had kept it close by for sixty years.  Whether my mother saved it herself I can’t say, nor can I recreate what went through her mind if she did not.

Until I found them last week, I had done quite nicely without my infant locks for even longer, over seventy years.  And so, rather than leave the task to perplexed descendants, last week I threw them out.

But first, I photographed them and filed the photo somewhere on my computer.