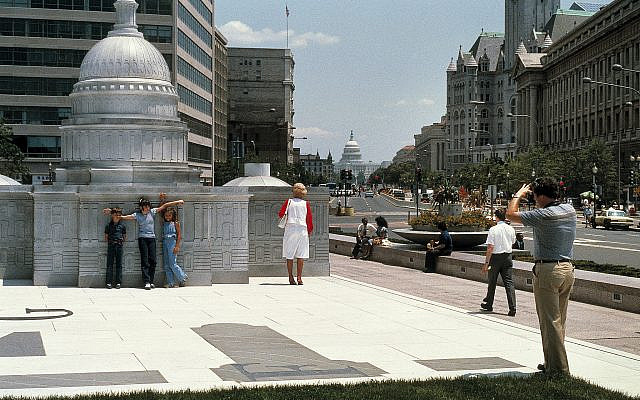 I tore down the US Capitol Building. No, I wasn’t one of the clown-car insurrectionists banging through the Capitol doors earlier this month. I was a young idealist with a crane and a plan. I did commit a crime that day, but I don’t think anyone is coming after me for it.  Though I came away with regrets, I also gained an insight that has lasted me a lifetime: that we only can understand one key thing at a time, and we best understand what we can see or even better, touch. It may also provide a small insight into mending the torn plan which is our national unity, about what and whom we trust, and why.

The scene of my demolition of the Capitol was indeed on Pennsylvania Avenue in Washington DC, but a little closer to the White House at the Western Plaza, now known as Freedom Plaza.    It’s a rectangle of land right in the center of the street in which there is a public plaza.   The paving pattern of that park is a reproduction of the plan of the city around it, the very plan commissioned by George Washington in 1791.

The Plaza was designed by architects Robert Venturi and Denise Scott Brown Architects (VSBA*).  Their design concept was to draw visitors into the remarkable history and significance of their Pennsylvania Avenue surroundings using the pattern of the paving which is the plan of the city around them. It was inlaid with historical text and features that gave insights and connections to its surrounding.   There were intended to be two three dimensional sculptures, one of the Capitol and one of the White House [photo, a].   You see the original plan of the Capitol Building inlaid in bronze [b] at lower left and a patch of lawn representing the National Mall [c] beyond it.    While an architecturally savvy bird flying over might have understood the creative irony that the plaza itself was located within its own pattern [d], when the sculptures were put on hold, the whole thing fell literally, a bit flat.   Then in 1981, the DC artistic powers-that-be wondered if they hadn’t erred in nixing the sculptures.   VSBA was commissioned to erect two full-scale models of the sculptures for review by the Architect of the Capitol.   They had to be convincing full-scale representations to be erected,  reviewed, and demolished on the same day.  Now working for VRSB, and having put myself through school as a cabinetmaker, a machinist, and a carpenter, I was asked to be the project architect/fabricator.

I formed a team, set up a shop, and started scaling up the building by projecting slides of historic drawings for hours onto blueprint paper on a wall.    Venturi’s vision of post-modern ornamentalism was still controversial in the early 1980s.  If you look around at the nearby soulless granite-clad building-blobs that DC preferred after WW2, that won’t surprise you.  My team set off casting flattened ionic capitals, cutting arches and turning Thomas Ustick Walter’s majestic dome on a ten-foot lathe I hacked together, between visits by Bob Venturi to the sawdust and fumes of an unused floor of his renowned office.  We finished the whole thing with a splatter paint finish meant to at least hint at a marble then trucked the pieces to a waiting crew of union riggers, who surprised us with their delicate re-assembly.  We furtively touched it up in the wee hours of the morning, our only crime of the day: non-union work in an all union town.

As we waited for the Architect of the Capitol to arrive for his review, I saw what you see in this picture.   Yes, the cute family posing for a photo.    But what opened my eyes was the woman in white on the right.   She walked up to the model and ran her red-sleeved fingers over the details, the cornices, the arches, the capitals, then looked up at the real Capitol Building, then down looking closer at the model, and up again to the  Capitol building beyond.   The woman in white was understanding how something so monumental, so much bigger than herself fit together;  what the people that made these grand edifices of government and architecture were trying to achieve.  She could touch it.   I watched people doing this over and over again, it seemed irresistible. 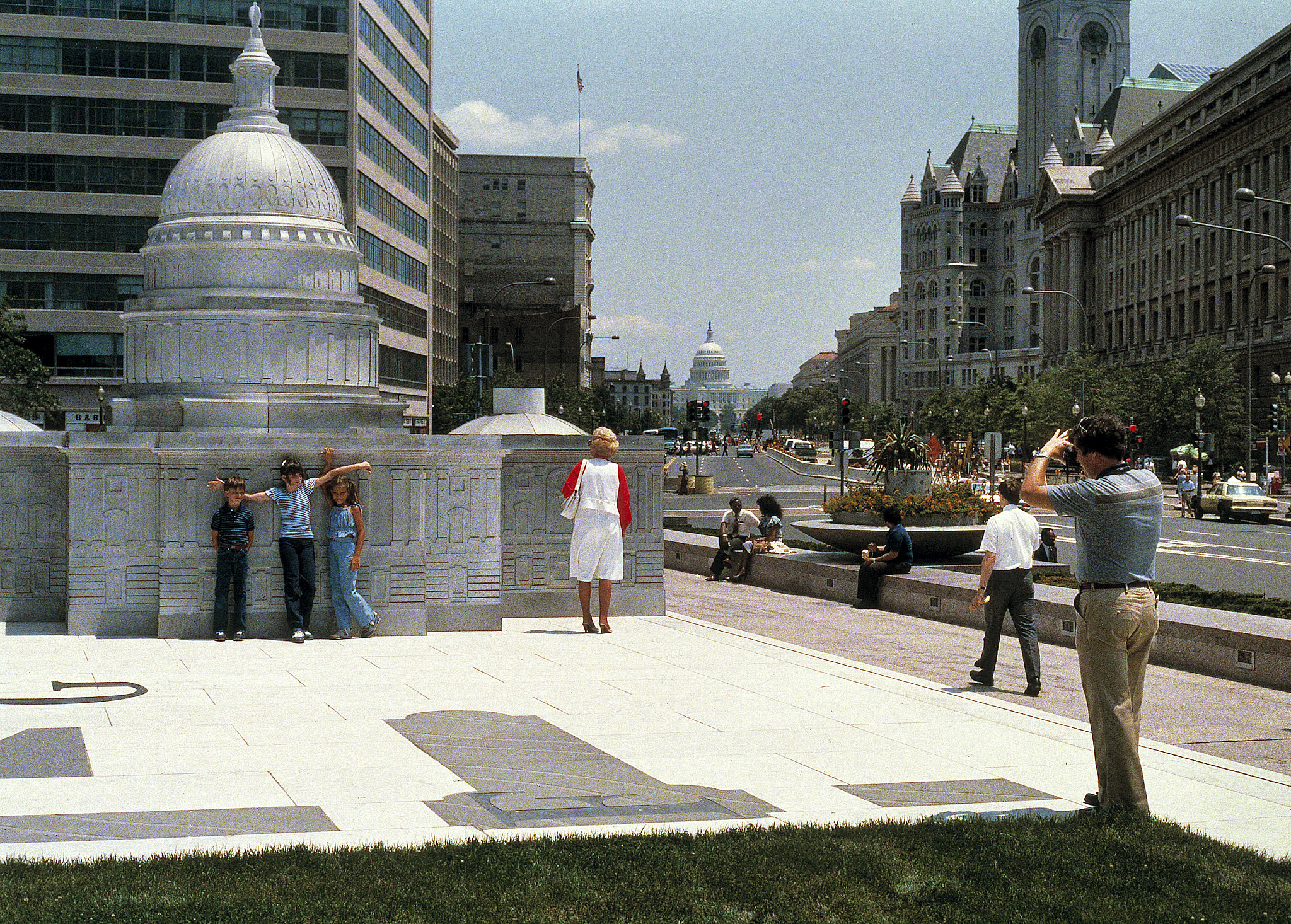 We relate to what we can touch.

Without touch, people lose faith.    Pew Research has been a study for the last forty eight years that measures Americans’ “Confidence in Institutions”.  It tells us that over the last ten years, the institution that Americans trust LEAST is not big business (20%) or police (above 50%),  organized religion (above 40%), or even the news (a dismal mid 20%)   The institution Americans mistrust the most, ironically, is the one they choose for themselves, the US Congress, hovering between 7% to 13% approval over the last ten years.  More people than that approve of Limburger cheese.

I believe it is because Congress has lost “touch”.    Within a short drive of this Capitol, there are entire school districts where not one student can show proficiency in math.  This year, three times more people have died of drug overdoses (699) than of Covid (235) in the Speaker of the House’s congressional district and in the omnivorous shadow of Covid and nationally, 70,000 died of drug overdoses in the US, increasing every year but one in the last twenty, The Congress that governs from below that lovely marble dome, whose sole purpose in life should be to prosper and protect its constituents, has lost touch with their needs.   What are the institutions that Americans consistently trust the most?  Small businesses (75%) that they visit and touch, and the military, an astonishing 72%.   Why?  Because Americans rightly believe these are actually serving and protecting them.

Before I demolished the US Capitol Building that day,  the Architect of the Capitol doomed the project with faint praise, saying “I don’t know what to say. Close up, I love them, and far away, I don’t like them.”   With that, my next job was axed.    The rampant inflation that lost Jimmy Carter the presidency, had interest rates stuck at around 20%.   No one was building anything and architecture was in a deep recession.   There was only one other project on the boards at VRSB:  a design competition for the National Mosque of Iraq.   The client who signed the checks was a fellah you might remember:  Saddam Hussein himself.   As a Jew, I asked to opt-out, in light of Saddam’s abysmal record of executions and confiscations of Jews and their property.   I just couldn’t let his money burn a hole in my pocket.

My wife and I married around that time and I came back from our honeymoon to find someone else sitting at my desk at VRSB.   I lost my job to Sadaam.  No need to apologize, Saddam.   I got the girl and hung up my own shingle too.  I’m still at it, you aren’t.   A month later, the National Mosque project collapsed, with Saddam and his cash increasingly preoccupied with his war with Iran.    The mosque design jobs were gone too.

Seeing folks touch that sculpture and appreciate their world and their history was part of the goal that the architects were trying to achieve at the Western Plaza by skillful use of a relatable set of cues.   It showed me there could be a deeper purpose to creative work.   I still try to use a narrative to organize the creative goals of a project, one that reflects the project’s users: about family, about service, about faith, society, or power:   a story told in light, structure, materials.  A story that understands history and creates some of its own.   I don’t usually tell my clients the little bit of poetic framework in my head, they don’t hire us for poetry.   We talk in the language of budgets, building codes, deadlines, and yes sometimes of beauty and lasting values.   But I still try to capture that excellent moment from the day I tore down the Capitol, of seeing the lady in white with the rose-red sleeves, having a moment of revelation from something I built.

* at the time VSBA was known as VRSB, Venturi Rauch and Scott Brown