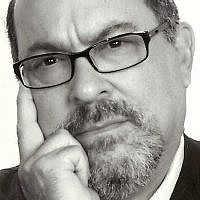 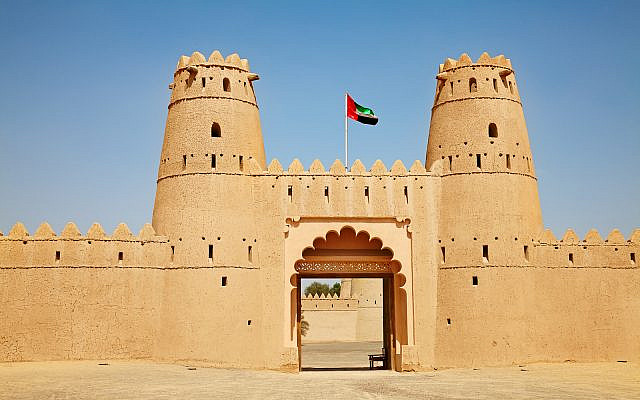 Faraj was the final member of his prominent Emirati family to learn I was Jewish. The family patriarch was away on business in Abu Dhabi City so he missed the spring-time dinner when I revealed to my “adopted” family that their “uncle” happened to be Jewish.

That fall I had been hired by the United Arab Emirates University to be its new journalism “expert” for the 2008-09 school year, a time when Barack Obama was elected President, war raged in Gaza and the Great Recession ravaged the world’s economy.

The national university is located in Al Ain, a city of 400,000 residents situated on the Oman border, 170 km inland from Abu Dhabi City. It is the ancestral home of Sheikh Zayed bin Sultan Al Nahyan, the nation’s founder and messiah-like figure to Emiratis, and the second-largest city in the Emirate of Abu Dhabi. Some call it the most Emirati city in the country, and it is built around an ancient 4,000-year-old desert oasis.

When I applied for the job, a question on the university online application had given me pause – it asked for my religion. I inhaled deeply and then input Jewish. Their country, their rules, I thought. There was no way UAEU would hire a Jewish American as its journalism expert. But I was hired – by the two Americans on the search committee, and only one of them, the department chair, apparently knew I was Jewish.

I don’t even think Dean Donald Baker, a Canadian, knew my religious heritage. Before school began, he arranged a small tour for some new faculty to the UAEU female campus. When I pointed out the barbed wire surrounding the campus, I asked whom it was meant to keep out, thinking terrorists. His memorable response was, “It’s not meant to keep people out; it’s meant to keep the girls in.” He later became university provost and then moved on to the Qatar Foundation.

The news last week that Israel and the United Arab Emirates had agreed to a peace deal and to establish diplomatic relations completely surprised me. I thought about Emirati Passport Control agents whose primary job seemed to be searching for Israeli visa stamps in order to deny entry to anybody having one. But then I wasn’t surprised because I understood the Emirati concept of insha’Allah, God’s will. Maybe this first step, something I think of as a “big, small deal” will blossom into a “big, big deal.”

Of course, I thought, Zayed’s sons, headed by Crown Prince Mohammed, run the UAE. They could do this — they rule the country. Not only do the Al Nahyan control a nearly trillion-dollar sovereign wealth fund, the large family controls every important governmental portfolio, including the military, foreign affairs, energy (90+% of the oil is in Abu Dhabi), justice, interior – and, of course, Mohammed’s half-brother, Khalifa, Zayed’s first-born son, is President of the UAE and Ruler of Abu Dhabi. No other Gulf Sunni oil kingdom had the wealth, concentrated power and ambition to do it first.

I thought: What can I tell Jews and Israelis about Emiratis and the UAE?

Certainly, I would not talk about whether this budding agreement will lead to a broader Middle East peace or a Two-State Solution. I’ll leave that to other “experts.” I could give my thoughts about tourism, shopping, business, investment, high-tech, food, booze, religion, and traffic. (It’s crazier than Tel Aviv!) Of course, I could describe the country’s underbelly, exploited foreign workers, caste system, oil business, legal system, diabetes, population (There are about one million Emiratis out of 9.6 million people), and much more.

Instead, I’ll focus on people. They are at the core of my UAE memoir, “My Pashtun Rabbi: A Jew’s Search for Truth, Meaning, and Hope in the Muslim World.” As a journalist, I always tried to tell stories about the world through people. For all of my students, I was the first Jew they had ever met. That held true for most others. Some, but not most, discovered the fact that I was Jewish at different times and in various ways.

I will say that I never had a single negative reaction. About a month into my second semester, after I thought my all-male class of 36 young men, hailing from all seven Emirates as well as Oman, Syria, and Jordan, knew me, I stood in front of them and said, “I’m Jewish. Does anyone have a problem with that?”  No one did – but we had a very spirited and inspiring discussion.

When I first heard about this peace agreement, my thoughts turned to several people. I thought about Samah, a fiery young woman of Palestinian descent born in Abu Dhabi. She dreamed of smelling the olive groves in her family’s ancestral home, with no hope of ever doing so. I never knew my star student and the class valedictorian was Palestinian until our last class together, during the opening days of the 2008-09 Gaza War, when she realized I was Jewish and let her feelings be known.

A Ph.D. focused on narrative journalism, now the mother of two, may finally be able to legally travel to Israel to visit her family. We both believed that day would never come. Although our friendship survived the 2008-09 Gaza War, Samah broke it off during the 2014 Gaza War. At the time, I worked at Hillel International (long-time friend Eric Fingerhut, then Hillel president and now President and CEO of the Jewish Federations of North America, asked me to join him) and when Samah learned I was an executive at a major pro-Israel organization, she told me never to talk to her again. But about a year ago she unexpectedly reached out to me, and now I hope to one day meet her in Jerusalem and smell those olive groves together.

There’s Noor, a proud and devout Pashtun expat, who I met on the first night of Ramadan when I hailed his taxi. He may have started as my taxi driver, but he soon became “My Pashtun Rabbi,” and had, and continues to have, a special place in my heart and mind. For most of the last 20 years, he has worked in the UAE and supported his extended family in Pakistan, rarely seeing them. They had to leave the tribal areas of North Waziristan because of violence, and are now reestablishing themselves near Peshawar. Noor is a truck driver and one of the finest men I have ever known. His life is an inspiration. I hope that we will meet in Jerusalem where I know he would consider a visit to the Al Aqsa Mosque, the third holiest site for Muslims, a major religious milestone.

I met Faraj because his daughter, Fatima, was one of the four students enrolled in my Computer-Assisted Reporting class. On the first day of school that class had been scheduled to meet in what was a woman’s toilet (another story and told in my memoir). He decreed soon after we met that I was his “brother” and his children’s “uncle” – and I was treated as such. We did many things together and I was expected to dine with the family frequently. He never told me, but I learned that his grandfather was integral to Zayed’s rise in prominence and that he was the venerated sheikh’s nephew and his Al Nahyan cousins were the country’s rulers. He never dropped their names. For someone with so much wasta, which I learned is the country’s most-important currency, Faraj was, and is, a real mensch.

The evening after I told the family about being Jewish, Fatima called and said that her father was back from Abu Dhabi City and that I was expected for dinner at 9 p.m., insha’Allah.

As soon as I entered the majlis, Faraj spotted me and called for Layla, the family’s Ethiopian maid, to join us.

Layla wore a small gold cross. Faraj pointed at it and looked me in the eye. “Christian.”

He placed his hand over his heart. “Muslim.”

Then he reached out and touched my chest. “Jewish.”

“We are all cousins.” Then he pointed up to the sky. “All the same God.”

David Eden, the author of “My Pashtun Rabbi: A Jew’s Search for Truth, Meaning, and Hope in the Muslim World,” selected as one of the Best Books of 2018 by Kirkus Reviews, was the journalism expert at United Arab Emirates University in 2008-09.