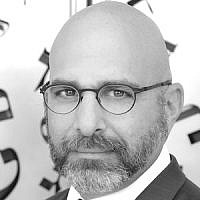 The Blogs
Joshua M. Aaronson
Apply for a Blog
Advertisement
Please note that the posts on The Blogs are contributed by third parties. The opinions, facts and any media content in them are presented solely by the authors, and neither The Times of Israel nor its partners assume any responsibility for them. Please contact us in case of abuse. In case of abuse,
Report this post.

If you study any Talmud at all, it is not too long before you get to the story of Rabbi Eliezer and the Sages, led by Rabbi Joshua arguing over the kashrut status of a particular kind of oven. Each side summons as much support as possible: ‘If I’m right leT this carob tree move; if I’m right let the walls of the Beit Midrash fall in.’ Eventually, Rabbi Eliezer summons a Heavenly Voice to support his argument — which it does. Rabbi Joshua rejects the Heavenly Voice with the famous line, ‘it is not in Heaven…’ meaning that since the Torah has been given to us, we here on Earth decide the law and not a Heavenly Voice. Rabbi Joshua, on behalf of the Sages invokes one of the operating principles of the Talmud, namely, that the Halacha follows the majority. Yet, in doing so, the Sages overrule Eliezer, contradicting a competing operating rule that the Halacha is always according to Rabbi Eliezer.

When this passage is taught to novice students, the lesson often concludes at that point in a kind of feel-good moment for the rule of the majority. But, the passage actually continues. Eliezer is ex-communicated for his unwillingness to accept the ruling of majority and a series of increasingly problematic events cascade toward a spiritual catastrophe that results in the death of Eliezer’s brother-in-law, Gamliel.

I feel as though we are living in the midst of this Talmudic moment. The Jewish world is divided over the issue of the Iran agreement and each side is marshalling its forces to prove its point. “If I am right, let Nobel Prize-winning scientists say so; if I am right let Alan Dershowitz say so!’ I expect at almost any moment a carob tree to go flying by me.

One of the teachings of this passage is that a fight-to-the-death between zealots will lead to consequences that cannot possibly be foreseen and will never be good. And yet, here we are, each side marshalling its forces to prove the other side wrong. As each side trots out another supporter, the tone of the debate devolves into the kind of language and tone that is so strongly rebuked by rabbinic tradition. The Jewish world doesn’t need Iran; we may well be on our way to destroying ourselves with the baseless hatred emerging from this debate.

With this passage in mind and the voluminous other rabbinic texts that speak to this same point, I made a decision in conjunction with my colleagues at Temple Judea that we will not be speaking about the Iran agreement from the Bima during Shabbat or Holy Day worship services.

Although this is a crucial issue in the Jewish community, I have concluded that our sanctuary is not the proper venue because the discord has become acrimonious to the point that I fear baseless hatred will seep into the walls of our holy space.

As the spiritual leader of our community and the person entrusted for the moment with guarding the sanctity of Temple Judea’s holy space, I want everyone to find compassion and comfort during worship services, most especially at this time of year. I want our sanctuary to be a safe place. Equally important, I want the atmosphere in the sanctuary and the building to be one of joy and friendship. I do not want the sharp edge of this issue to come between members of this community as we move into Elul and then the Holy Days. I do not believe I can achieve these goals by speaking about this issue from the Bima.

I balance this decision with the responsibility of all Jewish leaders, myself included, to share with our communities our thoughtful, heartfelt responses to important matters. I understand it is incumbent upon rabbis to contextualize the issues of the day and most especially issues concerning our people and the State of Israel. However, after watching the debate about the JCPOA escalate and turn increasingly nasty, I concluded that I best serve the Jewish people at this moment by focusing upon the harmful nature of this debate which is becoming more serious than the issue itself.

Jews often say to me that they don’t find meaning in worship or they don’t understand the reason for worship. THIS moment is THE reason: so that Jews and those that cast their lot with the Jewish people can come together to say and sing and pray the ancient words and through this communal act, turn them into something relevant and inspirational. I say to every person seeking to worship with us in the next few weeks, you will be welcome and you will be embraced. I don’t care whether you support the deal or you don’t. Come and learn. Come and pray.

I first studied the story of Achnai’s oven in my first year as a rabbinic student. I recall with great clarity thinking to myself that there was no possibility the brilliant minds of our people who created the Talmud itself and so much more could allow any debate, let alone a debate for the sake of Heaven, to spur the destruction of our people. I most certainly never thought I would live to find myself in the middle of the beit midrash while the walls are tumbling down.

We are a better people than this. We are a people who have survived millennia through the power and creativity of our intellect. We have been defined, in large part, by our willingness to conduct arguments for the sake of Heaven in every sense of that phrase. I am unwilling to believe that we cannot find a path through this most difficult moment that is more compassionate and more in line with the Jewish values we all esteem.

About the Author
Joshua M. Aaronson is the Senior Rabbi of Temple Judea in Tarzana, California. He is a Senior Rabbinic Fellow at the Shalom Hartman Institute in Jerusalem.
Related Topics
Related Posts
Comments