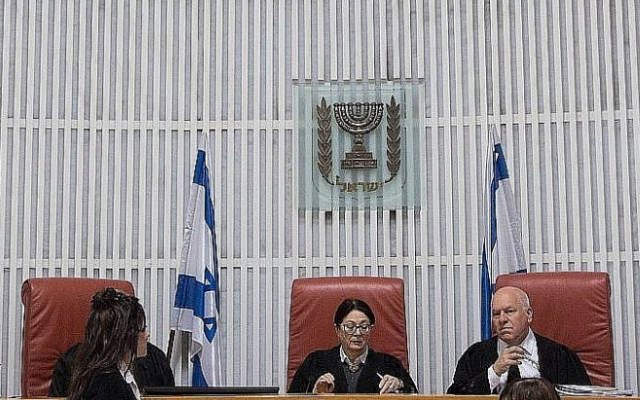 It is widely thought unreasonable for the legal system to reverse political outcomes. But when the outcomes are themselves sufficiently unreasonable, even reasonable people start to wish for it. And so we find ourselves with the Supreme Court this week set to determine whether a criminal defendant can establish the government of Israel.

If the judges summon up the courage to disqualify Benjamin Netanyahu or poke enough holes in the unity deal he reached with Benny Gantz, is there any way to turn back the clock around 5 weeks? Might Gantz somehow resume efforts to set up a center-left coalition?

The fact that most people would emphatically say “no” underscores just how much we’ve been through since Gantz agreed to subordinate himself to Netanyahu despite having the recommendation of a majority of Knesset members for prime minister. And yes, it’s hard to imagine former ally Yair Lapid rejoining Gantz after furiously accusing him of betraying voters and “crawling” to Netanyahu.

But politics is about tough choices. Such a scenario does not seem less reasonable than three election campaigns in a year, nationalist Avigdor Liberman joining the left, or a prime minister actually trying to hang on to his seat while under trial for bribery.

The realization that nothing is impossible anymore is why in the run-up to the Supreme Court hearings there’s been so much agitation. No less a luminary than minister Yuval Steinitz said this weekend that a ruling disqualifying Netanyahu, whose bribery trial begins in weeks, would be a “terrorist attack” against democracy.

Such thinking is not to be taken lightly. Judges may have the last word on interpreting the law, but they are not infallible. They make mistakes and their power should be checked. But they also are essential to preserving civilizational norms and preventing dictatorship of the majority — for which they must be freed of the momentary whims of a majority.  Moreover, they tend to be informed, intelligent people who can be expected to reflect on the big picture and try to do the right thing for society. All that cannot be said of every voter – much less of every politician.

So they are easy prey for populists who try to turn this into a question of the people versus the elites. It is a politically useful tool for cynics who have done the math and discovered  that the masses are more numerous. Netanyahu has invented nothing here: Fascists did this in Europe; Peronists did it in Latin America; Trump does it in the United States. It can work well when the demagogue is talented. That’s why some think the right would be happy if the Supreme Court showed some spine this week. The next Likud campaign would be all about clipping its wings, which would be bad for society but possibly good for the right.

So the stakes are high. What can we expect from the court?

There seems to be nothing in Israeli law expressly forbidding a prime minister from taking office while also being a criminal defendant. Indeed, the law  enables a prime minister with sufficient chutzpah to retain his position until a final Supreme Court appeal. You don’t need to be a jurist to suspect that there is not a strong case to block the prime minister based on existing law, and that is what Attorney-General Avichai Mandelblit advised this week.

On the other hand, Israeli courts have made widespread use of the “reasonableness test” inherited from British legal tradition, blocking scenarios subjectively deemed to manifest “extreme unreasonableness.” Down this path things look less rosy for Netanyahu. The proposition that criminal defendants cannot serve as junior ministers (or much of anything else in public life) but can establish the government is not just unreasonable; it is absurd. It is a notion that would have been inconceivable at any other period in the country’s history, or in most democracies on earth.

In ruling on a slew of petitions, I doubt the judges will have the courage to actually make that maximal call. What they might do, though, is to disqualify enough sections of the unity government agreement to cause it to collapse. There are more than enough items there to chew on: the scheme to keep Lapid’s people on the Blue and White list out of the Knesset should lawmakers-appointed-ministers resign the chamber to make room for the next candidates on the list; the shortening of the Knesset term; the restrictions on the Knesset; the concomitant swearings-in, in effect, of two prime ministers. I don’t know if these and other oddities are legal or illegal; but they do seem unreasonable.

It is common to think that if the coalition agreement falls apart the result will be a “fourth election.” But does it really have to be so?  If I were Gantz I would be preparing for this scenario, even if it’s unlikely. Netanyahu surely is.

Under the current circumstances it is hard to imagine Lapid, Liberman, Meretz and the Arabs falling in line. But I don’t think it’s impossible. Gantz would have to do what Bibi does so well: drive the narrative:

Then there are the Blue and White rebels, who pushed him into his current corner: high-minded political pickpockets Zvi Hauser and Yoaz Hendel. Gantz could now tell them that he tried everything possible to establish a unity government, at great cost. They could ask no more, and now it is either a “minority government” or that unspeakable horror, new elections (in which they’d be gone). On top of which, Likud will have an open invitation to join without Netanyahu.

It is a true spectacle in self-satisfaction as Hendel explains why he blocked such a government before. He argues there was no alternative to a unity government but another election. But by refusing to back a government “dependent” on the Arabs he and Hauser created that situation. There’s no possibility for the non-right to win without the Arab vote, which is a fifth of the population. Opinion does not shift so far; the condition is impossible.

In starry-eyed fashion, Hendel also says he wants unity to “heal” Israeli society.  That sounds a little bit more honest, and also more reasonable. You want to heal Israeli society, Hendel? Drop your injurious blacklisting of the Arabs, and end the circus of corruption that has been brought this week to the Supreme Court for validation. Two birds; one stone.