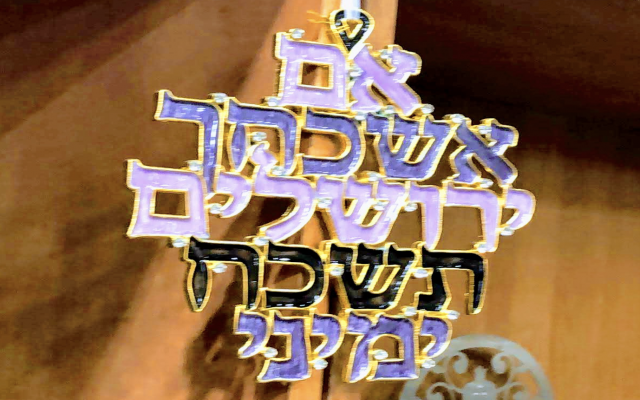 What’s frightening in life is not knowing what’s going to happen. For example, this week I read that with Covid this past year, the lifespan in the U.S. actually decreased by about a year and half for males to 74 and for females to 80. In my mind, that is pretty scary since it’s really not all that old especially if you think in terms of all the amazing scientific and technology progress we’ve made over the last century. So we don’t know when we are going to die and what will happen before we do!

Relating this to a friend, he told me that regardless of how long he has to live, he feels that he has lived a good life and has no regrets. At any point, he said, if G-d wants to “take me home,” well he’s at peace with it. While I certainly respect his faith and courage, at the same time I replied that as I look back on my life, there are definitely things that I regret—mistakes I made, bad choices, things that I said or did that I wish that I could take back or do over—and in whatever time left, I want to try and fix everything that I can. Realizing, of course, that we can only try our best, and the rest is in G-d’s merciful hands.

Now of course, like most people, I’ve made good decisions and bad, done good things and ones not as good, and deep down, I wish I did better. Like many, I believe, that I look at every new day as an opportunity to try and “perfect” things and my relationships, as much as I possibly can. Not that we are always successful, but I see this as our purpose for being here in the first place—to learn, to grow, and tikkun olam. Then I went on, that on top of all this, in whatever times G-d grants me, I would like at some point, to be able to make Aliyah and live in the Holy Land of Israel. This is a dream that I inherited from my parents before me, and is my personal yearning as we sing in The Hatikvah:

To be a free people in our land, the land of Zion, and Jerusalem

The timing of this exchange couldn’t have been better given this week’s Torah portion, Va’etchanan, in which Moshe pleads with Hashem to let him enter the land of Israel. But Hashem would not listen to Moshe’s prayers, and he was destined to die outside of Israel. In synagogue today, the speaker mentioned, that the Gematria for Va’etchanan (pleaded) is 515, and that according to the Midrash (Devarim Rabbah 11:10), Moshe actually prayed that many times to beseech G-d to let him enter Israel. After all, Moshe’s whole purpose and mission in life was to bring the Children of Israel out of Egyptian bondage and take them to the Promised Land. Further, Moshe wanted it so much, but even the hundreds of prayers of Moshe Rabbeinu were unfortunately denied by G-d (Deuteronomy 3:26) as Moshe said:

The L-rd was irate with me because of you and did not heed me, and the L-rd said to me: Enough for you, do not continue speaking to Me anymore about this matter.

Moshe’s fate was sealed at the Rock of Meribah where the people complained to Moshe for water, and G-d told Moshe to take the rod and speak to a particular rock and water would come forth, but instead Moshe struck the rock with the rod demonstrating perhaps a lack of patience or of his very high level of faith, and so G-d forbade him from entering the Holy Land of Israel. It was a devastating punishment for the leader of the Israelites who had brought them for 40 years through the desert from Egypt to Israel. But G-d is our judge, and His word is the final say on any matter.

In a sense, this is a tough thing to accept in life, while also being comforting in a strange way. On one hand, it is tough to accept that we, as mortal human beings do not have ultimate control over what happens to us. Sure, we can control what we do, say, and think (to some extent), but ultimately, the decision of what actually happens to us is G-d’s alone. On the other hand, it is comforting to know, that our lives, while not in our ultimate control, are in G-d Almighty’s merciful hands.  Moreover, if we believe in G-d’s ultimate goodness and graciousness then we can have faith that everything He does is for the best anyway.

Sure, we may not fully understand G-d’s decision on not letting Moshe into the land of Israel (or decisions that affect our lives today), still we can affirm our faith that G-d is a just and merciful Judge. For example, we can have faith that G-d put Joshua in charge for a reason to take the Jewish people forward into Israel and to conquer and settle it, even while Moshe passed away outside the land and was not allowed to enter. Aside from Moshe’s personal mission in bringing the Jews to Israel, the importance of the land of Israel to all Jewish people is emphasized by Jerusalem being named 669 times in the Tanach and the synonym, Zion, being mentioned another 154 times for a total of 823 mentions in our most holy religious texts!

In the end, none of us are the level of Moshe Rabbeinu, and if G-d didn’t let him in, well who are we? This is a frightening thought to me. Yet at the same time, I believe that if we as the Jewish people collectively put our heartfelt yearnings and prayers together to be able to go and settle the land of Israel then perhaps G-d will answer us in the affirmative!

Despite all the comforts that we may experience where we live around the world now-a-days, after the horrors of the Holocaust just 76 years ago, I am confident that many still long to fulfill the dream of Jewish freedom and national independence in our historical homeland—to experience the miraculous redemption to the land of Zion and Jerusalem! Of course, this will only happen if G-d grants us the opportunity in His everlasting mercy and blessings for the continued ingathering of the Jewish people that have not yet made it home. May G-d return all of us on “wings of eagles” and bring us the longed-for peace for Israel and redemption for all of Mankind.